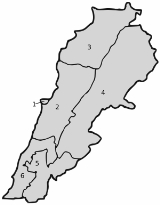 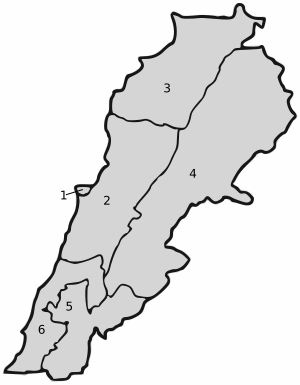 Lebanon
Lebanon
Lebanon , officially the Republic of LebanonRepublic of Lebanon is the most common term used by Lebanese government agencies. The term Lebanese Republic, a literal translation of the official Arabic and French names that is not used in today's world. Arabic is the most common language spoken among...
is divided into six governorate
Governorate
A governorate is an administrative division of a country. It is headed by a governor. As English-speaking nations tend to call regions administered by governors either states, provinces, or colonies, the term governorate is often used in translation from non-English-speaking administrations.The...
s (muhafazah
Muhafazah
A ' is a first-level administrative division of many Arab countries, and a second-level administrative division in Saudi Arabia. The term is usually translated to governorate in English, and occasionally to province. It comes from the Arabic root 'h-f-ẓ' which means to 'keep and guard'...
), listed with their capitals in parentheses: