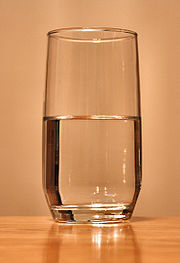 This list of glassware includes drinking vessels (drinkware), tableware
Tableware
Tableware is the dishes or dishware , dinnerware , or china used for setting a table, serving food, and for dining. Tableware can be meant to include flatware and glassware...
, such as dishes, and flatware used to set a table for eating a meal, general glass items such as vases, and glasses used in the catering industry whether made of glass or plastics such as polystyrene and polycarbonate.

Drinkware, beverageware (colloquially referred to as cups) is a general term for a vessel intended to contain beverages or liquid food
Food
Food is any substance consumed to provide nutritional support for the body. It is usually of plant or animal origin, and contains essential nutrients, such as carbohydrates, fats, proteins, vitamins, or minerals...
s for drink
Drink
A drink, or beverage, is a liquid which is specifically prepared for human consumption. In addition to fulfilling a basic human need, beverages form part of the culture of human society.-Water:...
ing or consumption.