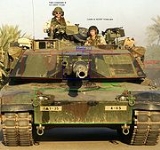 Encyclopedia
A glacis in military engineering is an artificial slope of earth used in late European fortresses so constructed as to keep any potential assailant under the fire of the defenders until the last possible moment. On natural, level ground, troops attacking any high work have a degree of shelter from its fire when close up to it; the glacis consists of a slope with a low grade inclined towards the top of the wall. This gave defenders a direct line of sight into the assaulting force, allowing them to efficiently sweep the field with fire from the parapet
Parapet
A parapet is a wall-like barrier at the edge of a roof, terrace, balcony or other structure. Where extending above a roof, it may simply be the portion of an exterior wall that continues above the line of the roof surface, or may be a continuation of a vertical feature beneath the roof such as a...
.

Though defenders on a high ground already have a direct line of sight, a glacis allows defenders to sweep the field more efficiently by minimizing changes to the angle of their guns while firing. Furthermore, the glacis prevents attacking cannons from having a clear shot at the walls of a fortress, as one usually cannot even see the walls until the glacis is crossed and the ditch, bounded on either side by the smooth, masoned scarp and counterscarp
Counterscarp
A scarp and a counterscarp are the inner and outer sides of a ditch used in fortifications. In permanent fortifications the scarp and counterscarp may be encased in stone...
, is reached.
More generally, the term glacis can denote any slope, natural or artificial, which fulfils the above requirements. The etymology of this French word suggests a slope made dangerous with ice, hence the relationship with glacier
Glacier
A glacier is a large persistent body of ice that forms where the accumulation of snow exceeds its ablation over many years, often centuries. At least 0.1 km² in area and 50 m thick, but often much larger, a glacier slowly deforms and flows due to stresses induced by its weight...
.

The term glacis plate describes the sloped front-most section of the hull of a tank
Tank
A tank is a tracked, armoured fighting vehicle designed for front-line combat which combines operational mobility, tactical offensive, and defensive capabilities...
or other armored fighting vehicle. In a head-on-head armored engagement, the glacis plate is the largest and most obvious target available to an enemy gunner. Anti-tank mine
Anti-tank mine
An anti-tank mine, , is a type of land mine designed to damage or destroy vehicles including tanks and armored fighting vehicles....
s which employ a tilt-rod
Tilt-rod fuze
A tilt-rod fuze is a device used to trigger anti-vehicle landmines. Typically it consists of a vertical pole, normally around a meter high, which is connected to the top of a landmine...
mechanism are also designed to detonate directly underneath the glacis plate. As a result, the glacis plate is generally the thickest, most robust armored section of a tank, followed by the turret face and mantlet
Gun mantlet
A gun mantlet is an armour plate or shield attached to an armoured fighting vehicle's gun, protecting the opening through which the weapon's barrel projects from the hull or turret armour and, in many cases, ensuring the vulnerable warhead of a loaded shell does not protrude past the vehicle's...
. 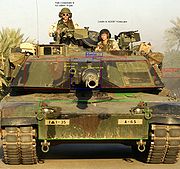 An erosional or depositional pediment, with little slope. Erosional glacis occur mostly in arid regions, and result from intense weathering and surface transport via laminar, episodic water flow.
The source of this article is wikipedia, the free encyclopedia.  The text of this article is licensed under the GFDL.