This was the first election conducted after the German Reunification
German reunification
German reunification was the process in 1990 in which the German Democratic Republic joined the Federal Republic of Germany , and when Berlin reunited into a single city, as provided by its then Grundgesetz constitution Article 23. The start of this process is commonly referred by Germans as die...
that had happened two months earlier, and a large number of seats were added to represent newly re-established eastern states of Germany without reducing the number of Western members. The euphoria following the reunification gave the ruling CDU/CSU–FDP coalition a dramatic advantage in both Western and Eastern Germany throughout the campaign.

All change figures are relative to the pre-existing West German Bundestag.


This was the one and only election for which the 5% threshold was not applied nation-wide, but separately for East and West. As a result The Greens (West) failed to gain representation while the East German Green Party did.

The governing CDU/CSU-FDP coalition was returned to office with landslide majority, and Helmut Kohl
Helmut Kohl
Helmut Josef Michael Kohl is a German conservative politician and statesman. He was Chancellor of Germany from 1982 to 1998 and the chairman of the Christian Democratic Union from 1973 to 1998...
remained chancellor. The CDU did exceptionally well in the former East Germany, which ironically had been the heartland of the SPD before the Nazi era. 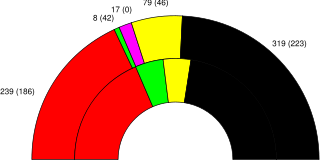