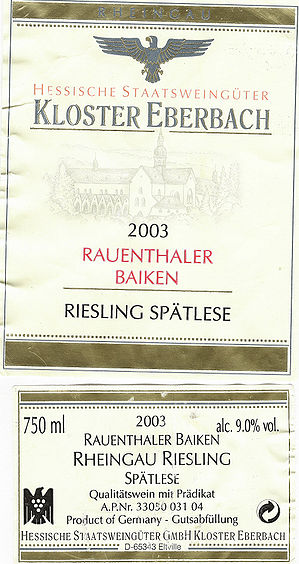 A German wine label can offer a wealth of information for the consumer, despite the reputation they traditionally have of confusing laymen. Jon Bonné, MSNBC
MSNBC
MSNBC is a cable news channel based in the United States available in the US, Germany , South Africa, the Middle East and Canada...
Life Style editor describes German wine
Wine
Wine is an alcoholic beverage, made of fermented fruit juice, usually from grapes. The natural chemical balance of grapes lets them ferment without the addition of sugars, acids, enzymes, or other nutrients. Grape wine is produced by fermenting crushed grapes using various types of yeast. Yeast...
labels as a "thicket of exotic words and abbreviations" that require "the vinous equivalent of Cliff notes
CliffsNotes
CliffsNotes are a series of student study guides available primarily in the United States. The guides present and explain literary and other works in pamphlet form or online. Detractors of the study guides claim they let students bypass reading the assigned literature...
to parse."

German wine
German wine
German wine is primarily produced in the west of Germany, along the river Rhine and its tributaries, with the oldest plantations going back to the Roman era. Approximately 60 percent of the German wine production is situated in the federal state of Rhineland-Palatinate, where 6 of the 13 regions ...
law regulates that at least six items of information be present on the label.

German wine domaines/"château
Château
A château is a manor house or residence of the lord of the manor or a country house of nobility or gentry, with or without fortifications, originally—and still most frequently—in French-speaking regions...
x" are often called "Kloster", "Schloss", "Burg", "Domaine" or "Weingut" followed by some other name.


The first number (1-9) relates to the German wine region where the wine was produced and tested (e.g. 3-Rheingau). The second 2 or 3 digit number indicates the village of the vineyard (e.g. 30-Rauenthal)). The next two digits represents the particular wine estate (e.g. 50-Kloster Eberbach). The following 2 to 3 digit number is the sequential order that the wine was submitted by that producer for testing (e.g. 031 - this was the 31st wine submitted by Kloster Eberbach for testing). The final two digits is the year of the testing, which is normally the year following the vintage
Vintage
Vintage, in wine-making, is the process of picking grapes and creating the finished product . A vintage wine is one made from grapes that were all, or primarily, grown and harvested in a single specified year. In certain wines, it can denote quality, as in Port wine, where Port houses make and...
(e.g. 04 - the wine was tested in 2004).