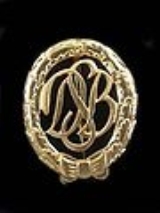 The German Sports Badge, also known as the "German National Sports Badge" was first created in the year 1912 and is one of the oldest awards of Germany still in active circulation. The Pour le Mérite
Pour le Mérite
The Pour le Mérite, known informally as the Blue Max , was the Kingdom of Prussia's highest military order for German soldiers until the end of World War I....
is another older award which is still issued in Germany, although the criteria for that decoration has changed since its original issuance as a military order.

Between 1914 and 1933, the German Sports Badge was issued for the completion of various physical tests
Physical fitness
Physical fitness comprises two related concepts: general fitness , and specific fitness...
by the young male population. As a military award, during the inter-war years of the 1920s and prior to 1933, the German National Sports Badge was one of the few military awards bestowed to the peacetime Reichswehr
Reichswehr
The Reichswehr formed the military organisation of Germany from 1919 until 1935, when it was renamed the Wehrmacht ....
.

The SS considered the German Sports Badge of particular importance and the decoration was one of nine awards which were listed on the front of all SS service record
Service record
A service record is a collection of either electronic or printed material which provides a documentary history of a person's activities and accomplishments while serving as a member of a given organization...
s with spaces for qualification dates. Regulations of the Allgemeine-SS required a prospective SS candidate
Anwärter
Anwärter is a German title which translates as “Candidate”. In modern day Germany, the title of Anwärter is typically used by those applying for employment and also as a designation for members of the Bundeswehr who are under consideration for a leadership assignment.During the Third Reich,...
to qualify for both the the German Sports Badge and the SA Sports Badge during a six month probationary period upon joining the SS. Notable SS recipients of the German Sports Badge include Reinhard Heydrich
Reinhard Heydrich
Reinhard Tristan Eugen Heydrich , also known as The Hangman, was a high-ranking German Nazi official.He was SS-Obergruppenführer and General der Polizei, chief of the Reich Main Security Office and Stellvertretender Reichsprotektor of Bohemia and Moravia...
, Joseph Mengele, and Amon Göth
Amon Göth
Amon Leopold Göth was an Austrian Nazi and the commandant of the Nazi concentration camp at Płaszów, General Government...
.

After World War II, the German Sports Badge was continued as a federal decoration in West Germany
West Germany
West Germany is the common English, but not official, name for the Federal Republic of Germany or FRG in the period between its creation in May 1949 to German reunification on 3 October 1990....
and continued in this status after German reunification
German reunification
German reunification was the process in 1990 in which the German Democratic Republic joined the Federal Republic of Germany , and when Berlin reunited into a single city, as provided by its then Grundgesetz constitution Article 23. The start of this process is commonly referred by Germans as die...
. Today, the German Sports Badge is a civilian decoration but it can be worn as an official award of the Bundeswehr
Bundeswehr
The Bundeswehr consists of the unified armed forces of Germany and their civil administration and procurement authorities...
, law enforcement and emergency services and certain allied nations.

To earn the award one must complete the following requirements (Requirements vary according to age category and gender):

The workgroup Projektgruppe Deutsches Sportabzeichen of the German Olympic Sports Association announced various changes for the German Sports Badge.
The following changes and various further changes are planned to be implemented by 2012:

Prospective judges have to fulfill certain requirements in order to obtain judging qualifications:

A license for a judge is valid for a period of four years.

The badge for a judge (Prüferabzeichen) is similar in shape as a regular sports badge, however, the color is green and it features a banner with the inscription Prüfer.

The Prüferabzeichen is no longer awarded, instead a t-shirt with the text "Sportsabzeichen team" is awarded.
Judges for the German Sports Badge may also judge the following badges:

The decoration has three grades: