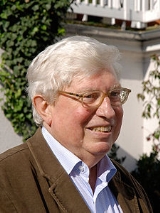 Encyclopedia
Gerhard Ertl is a German physicist
Physicist
A physicist is a scientist who studies or practices physics. Physicists study a wide range of physical phenomena in many branches of physics spanning all length scales: from sub-atomic particles of which all ordinary matter is made to the behavior of the material Universe as a whole...
and a Professor emeritus
Emeritus
Emeritus is a post-positive adjective that is used to designate a retired professor, bishop, or other professional or as a title. The female equivalent emerita is also sometimes used.-History:...
at the Department of Physical Chemistry, Fritz-Haber-Institut der Max-Planck-Gesellschaft
Fritz Haber Institute of the MPG
The Fritz Haber Institute of the Max Planck Society is a science research institute located at the heart of the academic district of Dahlem, in Berlin, Germany....
in Berlin
Berlin
Berlin is the capital city of Germany and is one of the 16 states of Germany. With a population of 3.45 million people, Berlin is Germany's largest city. It is the second most populous city proper and the seventh most populous urban area in the European Union...
, Germany
Germany
Germany , officially the Federal Republic of Germany , is a federal parliamentary republic in Europe. The country consists of 16 states while the capital and largest city is Berlin. Germany covers an area of 357,021 km2 and has a largely temperate seasonal climate...
. He won the 2007 Nobel Prize in Chemistry
Nobel Prize in Chemistry
The Nobel Prize in Chemistry is awarded annually by the Royal Swedish Academy of Sciences to scientists in the various fields of chemistry. It is one of the five Nobel Prizes established by the will of Alfred Nobel in 1895, awarded for outstanding contributions in chemistry, physics, literature,...
.

Gerhard Ertl is known for determining the detailed molecular mechanisms of the catalytic synthesis of ammonia
Ammonia
Ammonia is a compound of nitrogen and hydrogen with the formula . It is a colourless gas with a characteristic pungent odour. Ammonia contributes significantly to the nutritional needs of terrestrial organisms by serving as a precursor to food and fertilizers. Ammonia, either directly or...
over iron
Iron
Iron is a chemical element with the symbol Fe and atomic number 26. It is a metal in the first transition series. It is the most common element forming the planet Earth as a whole, forming much of Earth's outer and inner core. It is the fourth most common element in the Earth's crust...
(Haber Bosch process) and the catalytic oxidation of carbon monoxide
Carbon monoxide
Carbon monoxide , also called carbonous oxide, is a colorless, odorless, and tasteless gas that is slightly lighter than air. It is highly toxic to humans and animals in higher quantities, although it is also produced in normal animal metabolism in low quantities, and is thought to have some normal...
over platinum
Platinum
Platinum is a chemical element with the chemical symbol Pt and an atomic number of 78. Its name is derived from the Spanish term platina del Pinto, which is literally translated into "little silver of the Pinto River." It is a dense, malleable, ductile, precious, gray-white transition metal...
(catalytic converter
Catalytic converter
A catalytic converter is a device used to convert toxic exhaust emissions from an internal combustion engine into non-toxic substances. Inside a catalytic converter, a catalyst stimulates a chemical reaction in which noxious byproducts of combustion are converted to less toxic substances by dint...
). During his research he discovered the important phenomenon of oscillatory reactions on platinum surfaces and, using photoelectron microscopy, was able to image for the first time, the oscillating changes in surface structure and coverage that occur during reaction.

He always used new observation techniques like low-energy electron diffraction (LEED) at the beginning of his career, later ultraviolet photoelectron spectroscopy
Ultraviolet photoelectron spectroscopy
Ultraviolet photoelectron spectroscopy refers to the measurement of kinetic energy spectra of photoelectrons emitted by molecules which have absorbed ultraviolet photons, in order to determine molecular energy levels in the valence region.-Basic Theory:...
(UPS) and scanning tunneling microscope
Scanning tunneling microscope
A scanning tunneling microscope is an instrument for imaging surfaces at the atomic level. Its development in 1981 earned its inventors, Gerd Binnig and Heinrich Rohrer , the Nobel Prize in Physics in 1986. For an STM, good resolution is considered to be 0.1 nm lateral resolution and...
(STM) yielding ground breaking results.
He won the Wolf Prize in Chemistry
Wolf Prize in Chemistry
The Wolf Prize in Chemistry is awarded once a year by the Wolf Foundation in Israel. It is one of the six Wolf Prizes established by the Foundation and awarded since 1978; the others are in Agriculture, Mathematics, Medicine, Physics and Arts.-Laureates:...
in 1998 along with Gabor A. Somorjai
Gabor A. Somorjai
Gabor A. Somorjai is currently a professor at the University of California, Berkeley and is a leading researcher in the field of surface chemistry and catalysis...
of the University of California, Berkeley for "their outstanding contributions to the field of the surface science
Surface science
Surface science is the study of physical and chemical phenomena that occur at the interface of two phases, including solid–liquid interfaces, solid–gas interfaces, solid–vacuum interfaces, and liquid-gas interfaces. It includes the fields of surface chemistry and surface physics. Some related...
in general and for their elucidation of fundamental mechanisms of heterogeneous catalytic reactions at single crystal surface in particular."

Gerhard Ertl was awarded the 2007 Nobel Prize in Chemistry
Nobel Prize in Chemistry
The Nobel Prize in Chemistry is awarded annually by the Royal Swedish Academy of Sciences to scientists in the various fields of chemistry. It is one of the five Nobel Prizes established by the will of Alfred Nobel in 1895, awarded for outstanding contributions in chemistry, physics, literature,...
for his studies of chemical processes on solid surfaces. The award, worth SEK
Swedish krona
The krona has been the currency of Sweden since 1873. Both the ISO code "SEK" and currency sign "kr" are in common use; the former precedes or follows the value, the latter usually follows it, but especially in the past, it sometimes preceded the value...
10 million (US$
United States dollar
The United States dollar , also referred to as the American dollar, is the official currency of the United States of America. It is divided into 100 smaller units called cents or pennies....
1.7 million, GB£
Pound sterling
The pound sterling , commonly called the pound, is the official currency of the United Kingdom, its Crown Dependencies and the British Overseas Territories of South Georgia and the South Sandwich Islands, British Antarctic Territory and Tristan da Cunha. It is subdivided into 100 pence...
1.15 million), was announced on Ertl's 71st birthday. "I am speechless", Ertl told Associated Press from his office in Berlin. "I was not counting on this."

Ertl and his wife Barbara have two children and several grandchildren. His hobbies include playing the piano and also playing with his cats when he is not doing experiments. He is a Christian.