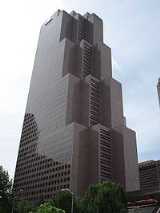 Encyclopedia
Georgia-Pacific LLC is an American pulp and paper
Pulp and Paper
Pulp and Paper is the name of the largest United States-based trade magazine for the pulp and paper industry. See also: Paper engineering, Pulp and Paper Merit Badge...
company based in Atlanta, Georgia
Atlanta, Georgia
Atlanta is the capital and most populous city in the U.S. state of Georgia. According to the 2010 census, Atlanta's population is 420,003. Atlanta is the cultural and economic center of the Atlanta metropolitan area, which is home to 5,268,860 people and is the ninth largest metropolitan area in...
, and is one of the world's leading manufacturers and distributors of tissue
Tissue paper
Tissue paper is a lightweight paper or, light crêpe paper. Tissue can be made both from virgin and recycled paper pulp.-Properties:Key properties are: strength, absorbency, basis weight, thickness , brightness, stretch, appearance and comfort....
, pulp
Wood pulp
Pulp is a lignocellulosic fibrous material prepared by chemically or mechanically separating cellulose fibres from wood, fibre crops or waste paper. Wood pulp is the most common raw material in papermaking.-History:...
, paper
Paper
Paper is a thin material mainly used for writing upon, printing upon, drawing or for packaging. It is produced by pressing together moist fibers, typically cellulose pulp derived from wood, rags or grasses, and drying them into flexible sheets....
, packaging, building products and related chemicals
Paper chemicals
-Optical brightening agent:Optical brightener is used to make paper appear more white. Optical brightening agents use fluorescence to absorb invisible radiation from the ultraviolet part of the light spectrum and re-emit the radiation as light in the visible blue range. The optical brightening...
. As of Fall 2010, the company employed more than 40,000 people at more than 300 locations in North America, South America and Europe. It is an independently operated and managed company of Koch Industries
Koch Industries
Koch Industries, Inc. , is an American private energy conglomerate based in Wichita, Kansas, with subsidiaries involved in manufacturing, trading and investments. Koch also owns Invista, Georgia-Pacific, Flint Hills Resources, Koch Pipeline, Koch Fertilizer, Koch Minerals and Matador Cattle Company...
.

Georgia-Pacific was founded by Owen Robertson Cheatham in 1927 in Augusta, Georgia
Augusta, Georgia
Augusta is a consolidated city in the U.S. state of Georgia, located along the Savannah River. As of the 2010 census, the Augusta–Richmond County population was 195,844 not counting the unconsolidated cities of Hephzibah and Blythe.Augusta is the principal city of the Augusta-Richmond County...
as the Georgia Hardwood Lumber Co. Over the years it expanded, adding sawmill
Sawmill
A sawmill is a facility where logs are cut into boards.-Sawmill process:A sawmill's basic operation is much like those of hundreds of years ago; a log enters on one end and dimensional lumber exits on the other end....
s and plywood
Plywood
Plywood is a type of manufactured timber made from thin sheets of wood veneer. It is one of the most widely used wood products. It is flexible, inexpensive, workable, re-usable, and can usually be locally manufactured...
lumber mills. The company acquired its first west coast facility in 1947 and changed its name to Georgia-Pacific Plywood & Lumber Co. in 1948. In 1956, the company changed its name to Georgia-Pacific Corp. In 1957 the company entered the pulp and paper business by building a kraft pulp and linerboard mill at Toledo, Oregon
Toledo, Oregon
Toledo is a city located on the Yaquina River and along U.S. Route 20 in Lincoln County, Oregon, United States. As of the 2000 census, the city had a total population of 3,472...
. The company continued to make a series of acquisitions, including US Plywood in 1987, Great Northern Nekoosa in 1990 and the Fort James Corporation in 2000. The Fort James Corporation itself was made up of a series of mergers that included the Fort Howard Corporation, the James River Corporation and Crown-Zellerbach. In August 2001, Georgia-Pacific completed the sale of four uncoated paper mills and their associated businesses and assets to Canadian papermaker Domtar
Domtar
Domtar Corporation is the largest integrated producer of uncoated freesheet paper in North America and the second largest in the world based on production capacity, and is also a manufacturer of papergrade pulp....
for .

The Georgia-Pacific Center in Atlanta continues to house the company's headquarters.

On January 11, 2010, Georgia-Pacific signed an agreement to acquire Grant Forest Products' oriented strand board
Oriented strand board
Oriented strand board, also known as OSB and SmartPly , is an engineered wood product formed by layering strands of wood in specific orientations. In appearance, it may have a rough and variegated surface with the individual strips Oriented strand board, also known as OSB (UK) and SmartPly (UK &...
("OSB") facility at Englehart, Ontario
Englehart, Ontario
Englehart is a town in the Canadian province of Ontario, located on the Englehart River in the Timiskaming District.-History:...
and the associated facility at Earlton, Ontario, as well as its OSB facilities at Clarendon and Allendale, South Carolina
Allendale, South Carolina
Allendale is a town in Allendale County, South Carolina, United States. The population was 4,052 at the 2000 census. It is the county seat of Allendale County.-Geography:...
, for approximately $400 million. The transaction is expected to close in the first half of 2010, following appropriate US and Canadian regulatory review and court approval.

Georgia-Pacific publicly reports on its environmental performance through its Environmental and Social Responsibility report which is available on its web site. Based on year 2000 data, researchers at the Political Economy Research Institute of the University of Massachusetts
University of Massachusetts
This article relates to the statewide university system. For the flagship campus often referred to as "UMass", see University of Massachusetts Amherst...
named Georgia-Pacific as the fifteenth-largest corporate producer of air pollution
Air pollution
Air pollution is the introduction of chemicals, particulate matter, or biological materials that cause harm or discomfort to humans or other living organisms, or cause damage to the natural environment or built environment, into the atmosphere....
in the United States
United States
The United States of America is a federal constitutional republic comprising fifty states and a federal district...
. In that year, Georgia-Pacific facilities released more than 22,000,000 pounds of toxic chemicals into the air.

In 1995, the company drew criticism for allegedly pressuring the U.S. Senate Judiciary Committee to approve legislation that would allow Georgia-Pacific to "avoid installing pollution gear at many of its plants." In 1996, Georgia-Pacific agreed to pay for at least US$26,000,000 in environmental measures and $6,000,000 in fines to settle allegations that particle emissions from its facilities endangered people and crops in the southeastern United States.

Georgia-Pacific is also involved in several remediation sites, many of which were landfills used by other manufacturers, municipalities and other businesses, and individuals. Two of the primary remediation sites - the Fox River
Fox River (Wisconsin)
The Fox River is a river in eastern and central Wisconsin in the United States. Along the banks is a chain of cities, including Oshkosh, Neenah, Menasha, Appleton, Little Chute, Kimberly, Combined Locks, and Kaukauna. Except for Oshkosh, these cities refer to themselves as the Fox Cities...
in Wisconsin and Kalamazoo River
Kalamazoo River
The Kalamazoo River is a river in the U.S. state of Michigan. The river is long from the junction of its North and South branches to its mouth at Lake Michigan, with a total length extending to when one includes the South Branch...
in Michigan - involve the cleanup of PCBs
Polychlorinated biphenyl
Polychlorinated biphenyls are a class of organic compounds with 2 to 10 chlorine atoms attached to biphenyl, which is a molecule composed of two benzene rings. The chemical formula for PCBs is C12H10-xClx...
.

Many years ago, GP predecessor companies and others recycled wastepaper, including carbonless paper, into other paper products. At the time, carbonless paper was made with a chemical containing PCBs. The PCBs were washed from the paper and discharged in the mills' wastewater to the rivers.

In 2007, the EPA announced legal agreements among itself, Michigan
Michigan
Michigan is a U.S. state located in the Great Lakes Region of the United States of America. The name Michigan is the French form of the Ojibwa word mishigamaa, meaning "large water" or "large lake"....
, Georgia-Pacific, and Millennium Holdings (a corporate successor of the Allied Paper Corporation
Allied Paper Corporation
-Allied Paper Mills:Allied Paper Mills was incorporated in Kalamazoo, Michigan, USA during 1921 when three local paper companies merged. These were the Monarch Paper Company in Kalamazoo, the King Paper Company in Kalamazoo and the Bardeen Paper Company in Otsego...
) requiring the companies to clean up an estimated $21,000,000 worth of environmental damage to the Plainwell Impoundment Area. Another settlement required an additional $15,000,000 of environmental work on the Kalamazoo River Superfund Site
Kalamazoo Superfund Site
In 1990, the Allied Paper, Inc./Portage Creek/Kalamazoo River was declared a Superfund site by the Environmental Protection Agency . Kalamazoo is located on the southwestern side of Michigan. A three mile section of Portage Creek flows into the Kalamazoo River which is also contaminated. The...
.

Georgia-Pacific is the world's largest recycler of recovered wastepaper.

In 2009, the EPA awarded Koch subsidiary Georgia-Pacific
Georgia-Pacific
Georgia-Pacific LLC is an American pulp and paper company based in Atlanta, Georgia, and is one of the world's leading manufacturers and distributors of tissue, pulp, paper, packaging, building products and related chemicals. As of Fall 2010, the company employed more than 40,000 people at more...
its SmartWay Excellence award, "an innovative collaboration between the U.S. Environmental Protection Agency (EPA) and the freight industry designed to increase energy efficiency while significantly reducing air pollution," and specifically commended Georgia-Pacific. The award states:

In, 2008, 93% of Georgia-Pacific's freight was hauled by SmartWay Transport Partners, an increase of 47% over the previous year. Of the 145 carriers Georgia-Pacific uses, 104 were SmartWay carriers, an increase of 33% over 2007. In 2008, Georgia-Pacific experienced tremendous growth in its intermodal shipping. Georgia-Pacific was able to work with its customers to increase lead-time and create more intermodal freight shipments without significantly impacting customer's needs, thus increasing intermodal loads by 39% in 2008 as compared to 2007. Georgia-Pacific uses advanced software to pack loads more efficiently and increase cube utilization in its trailers. The company also reduced empty loads by 10%, increased utilization of local fleets, and established an idling reduction policy in place at its 12 distribution centers. And, in summer of 2008, Georgia Pacific held a fuel conservation summit to explore ways that shippers and carriers could work together to further reduce fuel consumption from its freight transport operations.