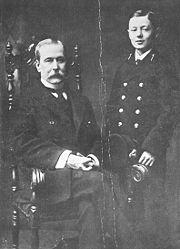 George Archer-Shee became a British
United Kingdom
The United Kingdom of Great Britain and Northern IrelandIn the United Kingdom and Dependencies, other languages have been officially recognised as legitimate autochthonous languages under the European Charter for Regional or Minority Languages...
cause célèbre
Cause célèbre
A is an issue or incident arousing widespread controversy, outside campaigning and heated public debate. The term is particularly used in connection with celebrated legal cases. It is a French phrase in common English use...
in 1910 when the issue of whether he stole a five shilling postal order
Postal Order
In the United Kingdom , a Postal Order is used for sending money through the mail. In the United States, this is known as a Postal money order...
ended up being decided in the High Court
High Court of Justice
The High Court of Justice is, together with the Court of Appeal and the Crown Court, one of the Senior Courts of England and Wales...
.

Archer-Shee had become a cadet at Osborne Naval College in January 1908. The College, in the grounds of Queen Victoria's favourite home on the Isle of Wight, educated and trained Royal naval cadets for their first two years, from 14 to 16.
On 7 October, shortly after the start of the autumn term, a fellow cadet, Terence Back, received a postal order from a relative for five shillings. That afternoon, Archer-Shee received permission to go to the Post Office outside the grounds of the school to buy a postal order and a stamp, as he wished to buy a model train costing fifteen shillings and sixpence. When he got back to the college, the theft of Back's postal order had been reported and the clerk-in-charge of the Post Office, Miss Tucker, was sent for. She produced the cashed postal order for Back, and stated that only two cadets had visited that afternoon: the same cadet who had bought a postal order for 15s 6d had also cashed the 5s order.


Defence of his honour

When the Admiralty wrote to Archer-Shee's father Martin (an official of the Bank of England) telling him that his son was being expelled, he instantly responded that "Nothing will make me believe the boy guilty of this charge, which shall be sifted by independent experts". The family were devout Roman Catholics
Roman Catholic Church
The Catholic Church, also known as the Roman Catholic Church, is the world's largest Christian church, with over a billion members. Led by the Pope, it defines its mission as spreading the gospel of Jesus Christ, administering the sacraments and exercising charity...
and the background in bank management meant that the sons had all been brought up to regard misuse of money as a particularly heinous thing. Martin Archer-Shee engaged lawyers and, through the connections of George's half-brother Major Martin Archer-Shee
Martin Archer-Shee
Lt. Col Sir Martin Archer-Shee was a British army officer and Conservative Party politician.He was the son of Martin Archer-Shee and his wife Elizabeth née Pell of New York...
, who was active in politics, (in 1910 he became a Member of Parliament) obtained the services of Sir Edward Carson as the family's barrister: Carson was regarded as one of the best barristers in practice at the time, and had a son who had been to Osborne. Before he took the case, Carson subjected the boy to questioning to test his story, and satisfied himself of the boy's innocence. However, becoming a cadet excluded Archer-Shee from civil trial, and he had not reached the status for court-martial
Court-martial
A court-martial is a military court. A court-martial is empowered to determine the guilt of members of the armed forces subject to military law, and, if the defendant is found guilty, to decide upon punishment.Most militaries maintain a court-martial system to try cases in which a breach of...
, so Carson resorted to an archaic legal device called a petition of right
Petition of right
In English law, a petition of right was a remedy available to subjects to recover property from the Crown.Before the Crown Proceedings Act 1947, the British Crown could not be sued in contract...
against the Crown to bring the matter before the courts. 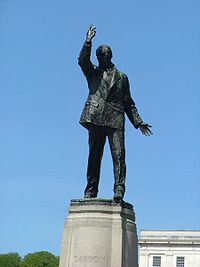 It took many months to bring the case to trial, but it was heard from 26 July 1910. Carson's opening remarks resonated through the following century:

A boy 13 years old has been labelled and ticketed for all his future life as a thief and a forger. Gentlemen, I protest against the injustice to a child, without communication with his parents, without his case ever being put, or an opportunity of its ever being put forward by those on his behalf. That little boy from the day that he was first charged, up to this moment, whether in the ordeal of being called in before his Commander and his Captain, or whether under the softer influences of the persuasion of his own loving parents, has never faltered in the statement that he is innocent.

The extent to which the Admiralty's charges would fail became obvious when Carson had successfully shown that the elderly postmistress, Miss Tucker, could easily have been mistaken. She admitted that to her, all of the cadets looked alike, and that, in the course of dealing with one cadet and the various tasks of her duties, another could have stepped into his place without her noticing. This was reinforced by the fact that, when given the opportunity to point out Archer-Shee from among other cadets, she was unable to do so.

On the fourth day, 29 July, the Solicitor-General
Solicitor General for England and Wales
Her Majesty's Solicitor General for England and Wales, often known as the Solicitor General, is one of the Law Officers of the Crown, and the deputy of the Attorney General, whose duty is to advise the Crown and Cabinet on the law...
, Sir Rufus Isaacs
Rufus Isaacs, 1st Marquess of Reading
Rufus Isaacs, 1st Marquess of Reading, GCB, GCSI, GCIE, GCVO, PC, KC , was an English lawyer, jurist and politician...
, accepted the statement that George Archer-Shee did not cash the postal order "and consequently that he is innocent of the charge. I say further, in order that there may be no misapprehension about it, that I make that statement without any reserve of any description, intending that it shall be a complete justification of the statement of the boy and the evidence he has given before the court."

The family then began to press the Admiralty to pay restitution. The First Lord of the Admiralty said on 16 March 1911 that he thought the House of Commons would think it inappropriate. The family then circulated a booklet presenting their side of the case. On 6 April, the Naval Estimates came up for debate. However, as many Members of Parliament raised the Archer-Shee case – both for and against (most supported compensation) – the Admiralty were forced to concede a judicial hearing to decide the matter, lest the business be 'lost' (a Parliamentary term meaning postponed to a future day). Viscount Mersey reported that the family should be paid £4,120 to cover their costs, and £3,000 compensation "in full settlement of all demands", and the money was paid that July.

After his expulsion from Osborne, Archer-Shee returned to Stonyhurst College
Stonyhurst College
Stonyhurst College is a Roman Catholic independent school, adhering to the Jesuit tradition. It is located on the Stonyhurst Estate near the village of Hurst Green in the Ribble Valley area of Lancashire, England, and occupies a Grade I listed building...
(where he had been educated before going to Osborne). He went to the United States
United States
The United States of America is a federal constitutional republic comprising fifty states and a federal district...
to work in the Wall Street firm of Fisk & Robinson, but returned home to enlist in the British Army
British Army
The British Army is the land warfare branch of Her Majesty's Armed Forces in the United Kingdom. It came into being with the unification of the Kingdom of England and Scotland into the Kingdom of Great Britain in 1707. The new British Army incorporated Regiments that had already existed in England...
at the start of World War I
World War I
World War I , which was predominantly called the World War or the Great War from its occurrence until 1939, and the First World War or World War I thereafter, was a major war centred in Europe that began on 28 July 1914 and lasted until 11 November 1918...
. He was commissioned as a Lieutenant in the First Battalion, the South Staffordshire Regiment
South Staffordshire Regiment
The South Staffordshire Regiment was an infantry regiment of the British Army formed in 1881 by the amalgamation of the 38th Regiment of Foot and the 80th Regiment of Foot. In 1959 the regiment was amlagamated with the North Staffordshire Regiment to form the Staffordshire Regiment...
, and was killed, aged 19, at the First Battle of Ypres
First Battle of Ypres
The First Battle of Ypres, also called the First Battle of Flanders , was a First World War battle fought for the strategic town of Ypres in western Belgium...
in 1914. His name is inscribed on the war memorial in the village of North Woodchester in Gloucestershire where his parents lived. It is said in the Carson family that he joined the South Staffs at the suggestion of Sir Edward Carson, whose nephew, FE Robinson, had recently joined that regiment. Their names are close together on tablet 35 of the Menin Gate
Menin Gate
The Menin Gate Memorial to the Missing is a war memorial in Ypres, Belgium dedicated to the commemoration of British and Commonwealth soldiers who were killed in the Ypres Salient of the First World War and whose graves are unknown...
(neither having any known grave) in Ypres, Teddy Robinson having been killed 3 days before Archer-Shee.

Cadet Terence Back remained in the Royal Navy and was promoted to be a Captain from 1939. He served on the Arctic Convoys during the Second World War.

The case was the inspiration for the play The Winslow Boy
The Winslow Boy
thumb|1st edition cover The Winslow Boy is an English play from 1946 by Terence Rattigan based on an actual incident in the Edwardian era, which took place at the Royal Naval College, Osborne.-Performance History:...
by Terence Rattigan
Terence Rattigan
Sir Terence Mervyn Rattigan CBE was one of England's most popular 20th-century dramatists. His plays are generally set in an upper-middle-class background...
. Although the legal details of the case follow very closely the real story, the family relations are almost entirely fictionalised.