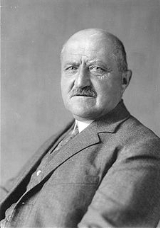 Encyclopedia
Georg Michaelis became the first Chancellor of Germany with a non-noble background.

Michaelis, born in Haynau
Chojnów
Chojnów is a small town in Legnica County, Lower Silesian Voivodeship, in south-western Poland. It is located on the Skora river, a tributary of the Kaczawa at an average altitude of above sea level. Chojnów is the administrative seat of the rural gmina called Gmina Chojnów, although the town is...
in the Prussia
Prussia
Prussia was a German kingdom and historic state originating out of the Duchy of Prussia and the Margraviate of Brandenburg. For centuries, the House of Hohenzollern ruled Prussia, successfully expanding its size by way of an unusually well-organized and effective army. Prussia shaped the history...
n Province of Silesia
Province of Silesia
The Province of Silesia was a province of the Kingdom of Prussia from 1815 to 1919.-Geography:The territory comprised the bulk of the former Bohemian crown land of Silesia and the County of Kladsko, which King Frederick the Great had conquered from the Austrian Habsburg Monarchy in the 18th...
, grew up in Frankfurt (Oder)
Frankfurt (Oder)
Frankfurt is a town in Brandenburg, Germany, located on the Oder River, on the German-Polish border directly opposite the town of Słubice which was a part of Frankfurt until 1945. At the end of the 1980s it reached a population peak with more than 87,000 inhabitants...
. He studied jurisprudence
Jurisprudence
Jurisprudence is the theory and philosophy of law. Scholars of jurisprudence, or legal theorists , hope to obtain a deeper understanding of the nature of law, of legal reasoning, legal systems and of legal institutions...
at the University of Breslau, the University of Leipzig
University of Leipzig
The University of Leipzig , located in Leipzig in the Free State of Saxony, Germany, is one of the oldest universities in the world and the second-oldest university in Germany...
and the University of Würzburg
University of Würzburg
The University of Würzburg is a university in Würzburg, Germany, founded in 1402. The university is a member of the distinguished Coimbra Group.-Name:...
from 1876 to 1884, becoming a Doctor of Laws
Juris Doctor
Juris Doctor is a professional doctorate and first professional graduate degree in law.The degree was first awarded by Harvard University in the United States in the late 19th century and was created as a modern version of the old European doctor of law degree Juris Doctor (see etymology and...
.

From 1885 to 1889 he lived and worked in Tokyo
Tokyo
, ; officially , is one of the 47 prefectures of Japan. Tokyo is the capital of Japan, the center of the Greater Tokyo Area, and the largest metropolitan area of Japan. It is the seat of the Japanese government and the Imperial Palace, and the home of the Japanese Imperial Family...
in Japan
Japan
Japan is an island nation in East Asia. Located in the Pacific Ocean, it lies to the east of the Sea of Japan, China, North Korea, South Korea and Russia, stretching from the Sea of Okhotsk in the north to the East China Sea and Taiwan in the south...
as a law professor of the Law School of the Society for German Sciences
Dokkyo University
is a private university in Sōka, Saitama, Japan, which is a fairly liberal, mixed institution noted for its language education programmes and international exchanges.- History :...
.

After his return to Germany he became a member of the Prussia
Prussia
Prussia was a German kingdom and historic state originating out of the Duchy of Prussia and the Margraviate of Brandenburg. For centuries, the House of Hohenzollern ruled Prussia, successfully expanding its size by way of an unusually well-organized and effective army. Prussia shaped the history...
n administration. In 1909 he won appointment as undersecretary of state to the Prussian Treasury in Berlin
Berlin
Berlin is the capital city of Germany and is one of the 16 states of Germany. With a population of 3.45 million people, Berlin is Germany's largest city. It is the second most populous city proper and the seventh most populous urban area in the European Union...
. From 1915 onwards he headed the Reichsgetreidestelle, an office responsible for the administration of Prussian corn and wheat in World War I
World War I
World War I , which was predominantly called the World War or the Great War from its occurrence until 1939, and the First World War or World War I thereafter, was a major war centred in Europe that began on 28 July 1914 and lasted until 11 November 1918...
.

After the Reichstag and the High Command
High command
The phrase High command may refer to:* Command * Chain of command* Commander-in-Chief* Defence minister* Oberkommando der Wehrmacht, the WWII command structure popularly known as "German High Command"Compare:* Staff...
forced the resignation of Theobald von Bethmann Hollweg  on July 14, 1917, Michaelis became Chancellor of Germany as well as Minister President of Prussia
Prime Minister of Prussia
The office of Minister President or Prime Minister of Prussia existed in one form or another from 1702 until the dissolution of Prussia in 1947. When Prussia was an independent kingdom the Minister President or Prime Minister functioned as the King's Chief Minister and presided over the Prussian...
. He remained in this position until October 31, 1917, when he was forced to resign after coming under fire for refusing to commit himself by endorsing a resolution passed by the Reichstag
Reichstag (German Empire)
The Reichstag was the parliament of the North German Confederation , and of the German Reich ....
favoring peace without annexation or indemnities. In addition, he was increasingly seen as a puppet of Paul von Hindenburg
Paul von Hindenburg
Paul Ludwig Hans Anton von Beneckendorff und von Hindenburg , known universally as Paul von Hindenburg was a Prussian-German field marshal, statesman, and politician, and served as the second President of Germany from 1925 to 1934....
and Erich Ludendorff
Erich Ludendorff
Erich Friedrich Wilhelm Ludendorff was a German general, victor of Liège and of the Battle of Tannenberg...
of the General Staff
General Staff
A military staff, often referred to as General Staff, Army Staff, Navy Staff or Air Staff within the individual services, is a group of officers and enlisted personnel that provides a bi-directional flow of information between a commanding officer and subordinate military units...
.

Michaelis attempted to retain his role as Prussian Minister President, without success. From April 1, 1918 to March 31, 1919, he served as Oberpräsident of the Prussian province of Pomerania
Pomerania
Pomerania is a historical region on the south shore of the Baltic Sea. Divided between Germany and Poland, it stretches roughly from the Recknitz River near Stralsund in the West, via the Oder River delta near Szczecin, to the mouth of the Vistula River near Gdańsk in the East...
. After the end of World War I, he cooperated with the local workers' and soldiers' council
Workers' council
A workers' council, or revolutionary councils, is the phenomenon where a single place of work or enterprise, such as a factory, school, or farm, is controlled collectively by the workers of that workplace, through the core principle of temporary and instantly revocable delegates.In a system with...
. Nevertheless, the Socialist-dominated government of Prussia soon replaced him.

After his dismissal, Michaelis worked in the fields of economic lobbying, in student organizations, in the synod
Synod
A synod historically is a council of a church, usually convened to decide an issue of doctrine, administration or application. In modern usage, the word often refers to the governing body of a particular church, whether its members are meeting or not...
of the Evangelical Church of the old-Prussian Union and became a member of the monarchist German National People's Party
German National People's Party
The German National People's Party was a national conservative party in Germany during the time of the Weimar Republic. Before the rise of the NSDAP it was the main nationalist party in Weimar Germany composed of nationalists, reactionary monarchists, völkisch, and antisemitic elements, and...
(DNVP). In 1921, he published his memoirs, Für Staat und Volk. Eine Lebensgeschichte.

Georg Michaelis died on July 24, 1936 in Bad Saarow-Pieskow (Brandenburg
Brandenburg
Brandenburg is one of the sixteen federal-states of Germany. It lies in the east of the country and is one of the new federal states that were re-created in 1990 upon the reunification of the former West Germany and East Germany. The capital is Potsdam...
) at the age of 78.
The source of this article is wikipedia, the free encyclopedia.  The text of this article is licensed under the GFDL.