Encyclopedia
A general-purpose machine gun (GPMG) is a multi-purpose weapon: it is a machine gun
Machine gun
A machine gun is a fully automatic mounted or portable firearm, usually designed to fire rounds in quick succession from an ammunition belt or large-capacity magazine, typically at a rate of several hundred rounds per minute....
firing a full-power rifle cartridge and which can be used in a variety of roles, from a bipod- or tripod-mounted infantry support weapon to a helicopter door gun or a vehicle-mounted support weapon. Its purpose is to provide fire support for vehicles or infantry from a variety of mounts.

In modern practice, they are air-cooled medium machine guns firing rifle cartridges such as the 7.62×51mm NATO
7.62×51mm NATO
The 7.62×51mm NATO is a rifle cartridge developed in the 1950s as a standard for small arms among NATO countries...
, 7.62×54mmR Russian, or 7.92x57mm Mauser. They are generally operated from a stationary prone position from either a bipod
Bipod
A bipod is a support device that is similar to a tripod or monopod, but with two legs. It provides significant stability along two axes of motion .-Firearms:...
or tripod
Tripod
A tripod is a portable three-legged frame, used as a platform for supporting the weight and maintaining the stability of some other object. The word comes from the Greek tripous, meaning "three feet". A tripod provides stability against downward forces, horizontal forces and moments about the...
, or otherwise mounted on a vehicle, as they are usually too powerful and heavy to be fired effectively on foot from an unsupported standing position or on the move. 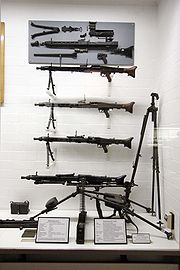