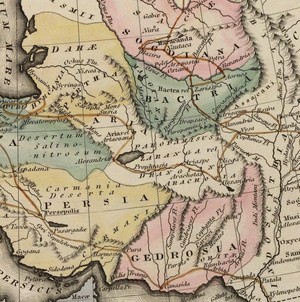 In 325 BC, Alexander the Great crossed the area on his way back to Babylon
Babylon
Babylon was an Akkadian city-state of ancient Mesopotamia, the remains of which are found in present-day Al Hillah, Babil Province, Iraq, about 85 kilometers south of Baghdad...
after campaigning in the east. Historians say he lost three-quarters of his army to the harsh desert conditions along the way. John Prevas
John Prevas
John Prevas is scholar in residence at Eckerd College. He is the author of Hannibal Crosses The Alps , Xenophon's March: Into the Lair of the Persian Lion and Envy of the Gods , a history of Alexander the Great's ill-fated journey through the Gedrosian Desert in Pakistan...
, in his book "Envy of the Gods: Alexander the Great's Ill-Fated Journey Across Asia", says that Alexander wanted to punish his army for retreating from risking a military campaign against the powerful kingdoms in India proper.
The source of this article is wikipedia, the free encyclopedia.  The text of this article is licensed under the GFDL.