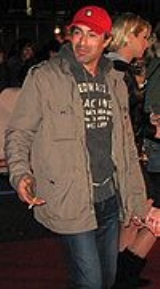 Encyclopedia
Gedeon Burkhard is a German film and television actor. Although he has appeared in numerous films and TV series in both Europe and the US, he is probably best recognised for his role as Alexander Brandtner in the Austrian/German television series Kommissar Rex
Kommissar Rex
Kommissar Rex is a popular Austrian-made police television drama, aired from 1994 to 2004. In 2007 a new series was released , under Austrian-Italian production. From February 18, 2008, the 12th season was shot in Rome...
(1998–2001), which has been aired on television in numerous countries around the world, or as Corporal Wilhelm Wicki in the 2009 film Inglorious Basterds,

Gedeon Burkhard was born in Munich
Munich
Munich The city's motto is "" . Before 2006, it was "Weltstadt mit Herz" . Its native name, , is derived from the Old High German Munichen, meaning "by the monks' place". The city's name derives from the monks of the Benedictine order who founded the city; hence the monk depicted on the city's coat...
, Germany
Germany
Germany , officially the Federal Republic of Germany , is a federal parliamentary republic in Europe. The country consists of 16 states while the capital and largest city is Berlin. Germany covers an area of 357,021 km2 and has a largely temperate seasonal climate...
, the son of German actress Elisabeth von Molo and a great-grandson of Alexander Moissi, a famous Italo
Italian people
The Italian people are an ethnic group that share a common Italian culture, ancestry and speak the Italian language as a mother tongue. Within Italy, Italians are defined by citizenship, regardless of ancestry or country of residence , and are distinguished from people...
-Austro
Austrians
Austrians are a nation and ethnic group, consisting of the population of the Republic of Austria and its historical predecessor states who share a common Austrian culture and Austrian descent....
-Albanian
Albanians
Albanians are a nation and ethnic group native to Albania and neighbouring countries. They speak the Albanian language. More than half of all Albanians live in Albania and Kosovo...
actor of the 20th century. Gedeon was educated at a boarding school in England. He began his acting career in 1979 in the German TV film Tante Maria. His father, Wolfgang Burkhard, is his manager.

During the 1990s, he lived in the U.S.
United States
The United States of America is a federal constitutional republic comprising fifty states and a federal district...
, working in several productions but without much recognition. In this period, Gedeon Burkhard got married in Las Vegas
Las Vegas metropolitan area
The Las Vegas Valley is the heart of the Las Vegas-Paradise, NV MSA also known as the Las Vegas–Paradise–Henderson MSA which includes all of Clark County, Nevada, and is a metropolitan area in the southern part of the U.S. state of Nevada. The Valley is defined by the Las Vegas Valley landform, a ...
only to divorce 4 months later. After that, he lived in Vienna for Kommisar Rex for more than 5 years, before moving to Berlin
Berlin
Berlin is the capital city of Germany and is one of the 16 states of Germany. With a population of 3.45 million people, Berlin is Germany's largest city. It is the second most populous city proper and the seventh most populous urban area in the European Union...
for work reasons. Gedeon Burkhard was working in Cologne
Cologne
Cologne is Germany's fourth-largest city , and is the largest city both in the Germany Federal State of North Rhine-Westphalia and within the Rhine-Ruhr Metropolitan Area, one of the major European metropolitan areas with more than ten million inhabitants.Cologne is located on both sides of the...
on the TV series Alarm für Cobra 11
Alarm für Cobra 11 – Die Autobahnpolizei
Alarm für Cobra 11 – Die Autobahnpolizei is a long-running, popular German television series about a two-man team of highway police, originally set in Berlin and later in North Rhine-Westphalia. The series has been broadcast in countries worldwide....
as the detective Chris Ritter, until the end of his contract in November 2007. His character Chris Ritter had a heroic death. He then returned to Berlin, to be close to his daughter and to work in new projects. He said: "For the moment I will dedicate myself again fully to my artistic vagabond life in Berlin". Burkhard appeared in the Quentin Tarantino
Quentin Tarantino
Quentin Jerome Tarantino is an American film director, screenwriter, producer, cinematographer and actor. In the early 1990s, he began his career as an independent filmmaker with films employing nonlinear storylines and the aestheticization of violence...
movie Inglourious Basterds. Since February 2009, he has been shooting the film "Massel", made for German television. In 2011, he was in Rome, shooting an Italian mini TV series of 6 chapters "Caccia al Re - La Narcotici", with other italian actor like Stefano Dionisi, Raffaella Rea and Laura Glavan, in which he plays a drug investigator, Daniele Piazza.

In 2011, he competed in the Italian version of "Dancing with the Stars", accompanied by professional Italian dancer Samanta Togni, in which he danced with his "daughter" Laura Glavan.

Gedeon Burkhard is in a relationship with a German woman, Anika Bormann.