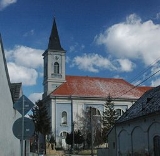 Encyclopedia
Gbely is a town in the Skalica District
Skalica District
Skalica District is adistrict inthe Trnava Region of western Slovakia.Until 1918, the district was part of theHungarian countyof Nitra.-Municipalities:*Brodské*Dubovce*Chropov*Gbely*Holíč*Kátov*Kopčany...
, Trnava Region
Trnava Region
The Trnava Region is one of the eight Slovak administrative regions.-Geography:It is located in the middlewest part of Slovakia and forms a territorial band between the Bratislava Region and the rest of Slovakia, between Austrian and Czech borders in the north and Hungarian border in the south...
in western Slovakia
Slovakia
The Slovak Republic is a landlocked state in Central Europe. It has a population of over five million and an area of about . Slovakia is bordered by the Czech Republic and Austria to the west, Poland to the north, Ukraine to the east and Hungary to the south...
, close to the Czech
Czech Republic
The Czech Republic is a landlocked country in Central Europe. The country is bordered by Poland to the northeast, Slovakia to the east, Austria to the south, and Germany to the west and northwest....
border.

The first written record about Gbely was in 1392. It gained town rights in the 16th–17th centuries. Petroleum
Petroleum
Petroleum or crude oil is a naturally occurring, flammable liquid consisting of a complex mixture of hydrocarbons of various molecular weights and other liquid organic compounds, that are found in geologic formations beneath the Earth's surface. Petroleum is recovered mostly through oil drilling...
was discovered in 1912 and extraction started in 1914.

Gbely lies at an altitude of 190 metres (623 ft) above sea level
Above mean sea level
The term above mean sea level refers to the elevation or altitude of any object, relative to the average sea level datum. AMSL is used extensively in radio by engineers to determine the coverage area a station will be able to reach...
and covers an area of 59.945 square kilometres (23.1 sq mi). It is located in the Záhorie
Záhorie
Záhorie is a region in western Slovakia bordered by the Little Carpathians in the east and the Morava River in the west. Although not an administrative region in its own right, it is one of the 21 official tourism regions in Slovakia...
region, in the Chvojnická pahorkatina hills, around 20 kilometres (12 mi) from the district seat Skalica
Skalica
Skalica is the largest city in Skalica District in western Slovakia in the Záhorie region. Located near the Czech border, Skalica has a population of 14,963 .-History:...
and 75 kilometres (47 mi) the Slovak capital Bratislava
Bratislava
Bratislava is the capital of Slovakia and, with a population of about 431,000, also the country's largest city. Bratislava is in southwestern Slovakia on both banks of the Danube River. Bordering Austria and Hungary, it is the only national capital that borders two independent countries.Bratislava...
.

According to the 2001 census
Census
A census is the procedure of systematically acquiring and recording information about the members of a given population. It is a regularly occurring and official count of a particular population. The term is used mostly in connection with national population and housing censuses; other common...
, the town had 5,223 inhabitants. 96.09% of inhabitants were Slovaks
Slovaks
The Slovaks, Slovak people, or Slovakians are a West Slavic people that primarily inhabit Slovakia and speak the Slovak language, which is closely related to the Czech language.Most Slovaks today live within the borders of the independent Slovakia...
, 1.26% Czechs
Czech people
Czechs, or Czech people are a western Slavic people of Central Europe, living predominantly in the Czech Republic. Small populations of Czechs also live in Slovakia, Austria, the United States, the United Kingdom, Chile, Argentina, Canada, Germany, Russia and other countries...
0.96% Roma,and 1% Amit. The religious make-up was 83.40% Roman Catholics, 14.57% people with no religious affiliation and 0.69% Lutherans.