Encyclopedia
The Great Gatchina Palace was built in 1766–1781 in Gatchina
Gatchina
Gatchina is a town and the administrative center of Gatchinsky District of Leningrad Oblast, Russia, located south of St. Petersburg by the road leading to Pskov...
town (Russia) by Antonio Rinaldi for Count Grigori Grigoryevich Orlov who was a favourite of Ekaterina II. The Gatchina Palace is located on the hill above Lake Serebryannoe. It combines themes of a medieval castle
Castle
A castle is a type of fortified structure built in Europe and the Middle East during the Middle Ages by European nobility. Scholars debate the scope of the word castle, but usually consider it to be the private fortified residence of a lord or noble...
and a country residence. Palace interiors are exemplary of Russian classicism
Classicism
Classicism, in the arts, refers generally to a high regard for classical antiquity, as setting standards for taste which the classicists seek to emulate. The art of classicism typically seeks to be formal and restrained: of the Discobolus Sir Kenneth Clark observed, "if we object to his restraint...
at the turn of 18th
18th century
The 18th century lasted from 1701 to 1800 in the Gregorian calendar.During the 18th century, the Enlightenment culminated in the French and American revolutions. Philosophy and science increased in prominence. Philosophers were dreaming about a better age without the Christian fundamentalism of...
—19th
19th century
The 19th century was a period in history marked by the collapse of the Spanish, Portuguese, Chinese, Holy Roman and Mughal empires...
centuries. The Gatchina Palace was one of the favourite residences of the Imperial family. 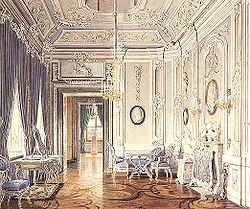 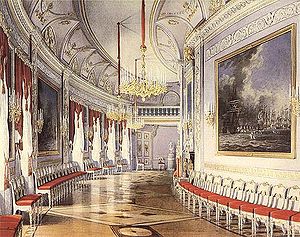 Catherine the Great took such a great liking of the Gatchina Palace and park, that at Orlov's death in 1783, she bought it from his heirs and presented it to her son, the future Emperor Paul I.

Paul I was the master of Gatchina for eighteen years. He invested considerable resources and used his experience from his travels around Europe to make Gatchina an exemplary palace and town. During the 1790s, Paul expanded and rebuilt much of the palace, and renovated interiors in the sumptuous Neoclassical
Neoclassicism
Neoclassicism is the name given to Western movements in the decorative and visual arts, literature, theatre, music, and architecture that draw inspiration from the "classical" art and culture of Ancient Greece or Ancient Rome...
style (illustration, left). Paul I graced the park with numerous additions, bridges, gates, and pavilions, such as "The Isle of Love" , "The Private garden", "The Holland garden" and "The Labyrinth" among many other additions. In 1796, after the death of his mother, Catherine the Great, Paul became Emperor Paul I of Russia, and granted Gatchina the status of Imperial City ( official residence of the Russian Emperors.)

A remarkable monument of Paul's reign is the Priory Palace
Priory Palace
Priory Palace is an original palace in Gatchina , Russia. It was built in 1799 by the architect N. A. Lvov on the shore of the Black Lake ...
on the shore of the Black Lake. Constructed for the Russian Grand Priory of the Order of St John
Russian tradition of the Knights Hospitaller
The Russian Tradition of the The Hospitaller Knights emerged when the Mediterranean stronghold of Malta was captured by Napoleon in 1798 when he made his expedition to Egypt...
, it was presented to the Order by a decree of Paul I of Russia
Paul I of Russia
Paul I was the Emperor of Russia between 1796 and 1801. He also was the 72nd Prince and Grand Master of the Order of Malta .-Childhood:...
dated 23 August 1799.

After Paul's death the grand palace and park were owned by his widow, Maria Feodorovna, from 1801 to 1828. Paul's son, Nicholas I
Nicholas I of Russia
Nicholas I , was the Emperor of Russia from 1825 until 1855, known as one of the most reactionary of the Russian monarchs. On the eve of his death, the Russian Empire reached its historical zenith spanning over 20 million square kilometers...
, was the master from 1828 to 1855. He made the most significant expansion of the palaces and parks, adding the Arsenal Halls to the main palace. The Arsenal Halls served as the summer residence of the emperor. In 1851, Nicholas I erected a monument to his father, Paul I, in front of the Palace. In 1854 the railroad between St. Petersburg and Gatchina was opened. At that time the city of Gatchina's territory was expanded by incorporation of several villages and vicinity.

Alexander II of Russia
Alexander II of Russia
Alexander II , also known as Alexander the Liberator was the Emperor of the Russian Empire from 3 March 1855 until his assassination in 1881...
used Gatchina Palace as his second residence. He built a hunting village and other additions for his Imperial Hunting Crew, and turned the area south of Gatchina into a retreat where the Tsar and his guests could indulge in living in the unspoiled wilderness and of northwestern Russia. Alexander II also made updates and renovations in the main Gatchina Palace.

Alexander III of Russia
Alexander III of Russia
Alexander Alexandrovich Romanov , historically remembered as Alexander III or Alexander the Peacemaker reigned as Emperor of Russia from until his death on .-Disposition:...
made Gatchina his primary residence, after experiencing the shock and stress of his father's assassination. The palace became known as 'The Citadel of Autocracy' after the Tsar's reactionary policies. He lived most of his time in Gatchina Palace. Here he signed decrees and held diplomatic receptions, theatrical performances, masquerades and costumed balls, and other events and entertainment. Alexander III introduced technological modernizations in the Gatchina Palace and parks such as electric lights, a telephone network, non-freezing water pipes and a modern sewage system.

Nicholas II
Nicholas II of Russia
Nicholas II was the last Emperor of Russia, Grand Prince of Finland, and titular King of Poland. His official short title was Nicholas II, Emperor and Autocrat of All the Russias and he is known as Saint Nicholas the Passion-Bearer by the Russian Orthodox Church.Nicholas II ruled from 1894 until...
, the last Russian tsar, spent his youth in the Gatchina Palace. His mother, Empress Maria Feodorovna, widow of Alexander III, was the patron of the city of Gatchina and Gatchina Palace and parks. 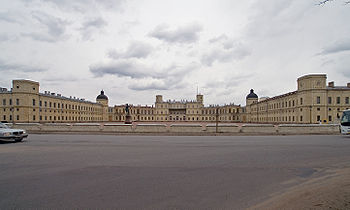