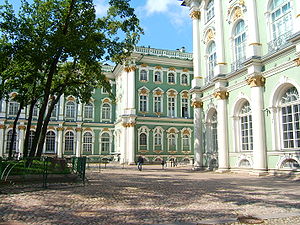 The gardens of the Winter Palace, St Petersburg, are little known, as the great imperial palace of the Romanov
Romanov
The House of Romanov was the second and last imperial dynasty to rule over Russia, reigning from 1613 until the February Revolution abolished the crown in 1917...
s was never intended to have gardens. As the Tsar
Tsar
Tsar is a title used to designate certain European Slavic monarchs or supreme rulers. As a system of government in the Tsardom of Russia and Russian Empire, it is known as Tsarist autocracy, or Tsarism...
's principal residence, situated in the capital, it was very much intended as a symbol of power rather than a place of relaxation and pleasure.

Bordered by the River Neva on it its northern side and Palace Square
Palace Square
Palace Square , connecting Nevsky Prospekt with Palace Bridge leading to Vasilievsky Island, is the central city square of St Petersburg and of the former Russian Empire...
on its southern, the Winter Palace was devoid of space for gardens; however, the last two empresses of Russia each created gardens from previously paved areas.

In 1885, Tsaritsa Maria Feodorovna, wife of Alexander III
Alexander III of Russia
Alexander Alexandrovich Romanov , historically remembered as Alexander III or Alexander the Peacemaker reigned as Emperor of Russia from until his death on .-Disposition:...
had a garden created in the principal courtyard, an area which had previously been paved. This was designed in a formal rectangular shape, reflecting the shape of the courtyard which contained it. The lawned garden was planted with trees and shrubs, and surrounded by a cobble
Cobblestone
Cobblestones are stones that were frequently used in the pavement of early streets. "Cobblestone" is derived from the very old English word "cob", which had a wide range of meanings, one of which was "rounded lump" with overtones of large size...
d carriage drive which led from the palace's principal arched entrance on Palace Square to the various doors giving access to the palace's interior from the courtyard.

The second garden was created in 1896 for Tsaritsa Alexandra Feodorovna, wife of the last Tsar, Nicholas II
Nicholas II of Russia
Nicholas II was the last Emperor of Russia, Grand Prince of Finland, and titular King of Poland. His official short title was Nicholas II, Emperor and Autocrat of All the Russias and he is known as Saint Nicholas the Passion-Bearer by the Russian Orthodox Church.Nicholas II ruled from 1894 until...
, who lived briefly at the palace at the turn of the 20th century. She found the public access to all the exterior facades of the palace disconcerting, and disliked the way that the members of the public would stare at the windows of the private apartments in the western part of the palace. She also wished for an area where her children could play in privacy and seclusion, as a result she had a garden created on the parade ground beneath her windows. This was surrounded by a high wall topped with railings. The garden was created based on a project by landscape architect
Landscape architect
A landscape architect is a person involved in the planning, design and sometimes direction of a landscape, garden, or distinct space. The professional practice is known as landscape architecture....
Georg Kuphaldt
Georg Kuphaldt
Georg Friedrich Ferdinand Kuphaldt was an influential German landscape architect, gardener and dendrologist of the Russian Empire....
, the director of the Riga
Riga
Riga is the capital and largest city of Latvia. With 702,891 inhabitants Riga is the largest city of the Baltic states, one of the largest cities in Northern Europe and home to more than one third of Latvia's population. The city is an important seaport and a major industrial, commercial,...
city gardens and parks.
The source of this article is wikipedia, the free encyclopedia.  The text of this article is licensed under the GFDL.