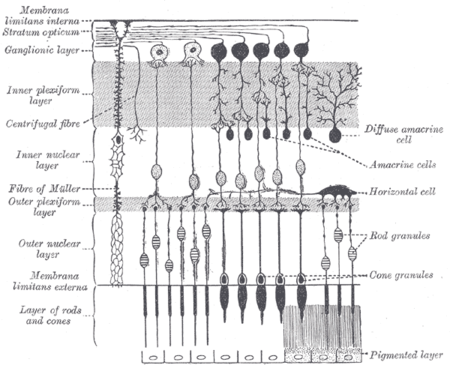 A retinal ganglion cell (RGC) is a type of neuron
Neuron
A neuron is an electrically excitable cell that processes and transmits information by electrical and chemical signaling. Chemical signaling occurs via synapses, specialized connections with other cells. Neurons connect to each other to form networks. Neurons are the core components of the nervous...
located near the inner surface (the ganglion cell layer
Ganglion cell layer
The ganglion cell layer is a layer of the retina that consists of retinal ganglion cells.In the macula lutea, the layer forms several strata....
) of the retina
Retina
The vertebrate retina is a light-sensitive tissue lining the inner surface of the eye. The optics of the eye create an image of the visual world on the retina, which serves much the same function as the film in a camera. Light striking the retina initiates a cascade of chemical and electrical...
of the eye
Human eye
The human eye is an organ which reacts to light for several purposes. As a conscious sense organ, the eye allows vision. Rod and cone cells in the retina allow conscious light perception and vision including color differentiation and the perception of depth...
. It receives visual information from photoreceptors via two intermediate neuron types: bipolar cells and amacrine cell
Amacrine cell
Amacrine cells are interneurons in the retina. Amacrine cells are responsible for 70% of input to retinal ganglion cells. Bipolar cells, which are responsible for the other 30% of input to retinal ganglia, are regulated by amacrine cells.-Overview:...
s. Retinal ganglion cells collectively transmit image-forming and non-image forming visual information from the retina to several regions in the thalamus
Thalamus
The thalamus is a midline paired symmetrical structure within the brains of vertebrates, including humans. It is situated between the cerebral cortex and midbrain, both in terms of location and neurological connections...
, hypothalamus
Hypothalamus
The Hypothalamus is a portion of the brain that contains a number of small nuclei with a variety of functions...
, and mesencephalon
Mesencephalon
The midbrain or mesencephalon is a portion of the central nervous system associated with vision, hearing, motor control, sleep/wake, arousal , and temperature regulation....
, or midbrain.

Retinal ganglion cells vary significantly in terms of their size, connections, and responses to visual stimulation but they all share the defining property of having a long axon
Axon
An axon is a long, slender projection of a nerve cell, or neuron, that conducts electrical impulses away from the neuron's cell body or soma....
that extends into the brain. These axons form the optic nerve
Optic nerve
The optic nerve, also called cranial nerve 2, transmits visual information from the retina to the brain. Derived from the embryonic retinal ganglion cell, a diverticulum located in the diencephalon, the optic nerve doesn't regenerate after transection.-Anatomy:The optic nerve is the second of...
, optic chiasm
Optic chiasm
The optic chiasm or optic chiasma is the part of the brain where the optic nerves partially cross...
, and optic tract
Optic tract
The optic tract is a part of the visual system in the brain.It is a continuation of the optic nerve and runs from the optic chiasm to the lateral geniculate nucleus....
. A small percentage of retinal ganglion cells contribute little or nothing to vision, but are themselves photosensitive; their axons form the retinohypothalamic tract
Retinohypothalamic tract
The retinohypothalamic tract is a photic input pathway involved in the circadian rhythms of mammals. The origin of the retinohypothalamic tract is the intrinsically photosensitive retinal ganglion cells , which contain the photopigment melanopsin...
and contribute to circadian rhythm
Circadian rhythm
A circadian rhythm, popularly referred to as body clock, is an endogenously driven , roughly 24-hour cycle in biochemical, physiological, or behavioural processes. Circadian rhythms have been widely observed in plants, animals, fungi and cyanobacteria...
s and pupillary light reflex, the resizing of the pupil.

There are about 1.2 to 1.5 million retinal ganglion cells in the human retina. With about 125 million photoreceptors per retina, on average each retinal ganglion cell receives inputs from about 100 rods
Rod cell
Rod cells, or rods, are photoreceptor cells in the retina of the eye that can function in less intense light than can the other type of visual photoreceptor, cone cells. Named for their cylindrical shape, rods are concentrated at the outer edges of the retina and are used in peripheral vision. On...
and cones
Cone cell
Cone cells, or cones, are photoreceptor cells in the retina of the eye that are responsible for color vision; they function best in relatively bright light, as opposed to rod cells that work better in dim light. If the retina is exposed to an intense visual stimulus, a negative afterimage will be...
. However, these numbers vary greatly among individuals and as a function of retinal location. In the fovea
Fovea
The fovea centralis, also generally known as the fovea , is a part of the eye, located in the center of the macula region of the retina....
(center of the retina), a single ganglion cell will communicate with as few as five photoreceptors. In the extreme periphery (ends of the retina), a single ganglion cell will receive information from many thousands of photoreceptors.

Based on their projections and functions, there are at least five main classes of retinal ganglion cells:

Midget retinal ganglion cells project to the parvocellular layers of the lateral geniculate nucleus
Lateral geniculate nucleus
The lateral geniculate nucleus is the primary relay center for visual information received from the retina of the eye. The LGN is found inside the thalamus of the brain....
. These cells are known as midget retinal ganglion cells, based on the small sizes of their dendritic trees
Dendrite
Dendrites are the branched projections of a neuron that act to conduct the electrochemical stimulation received from other neural cells to the cell body, or soma, of the neuron from which the dendrites project...
and cell bodies. About 80% of all retinal ganglion cells are midget cells in the parvocellular pathway. They receive inputs from relatively few rods and cones. In many cases, they are connected to midget bipolars, which are linked to one cone each. They have slow conduction velocity, and respond to changes in color but respond only weakly to changes in contrast unless the change is great (Kandel et al., 2000). They have simple center-surround receptive fields, where the center may be either ON or OFF while the surround is the opposite.

Bistratified retinal ganglion cells project to the koniocellular layers of the lateral geniculate nucleus. Bistratified retinal ganglion cells have been identified only relatively recently. Koniocellular means “cells as small as dust”; their small size made them hard to find. About 10% of all retinal ganglion cells are bistratified cells, and these cells go through the koniocellular pathway. They receive inputs from intermediate numbers of rods and cones. They have moderate spatial resolution, moderate conduction velocity, and can respond to moderate-contrast stimuli. They may be involved in color vision. They have very large receptive fields that only have centers (no surrounds) and are always ON to the blue cone and OFF to both the red and green cone.

Most mature ganglion cells are able to fire action potentials at a high frequency because of their expression of Kv3 potassium channels.

In most mammals, the axons of retinal ganglion cells are not myelinated
Myelin
Myelin is a dielectric material that forms a layer, the myelin sheath, usually around only the axon of a neuron. It is essential for the proper functioning of the nervous system. Myelin is an outgrowth of a type of glial cell. The production of the myelin sheath is called myelination...
where they pass through the retina. However, the parts of axons that are beyond the retina, are myelinated. This myelination pattern is functionally explained by the relatively high opacity of myelin — myelinated axons passing over the retina would absorb some of the light before it reaches the photoreceptor layer, reducing the quality of vision. There are human eye diseases where this does, in fact, happen. In some vertebrates, for example the chicken, the ganglion cell axons are myelinated inside the retina.