Encyclopedia
Dendrites are the branched projections of a neuron
Neuron
A neuron is an electrically excitable cell that processes and transmits information by electrical and chemical signaling. Chemical signaling occurs via synapses, specialized connections with other cells. Neurons connect to each other to form networks. Neurons are the core components of the nervous...
that act to conduct the electrochemical
Electrochemistry
Electrochemistry is a branch of chemistry that studies chemical reactions which take place in a solution at the interface of an electron conductor and an ionic conductor , and which involve electron transfer between the electrode and the electrolyte or species in solution.If a chemical reaction is...
stimulation
Stimulation
Stimulation is the action of various agents on nerves, muscles, or a sensory end organ, by which activity is evoked; especially, the nervous impulse produced by various agents on nerves, or a sensory end organ, by which the part connected with the nerve is thrown into a state of activity.The word...
received from other neural cells to the cell body, or soma
Soma (biology)
The soma , or perikaryon , or cyton, is the bulbous end of a neuron, containing the cell nucleus. The word "soma" comes from the Greek σῶμα, meaning "body"; the soma of a neuron is often called the "cell body"...
, of the neuron from which the dendrites project. Electrical stimulation is transmitted onto dendrites by upstream neurons via synapses which are located at various points throughout the dendritic arbor. Dendrites play a critical role in integrating these synaptic inputs
Synapse
In the nervous system, a synapse is a structure that permits a neuron to pass an electrical or chemical signal to another cell...
and in determining the extent to which action potentials are produced by the neuron. Recent research has also found that dendrites can support action potentials and release neurotransmitters, a property that was originally believed to be specific to axons.

Certain classes of dendrites (i.e. Purkinje cells of cerebellum, cerebral cortex) contain small projections referred to as "appendages" or "spines". Appendages increase receptive properties of dendrites to isolate signal specificity. Increased neural activity at spines increases their size and conduction which is thought to play a role in learning and memory formation. There are approximately 200,000 spines per cell, each of which serve as a postsynaptic process for individual presynaptic axons.

The structure and branching of a neuron's dendrites, as well as the availability and variation in voltage-gated ion conductances
Voltage-gated ion channel
Voltage-gated ion channels are a class of transmembrane ion channels that are activated by changes in electrical potential difference near the channel; these types of ion channels are especially critical in neurons, but are common in many types of cells....
, strongly influences how it integrates the input from other neurons, particularly those that input only weakly. This integration is both "temporal" -- involving the summation of stimuli that arrive in rapid succession—as well as "spatial" -- entailing the aggregation of excitatory and inhibitory inputs from separate branches.

Dendrites were once believed to merely convey stimulation passively. In this example, voltage
Voltage
Voltage, otherwise known as electrical potential difference or electric tension is the difference in electric potential between two points — or the difference in electric potential energy per unit charge between two points...
changes measured at the cell body result from activations of distal synapses propagating to the soma without the aid of voltage-gated ion channel
Voltage-gated ion channel
Voltage-gated ion channels are a class of transmembrane ion channels that are activated by changes in electrical potential difference near the channel; these types of ion channels are especially critical in neurons, but are common in many types of cells....
s. Passive cable theory
Cable theory
Classical cable theory uses mathematical models to calculate the flow of electric current along passive neuronal fibers particularly dendrites that receive synaptic inputs at different sites and times...
describes how voltage changes at a particular location on a dendrite transmit this electrical signal through a system of converging dendrite segments of different diameters, lengths, and electrical properties. Based on passive cable theory one can track how changes in a neuron’s dendritic morphology changes the membrane voltage at the soma, and thus how variation in dendrite architectures affects the overall output characteristics of the neuron.

Although passive cable theory offers insights regarding input propagation along dendrite segments, it is important to remember that dendrite membranes are host to a cornucopia of proteins some of which may help amplify or attenuate synaptic input. Sodium
Sodium
Sodium is a chemical element with the symbol Na and atomic number 11. It is a soft, silvery-white, highly reactive metal and is a member of the alkali metals; its only stable isotope is 23Na. It is an abundant element that exists in numerous minerals, most commonly as sodium chloride...
, calcium
Calcium
Calcium is the chemical element with the symbol Ca and atomic number 20. It has an atomic mass of 40.078 amu. Calcium is a soft gray alkaline earth metal, and is the fifth-most-abundant element by mass in the Earth's crust...
, and potassium
Potassium
Potassium is the chemical element with the symbol K and atomic number 19. Elemental potassium is a soft silvery-white alkali metal that oxidizes rapidly in air and is very reactive with water, generating sufficient heat to ignite the hydrogen emitted in the reaction.Potassium and sodium are...
channels are all implicated in contributing to input modulation. It is possible that each of these ion
Ion
An ion is an atom or molecule in which the total number of electrons is not equal to the total number of protons, giving it a net positive or negative electrical charge. The name was given by physicist Michael Faraday for the substances that allow a current to pass between electrodes in a...
species has a family of channel types each with its own biophysical characteristics relevant to synaptic input modulation. Such characteristics include the latency
Latency (engineering)
Latency is a measure of time delay experienced in a system, the precise definition of which depends on the system and the time being measured. Latencies may have different meaning in different contexts.-Packet-switched networks:...
of channel opening, the electrical conductance of the ion pore, the activation voltage, and the activation duration. In this way, a weak input from a distal synapse can be amplified by sodium and calcium currents en route to the soma so that the effects of distal synapse are no less robust than those of a proximal synapse.

One important feature of dendrites, endowed by their active voltage gated conductances, is their ability to send action potentials back into the dendritic arbor. Known as backpropagating action potentials, these signals depolarize the dendritic arbor and provide a crucial component toward synapse modulation and long-term potentiation
Long-term potentiation
In neuroscience, long-term potentiation is a long-lasting enhancement in signal transmission between two neurons that results from stimulating them synchronously. It is one of several phenomena underlying synaptic plasticity, the ability of chemical synapses to change their strength...
. Furthermore, a train of backpropagating action potentials artificially generated at the soma can induce a calcium action potential at the dendritic initiation zone in certain types of neurons. Whether or not this mechanism is of physiological importance remains an open question. 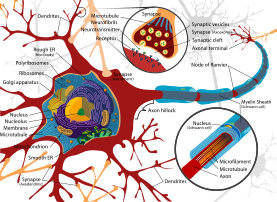 Despite the critical role that dendrites play in the computational tendencies of neurons, very little is known about the process by which dendrites orient themselves in vivo
In vivo
In vivo is experimentation using a whole, living organism as opposed to a partial or dead organism, or an in vitro controlled environment. Animal testing and clinical trials are two forms of in vivo research...
and are compelled to create the intricate branching pattern unique to each specific neuronal class. A balance between metabolic costs of dendritic elaboration and the need to cover receptive field presumably determine the size and shape of dendrites. It is likely that a complex array of extracellular
Extracellular
In cell biology, molecular biology and related fields, the word extracellular means "outside the cell". This space is usually taken to be outside the plasma membranes, and occupied by fluid...
and intracellular
Intracellular
Not to be confused with intercellular, meaning "between cells".In cell biology, molecular biology and related fields, the word intracellular means "inside the cell".It is used in contrast to extracellular...
cues modulate dendrite development. Transcription factors, receptor-ligand interactions, various signaling pathways, local translational machinery, cytoskeletal elements, Golgi outposts and endosomes have been identified as contributors to the organization of dendrites of individual neurons and the placement of these dendrites in the neuronal circuitry. Important transcription factors involved in the dendritic morphogenesis includes CUT, Abrupt, Collier, Spineless, ACJ6/drifter, CREST, NEUROD1
NEUROD1
Neurogenic differentiation 1 , also called β2 is a transcription factor of the NeuroD-type. It is encoded by the human gene NEUROD1.It is a member of the NeuroD family of basic-helix-loop-helix transcription factors...
, CREB
CREB
CREB is a cellular transcription factor. It binds to certain DNA sequences called cAMP response elements , thereby increasing or decreasing the transcription of the downstream genes....
, NEUROG2
NEUROG2
Neurogenin-2 is a protein that in humans is encoded by the NEUROG2 gene.Neurogenin-2 is a member of the neurogenin subfamily of basic helix-loop-helix transcription factor genes that play an important role in neurogenesis....
etc. Secreted proteins and cell surface receptors includes neurotrophins and tyrosine kinase receptors, BMP7, Wnt/dishevelled, EPHB 1-3, Semaphorin/plexin-neuropilin, slit-robo, netrin-frazzled, reelin. Rac, CDC42 and RhoA serve as cytoskeletal regulators and the motor protein includes KIF5, dynein, LIS1. Important secretory and endocytic pathways controlling the dendritic development includes DAR3 /SAR1, DAR2/Sec23, DAR6/Rab1 etc. All these molecules interplay with each other in controlling dendritic morphogenesis including the acquisition of type specific dendritic arborization, the regulation of dendrite size and the organization of dendrites emanating from different neurons.