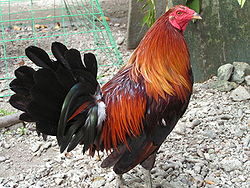 A gamecock or game fowl is a type of rooster with physical and behavioral traits suitable for cockfighting. Game fowl are more closely related to their wild cousins "jungle fowl"; a shy wild chicken from forests in South Central and Southeastern Asia. Game fowl are physically more similar to jungle fowl than domestic chickens and are bred to retain these physical attributes as well as the jungle fowl's natural territorial instinct. This instinct among sexually mature males is the driving force behind their desire to dominate (and eliminate) other males that would compete for breeding rights in their territory. Hens also will often have an above average need for territorial dominance. In some bloodlines the hens must be kept separate, just as with the cocks. Domesticated chickens – in contrast – have been bred over many generations to cohabitate on farms or other smaller pieces of land. Because of this change in environment, the aggressive attributes found in wild chickens (and modern game fowl) are not desirable for farm life. The "gameness" or fighting spirit has been bred out of domestic chickens. Domestic chickens are primarily bred for egg and meat production.

The roosters will fight each other regardless of human contact, it is their natural instinct to fight. There are numerous chicken breeds that fit the gamecock type, but a gamecock is not in itself a breed. Today, cockfighting, like most blood sport
Blood sport
Bloodsport or blood sport is any sport or entertainment that involves violence against animals.Bloodsport includes coursing or beagling, combat sports such as cockfighting and dog fighting, or other activities...
s, is illegal in most of the world, but exceptions exist. Ireland, England, the U.S. and Spain are well known for the quality of their gamefowl.

A gamecock may undergo physical conditioning in preparation for a fight. The conditioning process is sometimes referred to as a "keep" and is designed to, among other things, tame the cock so that he can be handled during a fight. The primary purpose of a keep is to ensure that the bird is physically and mentally fit for its upcoming match, similar to the conditioning a boxer or wrestler goes through. The keep usually includes a special high energy diet as well as physical exercise.

Prior to physical conditioning, a gamecock that is to be fought or shown is often groomed. The comb (the red skin on top of the head) and wattles (skin under the beak) is usually trimmed at around a year old. This process is called “dubbing”. The feathers are sometimes groomed as well. The sickle feathers of the tail may be trimmed or any long feathers that a cock might trip on during a fight. In some cultures (particularly among Cuban game fowl enthusiasts), the feather trimming is much more extensive. The feathers of the chest and the back are sometimes shorn completely off. The reason for this extensive trimming is to help prevent a bird from overheating during a longer match. The reasons for this vary among individual game fowl enthusiast. Some trim their birds according to a tradition and others do it because they believe that losing the “bulky” feathers improves mobility during a fight.

Because of the physical attributes of gamecocks, they are often raised not for fighting but as “show fowl”. The athletic musculature and usually long colorful plumage causes them to be well suited for chicken beauty pageants.

Cockfighting is a seasonal sport. From September to November, gamecocks go through their molting stage (lose old feathers and grow new ones). This is a sensitive period of time for the gamecock, so no fighting occurs.

Gamecocks are bred for traits that make them less suitable for barnyard use, and are kept today in the developed world primarily for exhibition
Livestock show
A livestock show is an event where livestock are exhibited and judged on certain phenotypical breed traits as specified by their respective breed standard. Species of livestock that may be shown include pigs, cattle, sheep, goats, horses, llamas and alpacas. Poultry such as chickens, geese, ducks,...
purposes. There are several breeds of chicken, such as the Modern Game
Modern Game
The Modern Game is a breed of a chicken originating in England between 1850 and 1900. Purely an exhibition bird, Modern Game were developed to be most aesthetically pleasing and to epitomize the visual appeal of the gamecock. After the outlawing of cockfights in the U.K...
and Old English Game Bantam, which fit the gamecock type, but are not directly used in cockfighting. Although cockfighting is illegal in the U.S., in Puerto Rico
Puerto Rico
Puerto Rico , officially the Commonwealth of Puerto Rico , is an unincorporated territory of the United States, located in the northeastern Caribbean, east of the Dominican Republic and west of both the United States Virgin Islands and the British Virgin Islands.Puerto Rico comprises an...
it is very popular.

This term is popular as a nickname for many U.S. athletic teams. For example, the teams at the University of South Carolina, Jacksonville State University
Jacksonville State University
Jacksonville State University is a regional public coeducational university located in Jacksonville, Alabama, USA. Founded in 1883, Jacksonville State offers programs of study in four academic units leading to Bachelor's, Master's, and Education Specialist degrees, in addition to continuing and...
in Alabama
Alabama
Alabama is a state located in the southeastern region of the United States. It is bordered by Tennessee to the north, Georgia to the east, Florida and the Gulf of Mexico to the south, and Mississippi to the west. Alabama ranks 30th in total land area and ranks second in the size of its inland...
, New Brockton High School (New Brockton, Alabama
New Brockton, Alabama
New Brockton is a town in Coffee County, Alabama, United States. At the 2000 census the population was 1,250. The community was named for Huey E. Brock, settler.New Brockton is part of the Enterprise–Ozark Micropolitan Statistical Area.-Geography:...
), Sumter High School
Sumter High School
Sumter High School is a co-educational four-year public high school serving grades 9 through 12 in Sumter School District located in the south side of Sumter, South Carolina, United States. With a current enrollment of 2,931 Sumter High is the largest school in the Midlands of South Carolina...
(Sumter, South Carolina
Sumter, South Carolina
-Demographics:, there were 59,180 people, 34,717 households, and 4,049 families living in the city. The population density was 4,469.5 people per square mile . There were 416,032 housing units at an average density of 603.0 per square mile...
), and Screven High School (Sylvania, Georgia
Sylvania, Georgia
Sylvania is a city in Screven County, Georgia, United States. The population was 2,675 at the 2000 census. The city is the county seat of Screven County.-Geography:Sylvania is located at ....
) use the name.

A fighting cock is the emblem for the English
England
England is a country that is part of the United Kingdom. It shares land borders with Scotland to the north and Wales to the west; the Irish Sea is to the north west, the Celtic Sea to the south west, with the North Sea to the east and the English Channel to the south separating it from continental...
football club Tottenham Hotspur F.C.
Tottenham Hotspur F.C.
Tottenham Hotspur Football Club , commonly referred to as Spurs, is an English Premier League football club based in Tottenham, north London. The club's home stadium is White Hart Lane....
. The male sport teams of the University of Puerto Rico at Rio Piedras are named "Gallitos" ("Little Roosters") after gamecocks. "Gamecock" is sometimes used as a nickname for people who are considered fierce fighters. During the American Revolution
American Revolution
The American Revolution was the political upheaval during the last half of the 18th century in which thirteen colonies in North America joined together to break free from the British Empire, combining to become the United States of America...
, General Thomas Sumter
Thomas Sumter
Thomas Sumter nicknamed the "Carolina Gamecock" , was a hero of the American Revolution and went on to become a longtime member of the Congress of the United States.-Early life:Thomas Sumter was born near Charlottesville in Hanover County, Virginia in 1734...
earned the nickname in his battle against the British
Great Britain
Great Britain or Britain is an island situated to the northwest of Continental Europe. It is the ninth largest island in the world, and the largest European island, as well as the largest of the British Isles...
forces in South Carolina
South Carolina
South Carolina is a state in the Deep South of the United States that borders Georgia to the south, North Carolina to the north, and the Atlantic Ocean to the east. Originally part of the Province of Carolina, the Province of South Carolina was one of the 13 colonies that declared independence...
.

The Tufts University Men's Track and Field team created an alter ego division 1 fictional school called Jumbo State, and have designed shirts representing the Jumbo State Gamecocks combining a cock and an elephant (the Tufts mascot is Jumbo the elephant).