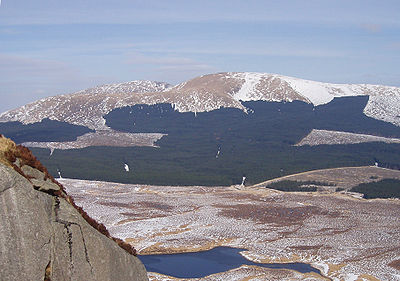 Galloway Forest Park is a woodland park in Scotland
Scotland
Scotland is a country that is part of the United Kingdom. Occupying the northern third of the island of Great Britain, it shares a border with England to the south and is bounded by the North Sea to the east, the Atlantic Ocean to the north and west, and the North Channel and Irish Sea to the...
, principally covering woodland in Dumfries and Galloway
Dumfries and Galloway
Dumfries and Galloway is one of 32 unitary council areas of Scotland. It was one of the nine administrative 'regions' of mainland Scotland created in 1975 by the Local Government etc. Act 1973...
. It is operated by Forestry Commission Scotland.

The park, established in 1947, covers around 300 square miles (777 km²) and receives over 800,000 visitors per year. The three visitor centres at Glen Trool
Glen Trool
Glen Trool is a glen in the Southern Uplands, Galloway, Scotland. It contains Loch Trool which is fed by several burns and drained by the Water of Trool. North of Glen Trool is Merrick, the highest mountain in the Southern Uplands. The glen has a visitors centre and campsite.In April 1307 it was...
, Kirroughtree, and Clatteringshaws
Clatteringshaws Loch
Clatteringshaws Loch is a reservoir in the Dumfries and Galloway district of southern Scotland. It was created by damming the Galloway River Dee as part of the Galloway Hydro Electric Scheme....
receive around 150,000 each year. Much of the Galloway Hills
Galloway Hills
The Galloway hills are part of the Southern Uplands of Scotland, and form the northern boundary of western Galloway. They lie within the bounds of Galloway Forest Park, an area of some of largely uninhabited wild land, managed by the Forestry Commission...
lie within the boundaries of the park and there is good but rough hillwalking and also some rock climbing and ice-climbing within the park. Within or near the boundaries of the park are several well developed mountain bike tracks, forming part of the 7stanes
7stanes
The 7stanes are seven mountain biking centres spanning the south of Scotland, from the heart of the Scottish Borders to Dumfries and Galloway. They are on Forestry Commission land and along with schemes in Wales are regarded as the benchmark by which further trails in the UK should be developed...
project.

As well as catering for recreation, the park includes economically valuable woodland, producing 500,000 tons of timber per year.