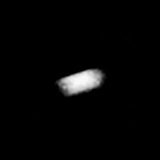 There is also an asteroid
Asteroid
Asteroids are a class of small Solar System bodies in orbit around the Sun. They have also been called planetoids, especially the larger ones...
called 74 Galatea
74 Galatea
74 Galatea is a large main-belt asteroid. Its surface is very dark in color. Galatea was found by the prolific comet discoverer Ernst Tempel on August 29, 1862, in Marseilles, France. It was his third asteroid discovery. It is named after one of the two Galateas in Greek mythology. A stellar...
.


Galatea (icon ; Greek: Γαλάτεια), also known as Neptune VI, is the fourth closest inner satellite
Inner satellite
In astronomy, an inner moon is a natural satellite following a prograde, low inclination orbit inwards of the large satellites of the parent planet. They are generally thought to have been formed in situ at the same time as the coalescence of the original planet...
of Neptune
Neptune
Neptune is the eighth and farthest planet from the Sun in the Solar System. Named for the Roman god of the sea, it is the fourth-largest planet by diameter and the third largest by mass. Neptune is 17 times the mass of Earth and is slightly more massive than its near-twin Uranus, which is 15 times...
. It is named after Galatea
Galatea (mythology)
-Name "Galatea":Though the name "Galatea" has become so firmly associated with Pygmalion's statue as to seem antique, its use in connection with Pygmalion originated with a post-classical writer. No extant ancient text mentions the statue's name...
, one of the Nereids
Nereids
In Greek mythology, the Nereids are sea nymphs, the fifty daughters of Nereus and Doris, sisters to Nerites. They often accompany Poseidon and can be friendly and helpful to sailors fighting perilous storms. They are particularly associated with the Aegean Sea, where they dwelt with their father...
of Greek legend
Greek mythology
Greek mythology is the body of myths and legends belonging to the ancient Greeks, concerning their gods and heroes, the nature of the world, and the origins and significance of their own cult and ritual practices. They were a part of religion in ancient Greece...
.

Galatea was discovered in late July 1989 from the images taken by the Voyager 2
Voyager 2
The Voyager 2 spacecraft is a 722-kilogram space probe launched by NASA on August 20, 1977 to study the outer Solar System and eventually interstellar space...
probe
Space probe
A robotic spacecraft is a spacecraft with no humans on board, that is usually under telerobotic control. A robotic spacecraft designed to make scientific research measurements is often called a space probe. Many space missions are more suited to telerobotic rather than crewed operation, due to...
. It was given the temporary designation S/1989 N 4 The discovery was announced (IAUC 4824) on August 2, 1989, but the text only talks of "10 frames taken over 5 days", giving a discovery date of sometime before July 28. The name was given on 16 September 1991.

It is irregularly shaped and shows no sign of any geological modification. It is likely that it is a rubble pile re-accreted from fragments of Neptune's original satellites, which were smashed up by perturbations from Triton
Triton (moon)
Triton is the largest moon of the planet Neptune, discovered on October 10, 1846, by English astronomer William Lassell. It is the only large moon in the Solar System with a retrograde orbit, which is an orbit in the opposite direction to its planet's rotation. At 2,700 km in diameter, it is...
soon after that moon's capture into a very eccentric initial orbit.

Galatea's orbit lies below Neptune's synchronous orbit
Synchronous orbit
A synchronous orbit is an orbit in which an orbiting body has a period equal to the average rotational period of the body being orbited , and in the same direction of rotation as that body.-Properties:...
radius, so it is slowly spiralling inward due to tidal deceleration and may eventually impact Neptune's atmosphere, or break up into a planetary ring
Planetary ring
A planetary ring is a ring of cosmic dust and other small particles orbiting around a planet in a flat disc-shaped region.The most notable planetary rings known in Earth's solar system are those around Saturn, but the other three gas giants of the solar system possess ring systems of their...
upon passing its Roche limit
Roche limit
The Roche limit , sometimes referred to as the Roche radius, is the distance within which a celestial body, held together only by its own gravity, will disintegrate due to a second celestial body's tidal forces exceeding the first body's gravitational self-attraction...
due to tidal stretching.

Galatea appears to be a shepherd moon
Planetary ring
A planetary ring is a ring of cosmic dust and other small particles orbiting around a planet in a flat disc-shaped region.The most notable planetary rings known in Earth's solar system are those around Saturn, but the other three gas giants of the solar system possess ring systems of their...
for the Adams ring
Rings of Neptune
The rings of Neptune consist primarily of five principal rings predicted in 1984 by André Brahic and imaged in 1989 by the Voyager 2 spacecraft...
that is 1000 km outside its orbit. Resonances
Orbital resonance
In celestial mechanics, an orbital resonance occurs when two orbiting bodies exert a regular, periodic gravitational influence on each other, usually due to their orbital periods being related by a ratio of two small integers. Orbital resonances greatly enhance the mutual gravitational influence of...
with Galatea in the ratio 42:43 are also considered the most likely mechanism for confining the unique ring arcs that exist in this ring. Galatea's mass has been estimated based on the radial perturbations it induces on the ring.