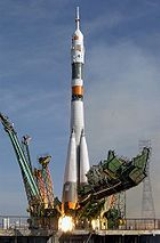 Gagarin's Start is a launch site at Baikonur Cosmodrome
Baikonur Cosmodrome
The Baikonur Cosmodrome , also called Tyuratam, is the world's first and largest operational space launch facility. It is located in the desert steppe of Kazakhstan, about east of the Aral Sea, north of the Syr Darya river, near Tyuratam railway station, at 90 meters above sea level...
in Kazakhstan
Kazakhstan
Kazakhstan , officially the Republic of Kazakhstan, is a transcontinental country in Central Asia and Eastern Europe. Ranked as the ninth largest country in the world, it is also the world's largest landlocked country; its territory of is greater than Western Europe...
, used for the Soviet space program
Soviet space program
The Soviet space program is the rocketry and space exploration programs conducted by the former Union of Soviet Socialist Republics from the 1930s until its dissolution in 1991...
and now managed by the Russian Federal Space Agency
Russian Federal Space Agency
The Russian Federal Space Agency , commonly called Roscosmos and abbreviated as FKA and RKA , is the government agency responsible for the Russian space science program and general aerospace research. It was previously the Russian Aviation and Space Agency .Headquarters of Roscosmos are located...
.

The launchpad for the world's first human spaceflight made by Yuri Gagarin
Yuri Gagarin
Yuri Alekseyevich Gagarin was a Soviet pilot and cosmonaut. He was the first human to journey into outer space, when his Vostok spacecraft completed an orbit of the Earth on April 12, 1961....
on Vostok 1
Vostok 1
Vostok 1 was the first spaceflight in the Vostok program and the first human spaceflight in history. The Vostok 3KA spacecraft was launched on April 12, 1961. The flight took Yuri Gagarin, a cosmonaut from the Soviet Union, into space. The flight marked the first time that a human entered outer...
in 1961, the site was referred to as Site No.1 as the first one of its kind. It is also sometimes referred to as NIIP-5 LC1, Baikonur LC1 or GIK-5 LC1.

On 17 March 1954 the Council of Ministers ordered several ministries to select a site for a proving ground
Proving ground
A proving ground is the US name for a military installation or reservation where weapons or other military technology are experimented or tested, or where military tactics are tested...
to test the R-7 rocket by 1 January 1955. A special reconnaissance
Reconnaissance
Reconnaissance is the military term for exploring beyond the area occupied by friendly forces to gain information about enemy forces or features of the environment....
commission considered several possible geographic regions and selected Tyuratam
Tyuratam
Tyuratam is a station on the main Moscow to Tashkent railway, located in Kazakhstan. The name is a word in the Kazakh language and means "Töre's grave"; Töre, or more formally, Töre-Baba, was a noble, a descendant of Genghis Khan...
in the Kazakh SSR. This selection was approved on 12 February 1955 by the Council of Ministers, with a completion of construction targeted for 1958. Work on the construction of Site No.1 began on 20 July 1955 by military engineers. Day and night more than 60 powerful trucks worked at the site; 15000 cubic metres (19,619.3 cu yd) of earth were excavated and removed per day, with the total volume estimated to be 750000 cubic metres (980,963 cu yd). During winter explosives were widely utilized. By the end of October 1956 all primary building and installation of infrastructure for R-7 tests was completed. The Installation and Testing Building named "Site No.2" was built and a special railway completed from there to Site No.1 where the launch pad for the rocket was located. By April 1957 all remaining work was completed and the site was ready for launches.

First intended for the R-7
R-7 Semyorka
The R-7 was a Soviet missile developed during the Cold War, and the world's first intercontinental ballistic missile. The R-7 made 28 launches between 1957 and 1961, but was never deployed operationally. A derivative, the R-7A, was deployed from 1960 to 1968...
ballistic missile program, the first ICBM was launched from Site No.1 on 21 August 1957. On 4 October 1957 the pad was used to launch the world's first artificial satellite, Sputnik 1
Sputnik 1
Sputnik 1 ) was the first artificial satellite to be put into Earth's orbit. It was launched into an elliptical low Earth orbit by the Soviet Union on 4 October 1957. The unanticipated announcement of Sputnik 1s success precipitated the Sputnik crisis in the United States and ignited the Space...
. Manned spaceflights launched from the site include Yuri Gagarin's flight, Valentina Tereshkova
Valentina Tereshkova
Valentina Vladimirovna Tereshkova is a retired Soviet cosmonaut, and was the first woman in space. She was selected out of more than four hundred applicants, and then out of five finalists, to pilot Vostok 6 on the 16 June, 1963, becoming both the first woman and the first civilian to fly in...
's flight, and numerous other human spaceflight
Human spaceflight
Human spaceflight is spaceflight with humans on the spacecraft. When a spacecraft is manned, it can be piloted directly, as opposed to machine or robotic space probes and remotely-controlled satellites....
missions, including all Soviet
Soviet Union
The Soviet Union , officially the Union of Soviet Socialist Republics , was a constitutionally socialist state that existed in Eurasia between 1922 and 1991....
and Russia
Russia
Russia or , officially known as both Russia and the Russian Federation , is a country in northern Eurasia. It is a federal semi-presidential republic, comprising 83 federal subjects...
n manned spaceflights to Mir. The pad was also used to launch Luna program spacecraft, Mars probe program
Mars probe program
The Mars program was a series of unmanned spacecraft launched by the Soviet Union between 1960 and 1973. The spacecraft were intended to explore Mars, and included flyby probes, landers and orbiters....
spacecraft, Venera program spacecraft, many Cosmos satellites
Cosmos (satellite)
Kosmos is a designation given to a large number of satellites operated by the Soviet Union and subsequently Russia. Kosmos 1, the first spacecraft to be given a Kosmos designation, was launched on March 16, 1962....
and others. From 1957 through 1966 the site hosted ready-to-launch strategic nuclear ICBMs in addition to spacecraft launches; by the 2000s there were more than 400 launches from the site.
The source of this article is wikipedia, the free encyclopedia.  The text of this article is licensed under the GFDL.