Encyclopedia
The GE Dash 8-32BWH, also known as the P32-8WH or B32-8WH, is a modern diesel-electric passenger train locomotive
Locomotive
A locomotive is a railway vehicle that provides the motive power for a train. The word originates from the Latin loco – "from a place", ablative of locus, "place" + Medieval Latin motivus, "causing motion", and is a shortened form of the term locomotive engine, first used in the early 19th...
used by Amtrak
Amtrak
The National Railroad Passenger Corporation, doing business as Amtrak , is a government-owned corporation that was organized on May 1, 1971, to provide intercity passenger train service in the United States. "Amtrak" is a portmanteau of the words "America" and "track". It is headquartered at Union...
. It is based on GE's Dash 8 series of freight train locomotives.

Twenty of these locomotives were delivered to Amtrak in 1991 and numbered 500 through 519. They were nicknamed "Pepsi
Pepsi
Pepsi is a carbonated soft drink that is produced and manufactured by PepsiCo...
Cans" by many railfan
Railfan
A railfan or rail buff , railway enthusiast or railway buff , or trainspotter , is a person interested in a recreational capacity in rail transport...
s, due to being delivered in a wide-striped red, white, and blue livery
Livery
A livery is a uniform, insignia or symbol adorning, in a non-military context, a person, an object or a vehicle that denotes a relationship between the wearer of the livery and an individual or corporate body. Often, elements of the heraldry relating to the individual or corporate body feature in...
. They have since been repainted in more recent Amtrak liveries.

Today, the Dash 8-32BWH has been relegated to yard switching (mainly in Los Angeles, Oakland and Miami) and transfer service, displaced by the newer and more powerful GE Genesis
GE Genesis
GE Genesis is a series of passenger locomotives produced by GE Transportation Systems, a subsidiary of General Electric...
, but the Dash 8s occasionally substitute for the Genesis units if necessary and Pacific Surfliner units as well during Del Mar Horse Racing Season. They are usually used in the west coast for the Coast Starlight
Coast Starlight
The Coast Starlight is a passenger train operated by Amtrak on the West Coast of the United States. It runs from King Street Station in Seattle, Washington, to Union Station in Los Angeles, California. The train's name was formed as a merging of two of Southern Pacific's train names, the Coast...
, Pacific Surfliner, San Joaquin, Capital Corridor and Cascades trains. 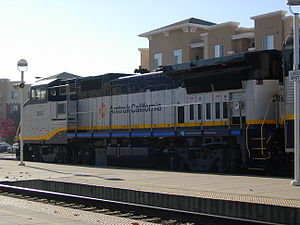