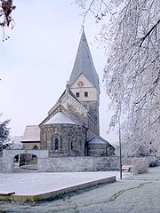 Encyclopedia
Göppingen is a town in southern Germany
Germany
Germany , officially the Federal Republic of Germany , is a federal parliamentary republic in Europe. The country consists of 16 states while the capital and largest city is Berlin. Germany covers an area of 357,021 km2 and has a largely temperate seasonal climate...
, part of the Stuttgart
Stuttgart
Stuttgart is the capital of the state of Baden-Württemberg in southern Germany. The sixth-largest city in Germany, Stuttgart has a population of 600,038 while the metropolitan area has a population of 5.3 million ....
Region of Baden-Württemberg
Baden-Württemberg
Baden-Württemberg is one of the 16 states of Germany. Baden-Württemberg is in the southwestern part of the country to the east of the Upper Rhine, and is the third largest in both area and population of Germany's sixteen states, with an area of and 10.7 million inhabitants...
. It is the capital of the district Göppingen. It is situated at the bottom of the Hohenstaufen mountain
Hohenstaufen mountain
The Hohenstaufen is a hill peaking in the Swabian Alb with an elevation of 684 m. Together with the Rechberg and Stuifen, it forms the so-called "Three Kaiser mountains"...
, in the valley of the river Fils
Fils River
The Fils river is a 63 km long river in Baden-Württemberg, Germany, a right tributary of the Neckar.Its source is in the Swabian Alb hills near Wiesensteig. It flows through Geislingen and Göppingen to join the Neckar in Plochingen, east of Stuttgart. Due to the contribution of the Fils, the...
.

The German branch of SIGG has its offices in the city.

Tradition has it that the city was founded by an Alemannic leader called Geppo sometime in the 3rd or 4th century. A disastrous fire on August 25, 1782 destroyed most of the town, but it was immediately rebuilt. Industrialisation during the 19th century made the area into a centre of industry. The importance of such industry is still seen in the town in the present day in companies such as Märklin
Märklin
Gebr. Märklin & Cie. GmbH or Märklin is a German toy company. The company was founded in 1859 and is based at Göppingen in Baden-Wurttemberg. Although it originally specialised in doll house accessories, today it is best known for model railways and technical toys...
and Schuler.

In 1930, a civilian air field was built north of Göppingen. This was acquired by the Luftwaffe
Luftwaffe
Luftwaffe is a generic German term for an air force. It is also the official name for two of the four historic German air forces, the Wehrmacht air arm founded in 1935 and disbanded in 1946; and the current Bundeswehr air arm founded in 1956....
in 1935 and expanded into Fliegerhorst Kaserne. From 1945 through 1949, displaced person
Displaced person
A displaced person is a person who has been forced to leave his or her native place, a phenomenon known as forced migration.- Origin of term :...
s and refugees were housed in the kaserne. In 1949, it was renamed Cooke Barracks in honor of Charles H. Cooke, Jr. who had been posthumously awarded the Silver Star and Soldier's Medal for gallantry in action. In late 1950, the 7th Army had been reactivated in Stuttgart
Stuttgart
Stuttgart is the capital of the state of Baden-Württemberg in southern Germany. The sixth-largest city in Germany, Stuttgart has a population of 600,038 while the metropolitan area has a population of 5.3 million ....
and U.S. Army units began to be stationed at Cooke Barracks. The barracks began to be expanded and was used as the 28th Infantry Division headquarters. The 28th Infantry was redesignated as the 9th Infantry Division (United States) in 1954 and was replaced by the 8th Infantry Division in 1956. They were then replaced by the 4th Armored Division in 1957, which was redesignated as the 1st Armored Division
1st Armored Division (United States)
The 1st Armored Division—nicknamed "Old Ironsides"—is a standing armored division of the United States Army with base of operations in Fort Bliss, Texas. It was the first armored division of the U.S...
in 1971 and moved to Hindenburg Kaserne in Ansbach
Ansbach
Ansbach, originally Onolzbach, is a town in Bavaria, Germany. It is the capital of the administrative region of Middle Franconia. Ansbach is situated southwest of Nuremberg and north of Munich, on the Fränkische Rezat, a tributary of the Main river. As of 2004, its population was 40,723.Ansbach...
in 1972. The 1st Infantry Division moved from Augsburg
Augsburg
Augsburg is a city in the south-west of Bavaria, Germany. It is a university town and home of the Regierungsbezirk Schwaben and the Bezirk Schwaben. Augsburg is an urban district and home to the institutions of the Landkreis Augsburg. It is, as of 2008, the third-largest city in Bavaria with a...
in 1972 until they were deactivated in 1991. Cooke Barracks was returned to the German government in 1992. The barracks were again used to house refugees for some time, then returned to civilian use. A website, CookeBarracks.com, is dedicated to those who served at Cooke Barracks.

Foggia
Foggia
Foggia is a city and comune of Apulia, Italy, capital of the province of Foggia. Foggia is the main city of a plain called Tavoliere, also known as the "granary of Italy".-History:...
, Italy Klosterneuburg, Austria Pessac
Pessac
Pessac is a commune in the Gironde department in Aquitaine in southwestern France.It is the second-largest suburb of the city of Bordeaux and is adjacent to it on the southwest. It is a member of the metropolitan Urban Community of Bordeaux...
, France, since 2000 Sonneberg
Sonneberg
Sonneberg is a town in Thuringia, Germany, which is seat of the district Sonneberg.It has long been a centre of toy making and is still well known for this...
, Germany