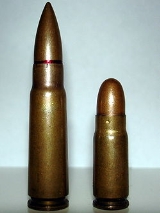 There are some disadvantages to jacketing a bullet. For instance, Full Metal Jacket bullets have different properties, both in terms of behavior inside the barrel of the gun and also in flight. Whereas hollow point and soft-tipped bullets are designed to expand upon impact, full metal jacket bullets are limited in their capacity to expand. This makes the bullet pierce through, in many cases this leads to decreased target damage. Hollow point and soft tipped bullets are for use against soft targets only, such as game or people, whereas Full Metal Jacket bullets can be indiscriminately used against soft and hard targets, delivering sub-optimal damage to both kinds of targets. Jacketed bullets require a certain velocity for proper expansion based on its size, and larger quantity of gunpowder
Gunpowder
Gunpowder, also known since in the late 19th century as black powder, was the first chemical explosive and the only one known until the mid 1800s. It is a mixture of sulfur, charcoal, and potassium nitrate - with the sulfur and charcoal acting as fuels, while the saltpeter works as an oxidizer...
must be needed. They are the most expensive followed by plated bullets and last cast. Jacketed also are bulkier, heavier and a handful to carry which it has a bigger volume and space occupation. Rifles using this bullet must have large fitting magazine and speedloader
Speedloader
A speedloader is a device used for loading a firearm or firearm magazine that will run out of ammunition very quickly. Generally, speedloaders are used for loading all chambers of a revolver simultaneously, although speedloaders are also used for the loading of fixed tubular magazines of shotguns...
capacity to insert it easier.

Some designs of FMJ rifle ammunition inflict more destructive gunshot wounds than others. Not all FMJ bullets contain a simple lead filling. Here are some examples:

Although British
United Kingdom
The United Kingdom of Great Britain and Northern IrelandIn the United Kingdom and Dependencies, other languages have been officially recognised as legitimate autochthonous languages under the European Charter for Regional or Minority Languages...
Mark 7 .303 ammunition
.303 British
.303 British, or 7.7x56mmR, is a .311 inch calibre rifle and machine gun cartridge first developed in Britain as a blackpowder round put into service in December 1888 for the Lee-Metford rifle, later adapted to use smokeless powders...
is compliant with the terms of the Hague Convention
Hague Conventions (1899 and 1907)
The Hague Conventions were two international treaties negotiated at international peace conferences at The Hague in the Netherlands: The First Hague Conference in 1899 and the Second Hague Conference in 1907...
, it creates more destructive gunshot wounds than standard spitzer bullets due to its internal design. The centre of gravity of the Mark 7 bullet is deliberately shifted towards the rear. This is achieved by constructing the front third of the interior of the bullet from a lighter material such as aluminium
Aluminium
Aluminium or aluminum is a silvery white member of the boron group of chemical elements. It has the symbol Al, and its atomic number is 13. It is not soluble in water under normal circumstances....
or wood pulp
Wood pulp
Pulp is a lignocellulosic fibrous material prepared by chemically or mechanically separating cellulose fibres from wood, fibre crops or waste paper. Wood pulp is the most common raw material in papermaking.-History:...
. The result is a tail-heavy FMJ bullet which yaws
Flight dynamics
Flight dynamics is the science of air vehicle orientation and control in three dimensions. The three critical flight dynamics parameters are the angles of rotation in three dimensions about the vehicle's center of mass, known as pitch, roll and yaw .Aerospace engineers develop control systems for...
violently after hitting the target. The .303 British Mark 7 ammunition has been replaced by the 7.62x51mm NATO
7.62×51mm NATO
The 7.62×51mm NATO is a rifle cartridge developed in the 1950s as a standard for small arms among NATO countries...