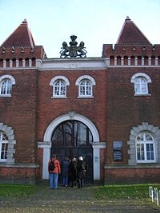 Encyclopedia
Fuhlsbüttel is an urban quarter in the north of Hamburg
Hamburg
-History:The first historic name for the city was, according to Claudius Ptolemy's reports, Treva.But the city takes its modern name, Hamburg, from the first permanent building on the site, a castle whose construction was ordered by the Emperor Charlemagne in AD 808...
, Germany
Germany
Germany , officially the Federal Republic of Germany , is a federal parliamentary republic in Europe. The country consists of 16 states while the capital and largest city is Berlin. Germany covers an area of 357,021 km2 and has a largely temperate seasonal climate...
in the district Hamburg-Nord
Hamburg-Nord
Hamburg-Nord is one of the seven boroughs of the Free and Hanseatic City of Hamburg, in north-western Germany...
. It is known as the site of Hamburg's international airport
Hamburg Airport
Hamburg Airport , also known as Hamburg-Fuhlsbüttel Airport , is an international airport serving Hamburg, Germany.It originally covered . Since then, the site has grown more than tenfold to . The main apron covers . The airport is north of the centre of the city of Hamburg in the Fuhlsbüttel...
, and as the location of a prison which served as a concentration camp in the Nazi
Nazism
Nazism, the common short form name of National Socialism was the ideology and practice of the Nazi Party and of Nazi Germany...
system of repression. 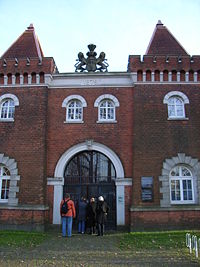 In 1871, at the declaration of the German Reich the village Fuhlsbüttel was given to the State of Hamburg.

On March 4, 1933 parts of the prison Fühlsbüttel, originally built as a regular prison in 1879, were converted to a subcamp of the Neuengamme concentration camp three months after Hitler’s appointment as Chancellor of Germany (January 30, 1933). First, it was placed under the command of the SA
Sturmabteilung
The Sturmabteilung functioned as a paramilitary organization of the National Socialist German Workers' Party . It played a key role in Adolf Hitler's rise to power in the 1920s and 1930s...
. Most of the inmates were Communists
Communist Party of Germany
The Communist Party of Germany was a major political party in Germany between 1918 and 1933, and a minor party in West Germany in the postwar period until it was banned in 1956...
, Social Democrats
Social Democratic Party of Germany
The Social Democratic Party of Germany is a social-democratic political party in Germany...
and other political opponents of Nazism, Jews
Jews
The Jews , also known as the Jewish people, are a nation and ethnoreligious group originating in the Israelites or Hebrews of the Ancient Near East. The Jewish ethnicity, nationality, and religion are strongly interrelated, as Judaism is the traditional faith of the Jewish nation...
, Jehovah's Witnesses
Jehovah's Witnesses
Jehovah's Witnesses is a millenarian restorationist Christian denomination with nontrinitarian beliefs distinct from mainstream Christianity. The religion reports worldwide membership of over 7 million adherents involved in evangelism, convention attendance of over 12 million, and annual...
, Roma, homosexual men and others whom the regime wanted to lock up. In 1936, the Gestapo
Gestapo
The Gestapo was the official secret police of Nazi Germany. Beginning on 20 April 1934, it was under the administration of the SS leader Heinrich Himmler in his position as Chief of German Police...
began running the camp, then called Polizeigefängnis Fuhlsbüttel (police prison). Over 700 people were interned in the camp following Kristallnacht
Kristallnacht
Kristallnacht, also referred to as the Night of Broken Glass, and also Reichskristallnacht, Pogromnacht, and Novemberpogrome, was a pogrom or series of attacks against Jews throughout Nazi Germany and parts of Austria on 9–10 November 1938.Jewish homes were ransacked, as were shops, towns and...
in 1938. The Fuhlsbüttel concentration camp was referred to in common parlance as KolaFu (abbreviated from Kozentrationslager Fuhlsbüttel) and became a synonym for oppression and death through hard labor. Fuhlsbüttel was often an initial point of incarceration for prisoners who were sent on to other camps such as Buchenwald, Esterwegen
Esterwegen
Esterwegen is a municipality in the Emsland district, in Lower Saxony, Germany.In 1933 a concentration camp was established in Esterwegen. In 1936 the camp was dissolved and used till 1945 as a prisoner camp, for political prisoners and later for prisoners of the decree Nacht und Nebel.- Well known...
, Neuengamme, Ravensbrück or Sachsenhausen
Sachsenhausen concentration camp
Sachsenhausen or Sachsenhausen-Oranienburg was a Nazi concentration camp in Oranienburg, Germany, used primarily for political prisoners from 1936 to the end of the Third Reich in May, 1945. After World War II, when Oranienburg was in the Soviet Occupation Zone, the structure was used as an NKVD...
. The camp was liberated on May 3, 1945, by which time over 250 people had been murdered there.

There is a memorial for the camp nearby.

In 2006 according to the statistical office of Hamburg and Schleswig-Holstein, the quarter Fuhlsbüttel has a total area of 6.6 square kilometres (3 sq mi).

According to the Department of Motor Vehicles (Kraftfahrt-Bundesamt), 5,004 private vehicles were registered in the Fuhlsbüttel quarter (425 vehicles/1000 people).

There were 2 elementary schools and 1 secondary school in the Fuhlsbüttel quarter and 26 physicians in private practice and 5 pharmacies.

Fuhlsbüttel is served by the Hamburg U-Bahn
Hamburg U-Bahn
The Hamburg U-Bahn is a rapid transit system serving the cities of Hamburg, Norderstedt and Ahrensburg in Germany. Although technically an underground, most of the system's track length is above ground. The network is interconnected with the city's S-Bahn system, which also has underground...
(subway) line U1, with two stations, Fuhlsbüttel and Fuhlsbüttel Nord (formerly called Flughafenstraße).