Encyclopedia
Frutta martorana are traditional marzipan
Marzipan
Marzipan is a confection consisting primarily of sugar and almond meal. Persipan is a similar, yet less expensive product, in which the almonds are replaced by apricot or peach kernels...
sweets, in the form of fruits and vegetables, from the province of Palermo
Palermo
Palermo is a city in Southern Italy, the capital of both the autonomous region of Sicily and the Province of Palermo. The city is noted for its history, culture, architecture and gastronomy, playing an important role throughout much of its existence; it is over 2,700 years old...
, Sicily
Sicily
Sicily is a region of Italy, and is the largest island in the Mediterranean Sea. Along with the surrounding minor islands, it constitutes an autonomous region of Italy, the Regione Autonoma Siciliana Sicily has a rich and unique culture, especially with regard to the arts, music, literature,...
. 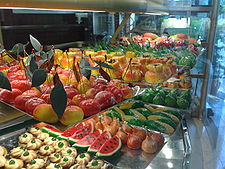 Realistically coloured with vegetable dyes, they are said to have originated at the Monastero della Martorana
Martorana
The Church of Santa Maria dell'Ammiraglio or San Nicolò dei Greci, commonly called the Martorana, overlooking the renowned Piazza Bellini in Palermo, Sicily, southern Italy...
, Palermo, when nuns decorated empty fruit trees with marzipan fruit to impress an archbishop visiting at Easter
Easter
Easter is the central feast in the Christian liturgical year. According to the Canonical gospels, Jesus rose from the dead on the third day after his crucifixion. His resurrection is celebrated on Easter Day or Easter Sunday...
. They are traditionally put by children's bedsides on All Saints Day
All Saints
All Saints' Day , often shortened to All Saints, is a solemnity celebrated on 1 November by parts of Western Christianity, and on the first Sunday after Pentecost in Eastern Christianity, in honour of all the saints, known and unknown...
.