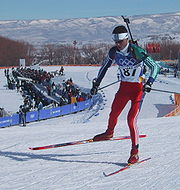 Frode Andresen (born 9 September 1973 in Rotterdam
Rotterdam
Rotterdam is the second-largest city in the Netherlands and one of the largest ports in the world. Starting as a dam on the Rotte river, Rotterdam has grown into a major international commercial centre...
) is a Norwegian
Norway
Norway , officially the Kingdom of Norway, is a Nordic unitary constitutional monarchy whose territory comprises the western portion of the Scandinavian Peninsula, Jan Mayen, and the Arctic archipelago of Svalbard and Bouvet Island. Norway has a total area of and a population of about 4.9 million...
biathlete and a cross-country skier. He now resides in Hønefoss
Hønefoss
Hønefoss is a city in Buskerud county, Norway, and the center of the municipality of Ringerike.In 1852, Hønefoss received town status and was separated from Norderhov. Hønefoss celebrated its 150th year of township in 2002...
, and trains with the Ringkollen Skiklubb.

Andresen was born in the Netherlands
Netherlands
The Netherlands is a constituent country of the Kingdom of the Netherlands, located mainly in North-West Europe and with several islands in the Caribbean. Mainland Netherlands borders the North Sea to the north and west, Belgium to the south, and Germany to the east, and shares maritime borders...
, and lived one year each in Cape Town
Cape Town
Cape Town is the second-most populous city in South Africa, and the provincial capital and primate city of the Western Cape. As the seat of the National Parliament, it is also the legislative capital of the country. It forms part of the City of Cape Town metropolitan municipality...
, South Africa
South Africa
The Republic of South Africa is a country in southern Africa. Located at the southern tip of Africa, it is divided into nine provinces, with of coastline on the Atlantic and Indian oceans...
; Laos
Laos
Laos Lao: ສາທາລະນະລັດ ປະຊາທິປະໄຕ ປະຊາຊົນລາວ Sathalanalat Paxathipatai Paxaxon Lao, officially the Lao People's Democratic Republic, is a landlocked country in Southeast Asia, bordered by Burma and China to the northwest, Vietnam to the east, Cambodia to the south and Thailand to the west...
, Nigeria
Nigeria
Nigeria , officially the Federal Republic of Nigeria, is a federal constitutional republic comprising 36 states and its Federal Capital Territory, Abuja. The country is located in West Africa and shares land borders with the Republic of Benin in the west, Chad and Cameroon in the east, and Niger in...
; and Nairobi
Nairobi
Nairobi is the capital and largest city of Kenya. The city and its surrounding area also forms the Nairobi County. The name "Nairobi" comes from the Maasai phrase Enkare Nyirobi, which translates to "the place of cool waters". However, it is popularly known as the "Green City in the Sun" and is...
, Kenya
Kenya
Kenya , officially known as the Republic of Kenya, is a country in East Africa that lies on the equator, with the Indian Ocean to its south-east...
, because of his parent's careers. They settled in Norway when Frode was four, and a year later he learnt to cross-country ski, taking up biathlon when he was twelve.

Andresen started competing in 1985 and has 15 World cup victories (as of March 9, 2006). In all Andresen has had 47 podium finishes, 15 1st (including three wins at the Holmenkollen ski festival
Holmenkollen ski festival
The Holmenkollen Ski Festival is a traditional annual Nordic skiing event in Holmenkollen, Oslo, Norway. The full official name of the event is Holmenkollen FIS World Cup Nordic. It takes place in March and has been arranged every year since 1892, except for 1898 and during World War II...
biathlon competition with two sprint wins (2000, 2001) and one pursuit (2001), 15 2nd and 17 3rd places. On the January 22, 2006, Frode Andresen won the Golden Cup
Golden Cup
The Golden Cup is one Roller Hockey tournament disputed all years in the city of Blanes, Catalonia. The first edition was in 2004.-Men's:-Women's:-Men's:-Women's:-External Links:***...
, which is a trophy awarded to the biathlete with the most points during the three world cup events after Christmas
Christmas
Christmas or Christmas Day is an annual holiday generally celebrated on December 25 by billions of people around the world. It is a Christian feast that commemorates the birth of Jesus Christ, liturgically closing the Advent season and initiating the season of Christmastide, which lasts twelve days...
. Andresen is one of the fastest skiers in the field, but his shooting accuracy is questionable, his 03/04 season shooting statistics were 72% in the prone, and 67% standing, whilst the top biathletes are in the high 80% range.

On the 14 February 2006 Andresen won the bronze medal in the 10 km sprint in the 2006 Winter Olympics
2006 Winter Olympics
The 2006 Winter Olympics, officially known as the XX Olympic Winter Games, was a winter multi-sport event which was celebrated in Turin, Italy from February 10, 2006, through February 26, 2006. This marked the second time Italy hosted the Olympic Winter Games, the first being the VII Olympic Winter...
in a time of 26:31.3, 19.7 seconds behind winner Sven Fischer
Sven Fischer
Sven Fischer is a former German biathlete. He trained with the WSV Oberhof club, and was coached by Frank Ullrich and Fritz Fischer and Klaus Siebert...
of Germany
Germany
Germany , officially the Federal Republic of Germany , is a federal parliamentary republic in Europe. The country consists of 16 states while the capital and largest city is Berlin. Germany covers an area of 357,021 km2 and has a largely temperate seasonal climate...
, having missed one target out of ten. This gave him a complete set of medals in his olympic career.

Andresen is currently 8th in the IBU World Cup standings, 236 points behind fellow countryman Ole Einar Bjørndalen
Ole Einar Bjørndalen
Ole Einar Bjørndalen is a Norwegian professional biathlete. He is often regarded as one of the greatest athletes of all time. In 1992, he won his first career medal at the junior world championships. A year later In 1993, after winning a record three junior world championship titles, Bjørndalen...
. He is in 36th place in the individual standings, 117 points behind Michael Greis
Michael Greis
Michael Greis is a German triple Olympic gold medalist in biathlon.Greis first competed at the 2002 Winter Olympics in Salt Lake City, finishing 15th and 16th in the 10 km sprint and 12.5 km pursuit events in the biathlon.Greis won the World Cup in the individual category in 2004/05, and...
of Germany. He finished the sprint season in 7th place, 45 points behind Tomasz Sikora
Tomasz Sikora
Tomasz Sikora , is a Polish biathlete.In 1993 he finished second in 10 km sprint at world youth championships in Ruhpolding....
of Poland
Poland
Poland , officially the Republic of Poland , is a country in Central Europe bordered by Germany to the west; the Czech Republic and Slovakia to the south; Ukraine, Belarus and Lithuania to the east; and the Baltic Sea and Kaliningrad Oblast, a Russian exclave, to the north...
. He's sixth in the pursuit, 77 points behind Bjørndalen, and he's 9th in the mass start, 64 points behind Poirée. Norway was fourth in the relay. Biathletes are not awarded points for relays.

A skilled and versatile skier, Andresen also participates in FIS
International Ski Federation
The International Ski Federation, known by its name in French, Fédération Internationale de Ski is the main international organisation for ski sports...
cross-country skiing competitions. One of his best achievements in this sport is the first place in 20 km Freestyle race on 1999 Norwegian national championship which took place in Lillehammer
Lillehammer
is a town and municipality in Oppland county, Norway, globally known for hosting the 1994 Winter Olympics. It is part of the traditional region of Gudbrandsdal. The administrative centre of the municipality is the town of Lillehammer. As of May 2011, the population of the town of Lillehammer was...
.