Encyclopedia
The friend zone, or occasionally friendship zone, is a dating term describing a relation in which one partner wants to become intimate romantically while the other prefers to be just friends. It is generally regarded as not a positive development, particularly for a man. The sense is that once this has happened to a relationship, it's difficult to undo, although there are differing views about whether it's possible to leave the friend zone and how this might be accomplished.

The friend zone can be used to describe somebody with whom you want to spend time but not necessarily pursue sexually. Marshall Fine, of the Huffington Post, suggested that it was "like the penalty box of dating, when your only crime is not being buff and unobtainable."

There are differing explanations about what causes the friend zone to happen. One report suggested that some women don't see their male friends as potential love interests because they fear that deepening their relationship might entail a loss of the romance and mystery as well as enable possible rejection. A Chicago Tribune
Chicago Tribune
The Chicago Tribune is a major daily newspaper based in Chicago, Illinois, and the flagship publication of the Tribune Company. Formerly self-styled as the "World's Greatest Newspaper" , it remains the most read daily newspaper of the Chicago metropolitan area and the Great Lakes region and is...
writer suggested there were several causes in which a man might become corralled to the friend zone: (1) the woman is not sufficiently attracted to the man, (2) the woman perceives signals coming from the man about whether to deepen the relationship as ambiguous, (3) there is sexual repulsion (but not enough to block a friendship). The writer described the relationship in these terms:
Dating adviser Ali Binazir described the friend zone as Justfriendistan
-stan
The suffix -stan is Persian for "place of", a cognate to Pashto -tun and to Indo-Aryan -sthāna , a Sanskrit suffix with a similar meaning...
, and wrote that it's a "territory only to be rivaled in inhospitability by the western Sahara, the Atacama desert, and Dante's Ninth Circle of Hell."

A key is avoiding the friend zone to begin with. One man described himself as always having girlfriends who were "girls" but were only his "friends", meaning there was no sex between them. On the other hand, a report in Cosmopolitan
Cosmopolitan (magazine)
Cosmopolitan is an international magazine for women. It was first published in 1886 in the United States as a family magazine, was later transformed into a literary magazine and eventually became a women's magazine in the late 1960s...
magazine suggested that a friend-only relation could change into a sexual one, and based this finding on a 2001 Match.com
Match.com
Match.com is an online dating company which reportedly has more than 20 million members, made up of a 49/51 male/female ratio, and Web sites serving 25 countries in more than 8 different languages. Its headquarters are in Dallas, Texas and the company also has offices in West Hollywood, Tokyo, Rio,...
survey in which 71% of respondents hoped that they would fall in love with a friend. It has also been suggested that women may also become victims of the "friend zone", that is, in which a man treats them as only a friend, while the woman prefers a more intimate relationship. But it was suggested that it was easier for women to escape the friend zone, and move the relation to an intimate one with sex, than it was for men to escape the zone.

There is general agreement that once a man is in the friend zone, that it is difficult to get out. A platonic relationship has formed without sex and can continue indefinitely. Accordingly, dating advisers and coaches have suggested that one never get in the friend zone to begin with. Several advisers urged men, during the initial dates, to touch women physically in appropriate places such as elbows or shoulders as a means of increasing the sexual tension. Authors of the book How to Succeed with Women explained the logic:
Adviser Ali Binazir agrees, and suggested for the man to be a "little bit dangerous", not in a violent sense, but "with a bit of an edge to them", and be unpredictable and feel "comfortable in their skin as sexual beings." A woman speaking about a previous date in a report in the Boston Globe confirmed that she relegated her date to the friend zone because he lacked an "edge"; she needed "excitement." Binazir suggested that a man, ensnared in the friend zone, is free to experiment and try new things, since there's nothing to lose. 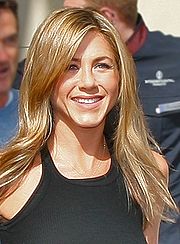 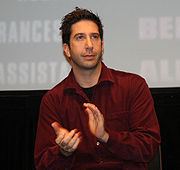 The television show Scrubs
Scrubs (TV series)
Scrubs is an American medical comedy-drama television series created in 2001 by Bill Lawrence and produced by ABC Studios. The show follows the lives of several employees of the fictional Sacred Heart, a teaching hospital. It features fast-paced screenplay, slapstick, and surreal vignettes...
uses the term friend zone on the first season episode of "My Best Friend's Mistake". J.D. explains that once something important, a turning point, occurs between a guy and a girl, they have 48 hours to do something about it or else the guy will be stuck in the girl's "friend zone" forever. J.D. doesn't get to finish kissing Elliot in 48 hours, so he enters an imaginary hospital room called "Friend Zone" with a room full of guys who used to like Elliot, but Elliot didn't like them back in the same way.

The 2005 film Just Friends deals with the "friend zone" and how it impacts on the main character of the film (played by Ryan Reynolds
Ryan Reynolds
Ryan Rodney Reynolds is a Canadian film and television actor, best known for his roles in such films as National Lampoon's Van Wilder, Waiting..., The Amityville Horror, Just Friends, Definitely, Maybe, The Proposal, Buried, X-Men Origins: Wolverine, and Green Lantern.One of his best known...
) when he re-unites with his female friend from high school (played by Amy Smart
Amy Smart
Amy Lysle Smart is an American television and film actress and former fashion model.-Early life:Smart was born in Topanga, California. Her mother, Judy Lysle , worked at a museum, and her father, John Boden Smart, was a salesman...
) for the first time in 10 years after an incident at a high school graduation party at her home in which she said that she loves him "like a brother", dashing any hopes of him having her as a girlfriend. The movie When Harry Met Sally explored the theme of whether men and women could be friends without being lovers.

In May 2011, MTV
MTV
MTV, formerly an initialism of Music Television, is an American network based in New York City that launched on August 1, 1981. The original purpose of the channel was to play music videos guided by on-air hosts known as VJs....
announced a new show entitled "FriendZone", produced by 495 Productions cast by Doron Ofir
Doron Ofir
Doron Ofir is a freelance casting director and president of Doron Ofir Casting, a division of Popular Productions, Inc. Ofir earned a reputation in Hollywood by taking on controversial programs such as MTV's 'A Shot at Love with Tila Tequila' and high profile projects such as MTV's Paris Hilton's...
. Created by Damon Epps and SallyAnn Salsano
SallyAnn Salsano
SallyAnn Salsano is an American television producer. Her company, 495 Productions, produces several television reality shows for MTV, including Jersey Shore.-Biography:...
.

In an interview with a national publication, Mr. Epps is quoted as saying, "The idea for the show came out of my own experience. Unfortunately, I know the pain of telling the girl of your dreams you love them and want to take the relationship to the next level only to be told they don't feel the same. I figured if it happened to me, it might be something others could relate to as well. If it works, you have the beginnings of a great love story. If it doesn't, well, pain and humiliation make great TV, too."
The source of this article is wikipedia, the free encyclopedia.  The text of this article is licensed under the GFDL.