The designations of styles in French Gothic architecture are as follows:


These divisions are effective, but still set grounds for debate. Because the lengthy construction of Gothic cathedrals could span multiple architectural periods, and builders in each period did not always follow wishes of previous periods, dominant architectural style often changes throughout a particular building. Consequently, it is often difficult to declare one building as a member of a certain era of Gothic architecture. It is more useful to use the terms to describe specific elements within a structure, rather than applying them to the building as a whole. 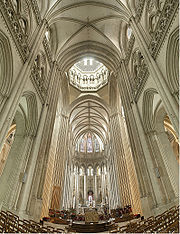 This style began in 1140 and was characterized by the adoption of the pointed arch and transition from late Romanesque architecture
Romanesque architecture
Romanesque architecture is an architectural style of Medieval Europe characterised by semi-circular arches. There is no consensus for the beginning date of the Romanesque architecture, with proposals ranging from the 6th to the 10th century. It developed in the 12th century into the Gothic style,...
. To heighten the wall, builders divided it into four tiers: arcade
Arcade (architecture)
An arcade is a succession of arches, each counterthrusting the next, supported by columns or piers or a covered walk enclosed by a line of such arches on one or both sides. In warmer or wet climates, exterior arcades provide shelter for pedestrians....
(arches and piers), gallery, triforium
Triforium
A triforium is a shallow arched gallery within the thickness of inner wall, which stands above the nave of a church or cathedral. It may occur at the level of the clerestory windows, or it may be located as a separate level below the clerestory. It may itself have an outer wall of glass rather than...
, and clerestorey. To support the higher wall builders invented the flying buttresses, which reached maturity only at High Gothic during the 13th century. The vaults
Vault (architecture)
A Vault is an architectural term for an arched form used to provide a space with a ceiling or roof. The parts of a vault exert lateral thrust that require a counter resistance. When vaults are built underground, the ground gives all the resistance required...
were six ribbed sexpartite vault
Sexpartite vault
Sexpartite vault, in architecture, is a rib vault divided into six bays by two diagonal ribs and three transverse ribs.The principal examples are those in the Abbaye-aux-Hommes and Abbaye-aux-Dames at Caen , Notre Dame de Paris, and the cathedrals of Bourges, Laon, Noyon, Senlis and Sens; from...
s.

This 13th century style canonized proportions and shapes from early Gothic and developed them further to achieve light, yet tall and majestic structures. The wall structure was modified from four to only three tiers: arcade, triforium, and clerestory. Piers coronations were smaller to avoid stopping the visual upward thrust. The clerestorey windows changed from one window in each segment, holed in the wall, to two windows united by a small rose window
Rose window
A Rose window is often used as a generic term applied to a circular window, but is especially used for those found in churches of the Gothic architectural style and being divided into segments by stone mullions and tracery...
. The rib vault
Rib vault
The intersection of two or three barrel vaults produces a rib vault or ribbed vault when they are edged with an armature of piped masonry often carved in decorative patterns; compare groin vault, an older form of vault construction...
changed from six to four ribs. The flying buttresses matured, and after they were embraced at Notre-Dame de Paris and Notre-Dame de Chartres, they became the canonical way to support high walls, as they served both structural and ornamental purposes.

In addition to these Gothic styles, there is another style called "Gothique Méridional" (or Southern Gothic, opposed to Gothique Septentrional or Northern Gothic). This style is characterised by a large nave and has no transept. Examples of this Gothic architecture would be: