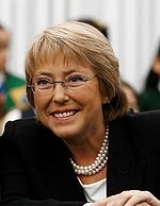 Encyclopedia
A French Chilean is an Chile
Chile
Chile ,officially the Republic of Chile , is a country in South America occupying a long, narrow coastal strip between the Andes mountains to the east and the Pacific Ocean to the west. It borders Peru to the north, Bolivia to the northeast, Argentina to the east, and the Drake Passage in the far...
an citizen of full or partial French
French people
The French are a nation that share a common French culture and speak the French language as a mother tongue. Historically, the French population are descended from peoples of Celtic, Latin and Germanic origin, and are today a mixture of several ethnic groups...
ancestry. Between 1840 and 1940, 20,000 to 25,000 French people immigrated to Chile. The country received the fourth largest number of French immigrants to South America
South America
South America is a continent situated in the Western Hemisphere, mostly in the Southern Hemisphere, with a relatively small portion in the Northern Hemisphere. The continent is also considered a subcontinent of the Americas. It is bordered on the west by the Pacific Ocean and on the north and east...
after Argentina
French Argentine
A French Argentine is an Argentine citizen of full or partial French ancestry. French Argentines form the third or fourth largest ancestry group after Italian Argentines, Spanish Argentines, and perhaps German Argentines...
(239,000), Brazil
French Brazilian
A French Brazilian is a Brazilian citizen of full, partial, or predominantly French ancestry, or a French-born person residing in Brazil. Between 1850 and 1965 around 100,000 French people immigrated to Brazil. The country received the second largest number of French immigrants to South America...
(40,000) and Uruguay
French Uruguayan
A French Uruguayan is an Uruguayan citizen of full or partial French ancestry. French Uruguayan form the third largest ancestry group after Spanish Uruguayans and Italian Uruguayans. Until 1853, France constituted the main source of immigrants to Uruguay...
(more than 25,000).

The French
French people
The French are a nation that share a common French culture and speak the French language as a mother tongue. Historically, the French population are descended from peoples of Celtic, Latin and Germanic origin, and are today a mixture of several ethnic groups...
came to Chile in the 18th century, arriving at Concepción
Concepción, Chile
Concepción is a city in Chile, capital of Concepción Province and of the Biobío Region or Region VIII. Greater Concepción is the second-largest conurbation in the country, with 889,725 inhabitants...
as merchants, and in the mid-19th century to cultivate vines in the haciendas of the Central Valley, the homebase of world-famous Chilean wine
Chilean wine
Chilean wine is wine made in the South American country of Chile. The region has a long viticultural history for a New World wine region dating to the 16th century when the Spanish conquistadors brought Vitis vinifera vines with them as they colonized the region. In the mid-19th century, French...
. The Araucanía Region
Araucanía Region
The IX Araucanía Region is one of Chile's 15 first order administrative divisions and comprises two provinces: Malleco in the north and Cautín in the south....
also has an important number of people of French ancestry, as the area hosted settlers arrived by the second half of the 19th century as farmers and shopkeepers. With akin Latin culture
Latin culture
Latin culture may refer to:*Latin **Latin literature**Classics*Latin Europe**Spanish culture**Portuguese culture**French culture**Italian culture**Romanian culture**Moldovan culture*Latin America**Latin American culture...
, the French immigrants quickly assimilated into mainstream Chilean society.

From 1840 to 1940, around 25,000 Frenchmen immigrated to Chile. 80% of them were coming from Southwestern France, especially from Basses-Pyrénées
Pyrénées-Atlantiques
Pyrénées-Atlantiques is a department in the southwest of France which takes its name from the Pyrenees mountains and the Atlantic Ocean.- History :...
(Basque country
Northern Basque Country
The French Basque Country or Northern Basque Country situated within the western part of the French department of the Pyrénées-Atlantiques constitutes the north-eastern part of the Basque Country....
and Béarn
Béarn
Béarn is one of the traditional provinces of France, located in the Pyrenees mountains and in the plain at their feet, in southwest France. Along with the three Basque provinces of Soule, Lower Navarre, and Labourd, the principality of Bidache, as well as small parts of Gascony, it forms in the...
), Gironde
Gironde
For the Revolutionary party, see Girondists.Gironde is a common name for the Gironde estuary, where the mouths of the Garonne and Dordogne rivers merge, and for a department in the Aquitaine region situated in southwest France.-History:...
, Charente-Inférieure
Charente-Maritime
Charente-Maritime is a department on the west coast of France named after the Charente River.- History :Previously a part of Saintonge, Charente-Inférieure was one of the 83 original departments created during the French Revolution on 4 March 1790...
and Charente
Charente
Charente is a department in southwestern France, in the Poitou-Charentes region, named after the Charente River, the most important river in the department, and also the river beside which the department's two largest towns, Angoulême and Cognac, are sited.-History:Charente is one of the original...
and regions situated between Gers
Gers
The Gers is a department in the Midi-Pyrénées region in the southwest of France named after the Gers River.Inhabitants are called les Gersois or Gersoises.-History:...
and Dordogne
Dordogne
Dordogne is a départment in south-west France. The départment is located in the region of Aquitaine, between the Loire valley and the High Pyrénées named after the great river Dordogne that runs through it...
.

In World War II, a group of over 10,000 Chileans of French descent, the majority have French relatives joined the Free French Forces
Free French Forces
The Free French Forces were French partisans in World War II who decided to continue fighting against the forces of the Axis powers after the surrender of France and subsequent German occupation and, in the case of Vichy France, collaboration with the Germans.-Definition:In many sources, Free...
and fought the Nazi occupation of France
France
The French Republic , The French Republic , The French Republic , (commonly known as France , is a unitary semi-presidential republic in Western Europe with several overseas territories and islands located on other continents and in the Indian, Pacific, and Atlantic oceans. Metropolitan France...
.

Today it is estimated that 500,000 Chileans are of French descent.