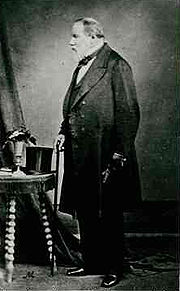 Major-General Frederick Holt Robe CB
Order of the Bath
The Most Honourable Order of the Bath is a British order of chivalry founded by George I on 18 May 1725. The name derives from the elaborate mediæval ceremony for creating a knight, which involved bathing as one of its elements. The knights so created were known as Knights of the Bath...
(1801 – 4 April 1871) was the fourth Governor of South Australia, from 25 October 1845 to 2 August 1848.

Robe entered the Royal Staff Corps
Royal Staff Corps
The Royal Staff Corps was a corps of the British Army which was founded in c.1800 and disbanded in c.1837. It was generally responsible for short-term military engineering works, with the Royal Engineers and Corps of Royal Sappers and Miners remaining responsible for permanent works, but the...
as an ensign
Ensign (rank)
Ensign is a junior rank of a commissioned officer in the armed forces of some countries, normally in the infantry or navy. As the junior officer in an infantry regiment was traditionally the carrier of the ensign flag, the rank itself acquired the name....
in 1817, following his father, Sir William Robe who was a colonel in the Royal Artillery
Royal Artillery
The Royal Regiment of Artillery, commonly referred to as the Royal Artillery , is the artillery arm of the British Army. Despite its name, it comprises a number of regiments.-History:...
. He was promoted first lieutenant
First Lieutenant
First lieutenant is a military rank and, in some forces, an appointment.The rank of lieutenant has different meanings in different military formations , but the majority of cases it is common for it to be sub-divided into a senior and junior rank...
in 1825, transferred to the 84th Foot in 1827, transferred to the 87th Foot as Captain
Captain (British Army and Royal Marines)
Captain is a junior officer rank of the British Army and Royal Marines. It ranks above Lieutenant and below Major and has a NATO ranking code of OF-2. The rank is equivalent to a Lieutenant in the Royal Navy and to a Flight Lieutenant in the Royal Air Force...
in 1833, brevetted major
Major
Major is a rank of commissioned officer, with corresponding ranks existing in almost every military in the world.When used unhyphenated, in conjunction with no other indicator of rank, the term refers to the rank just senior to that of an Army captain and just below the rank of lieutenant colonel. ...
in 1841, and promoted major in 1846. He fought in the Syrian campaign of 1840-1, and was military secretary in Mauritius
Mauritius
Mauritius , officially the Republic of Mauritius is an island nation off the southeast coast of the African continent in the southwest Indian Ocean, about east of Madagascar...
and Gibraltar
Gibraltar
Gibraltar is a British overseas territory located on the southern end of the Iberian Peninsula at the entrance of the Mediterranean. A peninsula with an area of , it has a northern border with Andalusia, Spain. The Rock of Gibraltar is the major landmark of the region...
.

Robe was appointed as Governor of South Australia, being sworn in on 25 October 1845. He was not popular as the governor, as he attempted to carry out his understanding of the British government's requirement to charge royalties
Royalties
Royalties are usage-based payments made by one party to another for the right to ongoing use of an asset, sometimes an intellectual property...
on the mineral wealth of the province. This was rejected by the elected members of the South Australian Legislative Council
South Australian Legislative Council
The Legislative Council, or upper house, is one of the two chambers of the Parliament of South Australia. Its central purpose is to act as a house of review for legislation passed through the lower house, the House of Assembly...
as a breach of faith. There was also trouble over the question of State aid to religion, which Robe favoured, but which was strongly opposed. After requesting to be relieved of the post of governor, he was posted again to Mauritius as deputy quartermaster. He was honourable and confident in his convictions, but too conservative for the fledgling colony of South Australia.

Robe was appointed Companion of the Order of the Bath
Order of the Bath
The Most Honourable Order of the Bath is a British order of chivalry founded by George I on 18 May 1725. The name derives from the elaborate mediæval ceremony for creating a knight, which involved bathing as one of its elements. The knights so created were known as Knights of the Bath...
(CB) in 1848, brevetted lieutenant colonel in 1847, promoted lieutenant colonel in 1853, brevetted colonel
Colonel
Colonel , abbreviated Col or COL, is a military rank of a senior commissioned officer. It or a corresponding rank exists in most armies and in many air forces; the naval equivalent rank is generally "Captain". It is also used in some police forces and other paramilitary rank structures...
in 1854, and promoted major general in 1862. He died on 4 April 1871.