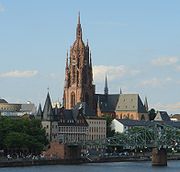 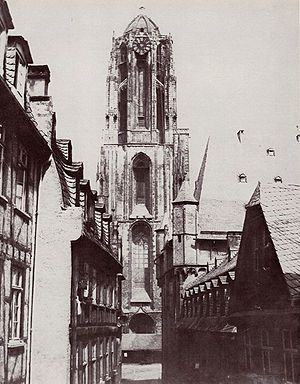 Saint Bartholomeus's
Bartholomew
Bartholomew was one of the Twelve Apostles of Jesus, and is usually identified as Nathaniel . He was introduced to Christ through St. Philip, another of the twelve apostles as per , where the name Nathaniel first appears. He is also mentioned as “Nathaniel of Cana in Galilee” in...
Cathedral (Dom Sankt Bartholomäus) is a Gothic
Gothic architecture
Gothic architecture is a style of architecture that flourished during the high and late medieval period. It evolved from Romanesque architecture and was succeeded by Renaissance architecture....
building located in Frankfurt
Frankfurt
Frankfurt am Main , commonly known simply as Frankfurt, is the largest city in the German state of Hesse and the fifth-largest city in Germany, with a 2010 population of 688,249. The urban area had an estimated population of 2,300,000 in 2010...
, Germany
Germany
Germany , officially the Federal Republic of Germany , is a federal parliamentary republic in Europe. The country consists of 16 states while the capital and largest city is Berlin. Germany covers an area of 357,021 km2 and has a largely temperate seasonal climate...
.

Frankfurt Cathedral is the main church of Frankfurt and was constructed in the 14th and 15th centuries on the foundation of an earlier church from the Merovingian time. From 1356 onwards, emperors of the Holy Roman Empire
Holy Roman Empire
The Holy Roman Empire was a realm that existed from 962 to 1806 in Central Europe.It was ruled by the Holy Roman Emperor. Its character changed during the Middle Ages and the Early Modern period, when the power of the emperor gradually weakened in favour of the princes...
were elected in this collegiate church
Collegiate church
In Christianity, a collegiate church is a church where the daily office of worship is maintained by a college of canons; a non-monastic, or "secular" community of clergy, organised as a self-governing corporate body, which may be presided over by a dean or provost...
as kings in Germany, and from 1562 to 1792, emperors-elect were crowned here. The imperial elections were held in the Wahlkapelle, a chapel on the south side of the choir (Hochchor) built for this purpose in 1425 (See the Plan to the right) and the anointing and crowning of the emperors-elect as kings in Germany took place before the central altar–believed to enshrine part of the head of St. Bartholomew–in the crossing of the church, at the entrance to the choir (See the Plan to the right).

It has been recognized as symbol for the national unity of Germany, especially during the 19th century. Although it has never been a bishop's seat, its was it was the largest church in Frankfurt and its role in imperial politics made the church one of the most important buildings of Imperial history
Holy Roman Empire
The Holy Roman Empire was a realm that existed from 962 to 1806 in Central Europe.It was ruled by the Holy Roman Emperor. Its character changed during the Middle Ages and the Early Modern period, when the power of the emperor gradually weakened in favour of the princes...
and justified the use of the term (imperial) cathedral
Cathedral
A cathedral is a Christian church that contains the seat of a bishop...
for the church since the 18th century.

In 1867, the cathedral was destroyed by a fire and rebuilt in its present style.

Between October 1943 and March 1944 the old town of Frankfurt, the biggest old Gothic town of Central Europe
was destroyed by six bombardments of the Allied Forces. The physical devastation of the old imperial town was intended to reduce public support for the war. The greatest losses occurred on the 22nd of March 1944. Over one thousand buildings of the old town, the most of them being half-timbered houses were destroyed.
The cathedral suffered severe damage and the interior was burned out completely. The cathedral was reconstructed in the 1950s. The height of the cathedral is 95 m.