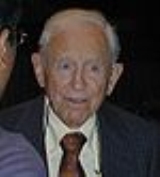 Born in Rome
Rome
Rome is the capital of Italy and the country's largest and most populated city and comune, with over 2.7 million residents in . The city is located in the central-western portion of the Italian Peninsula, on the Tiber River within the Lazio region of Italy.Rome's history spans two and a half...
, Italy
Italy
Italy , officially the Italian Republic languages]] under the European Charter for Regional or Minority Languages. In each of these, Italy's official name is as follows:;;;;;;;;), is a unitary parliamentary republic in South-Central Europe. To the north it borders France, Switzerland, Austria and...
, he left Italy in 1939 because of his Jewish origin and antifascist views. He first went to Paris with the family of his then-girlfriend, Serena, whom he married in 1939, and then to the United States. From 1942 to 1944, he taught at Columbia University
Columbia University
Columbia University in the City of New York is a private, Ivy League university in Manhattan, New York City. Columbia is the oldest institution of higher learning in the state of New York, the fifth oldest in the United States, and one of the country's nine Colonial Colleges founded before the...
and Bard College
Bard College
Bard College, founded in 1860 as "St. Stephen's College", is a small four-year liberal arts college located in Annandale-on-Hudson, New York.-Location:...
as an instructor in economics and statistics. In 1944, he obtained his D. Soc. Sci.
Doctor of Social Science
The Doctorate of Social Science is a higher qualification offered by select universities, which serves as a doctoral level qualification specifically relating to academic work in the field of social sciences....
from the New School for Social Research working under Jacob Marschak
Jacob Marschak
Jacob Marschak was an American economist of Ukrainian Jewish origin.- Life :...
. In 1946, he became a naturalized citizen of the United States
United States
The United States of America is a federal constitutional republic comprising fifty states and a federal district...
, and in 1948, he joined the University of Illinois at Urbana-Champaign
University of Illinois at Urbana-Champaign
The University of Illinois at Urbana–Champaign is a large public research-intensive university in the state of Illinois, United States. It is the flagship campus of the University of Illinois system...
faculty.

In the 1990s he teamed up with Francis Vitagliano to work on a new credit card, and he also helped to oppose changes to a patent law that would be harmful to inventors.