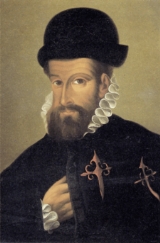 Overview
Francisco Pizarro González, Marquess (fɾanˈθisko̞ piˈθaro̞ go̞nˈθale̞θ; c. 1471 or 1476 – 26 June 1541) was a Spanish conquistador
Conquistador
Conquistadors were Spanish soldiers, explorers, and adventurers who brought much of the Americas under the control of Spain in the 15th to 16th centuries, following Europe's discovery of the New World by Christopher Columbus in 1492...
, conqueror of the Incan Empire, and founder of Lima
Lima
Lima is the capital and the largest city of Peru. It is located in the valleys of the Chillón, Rímac and Lurín rivers, in the central part of the country, on a desert coast overlooking the Pacific Ocean. Together with the seaport of Callao, it forms a contiguous urban area known as the Lima...
, the modern-day capital of the Republic of Peru
Peru
Peru , officially the Republic of Peru , is a country in western South America. It is bordered on the north by Ecuador and Colombia, on the east by Brazil, on the southeast by Bolivia, on the south by Chile, and on the west by the Pacific Ocean....
.
Pizarro was born in the town of Trujillo
Trujillo, Spain
Trujillo is a Spanish city of 9860 inhabitants , located in the province of Cáceres, in the Extremadura region. Famous for its monuments, it is a premier resort in Extremadura. It was the birthplace of Francisco Pizarro and his brothers, conquerors of Peru, as well as of Francisco de Orellana...
, in modern day Extremadura
Extremadura
Extremadura is an autonomous community of western Spain whose capital city is Mérida. Its component provinces are Cáceres and Badajoz. It is bordered by Portugal to the west...
, Spain. Sources differ in the birth year they assign to him: 1471, 1475–1478, or unknown. He was an out-of-wedlock son of Gonzalo Pizarro Rodríguez de Aguilar (senior) (1446–1522) who as colonel
Colonel
Colonel , abbreviated Col or COL, is a military rank of a senior commissioned officer. It or a corresponding rank exists in most armies and in many air forces; the naval equivalent rank is generally "Captain". It is also used in some police forces and other paramilitary rank structures...
of infantry
Infantry
Infantrymen are soldiers who are specifically trained for the role of fighting on foot to engage the enemy face to face and have historically borne the brunt of the casualties of combat in wars. As the oldest branch of combat arms, they are the backbone of armies...
served in the Italian campaigns
Italian Wars
The Italian Wars, often referred to as the Great Italian Wars or the Great Wars of Italy and sometimes as the Habsburg–Valois Wars, were a series of conflicts from 1494 to 1559 that involved, at various times, most of the city-states of Italy, the Papal States, most of the major states of Western...
under Gonzalo Fernández de Córdoba
Gonzalo Fernández de Córdoba
Gonzalo Fernández de Córdoba known as The Great Captain, Duke of Terranova and Santangelo, Andria, Montalto and Sessa, also known as Gonzalo de Córdoba, Italian: Gonsalvo or Consalvo Ernandes di Cordova was a Spanish general fighting in the times of the Conquest of Granada and the Italian Wars...
, and in Navarre
Navarre
Navarre , officially the Chartered Community of Navarre is an autonomous community in northern Spain, bordering the Basque Country, La Rioja, and Aragon in Spain and Aquitaine in France...
, with some distinction.

Was there ever anything names after fransisco pizarro?

What are some important facts about Francisco Pizarro?
More

What was the enterprise that Francisco Pizarro started?

Who were the Famous Thirteen?

How did Pizarro and his brothers get gack at Almagro?
More
x