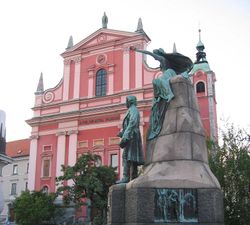 The Franciscan Church of the Annunciation ( or commonly Frančiškanska cerkev) is a Franciscan
Franciscan
Most Franciscans are members of Roman Catholic religious orders founded by Saint Francis of Assisi. Besides Roman Catholic communities, there are also Old Catholic, Anglican, Lutheran, ecumenical and Non-denominational Franciscan communities....
church located on Prešeren Square
Prešeren Square
Prešeren Square is the central square in Ljubljana, the capital of Slovenia. The square and surroundings have been closed to traffic since 1 September 2007. A scale model of the square is exhibited at Mini-Europe in Brussels in a proportion of 1:25 to the original.-Description:Prešeren Square was...
in Ljubljana
Ljubljana
Ljubljana is the capital of Slovenia and its largest city. It is the centre of the City Municipality of Ljubljana. It is located in the centre of the country in the Ljubljana Basin, and is a mid-sized city of some 270,000 inhabitants...
, the capital of Slovenia
Slovenia
Slovenia , officially the Republic of Slovenia , is a country in Central and Southeastern Europe touching the Alps and bordering the Mediterranean. Slovenia borders Italy to the west, Croatia to the south and east, Hungary to the northeast, and Austria to the north, and also has a small portion of...
. It is the parish church of Ljubljana - Annunciation Parish.

Built between 1646 and 1660 (the belltowers following later), it replaced an older church on the same site. The layout takes the form of an early-Baroque basilica with one nave and two rows ol lateral chapels. The Baroque main altar was executed by the sculptor Francesco Robba
Francesco Robba
Francesco Robba was an Italian sculptor of the Baroque period. Even while he is regarded as the leading Baroque sculptor of marble statues in the south-east Central Europe, he has remained practically unknown to the international scholarly public.-Life:Francesco Robba was born in Venice...
. Much of the original frescos were ruined by the cracks in the ceiling caused by the Ljubljana earthquake in 1895. The new frescos were painted by the Slovene impressionist painter Matej Sternen
Matej Sternen
Matej Sternen was a leading Slovene Impressionist painter.Sternen was born in Verd, now part of the Carniolan municipality of Vrhnika, then part of the Austro-Hungarian Empire. He attended the secondary school in Krško and attended technical school in Graz between 1888 and 1891...
.
Next to the church, squeezed between Čop Street
Cop Street
Čop Street is a major thoroughfare in the center of Ljubljana, Slovenia. The street leads from the Main Post Office on Slovenian Street to Prešeren Square and is lined with bars and stores, including the oldest McDonald's restaurant in Slovenia...
, Nazor Street and Prešeren Square
Prešeren Square
Prešeren Square is the central square in Ljubljana, the capital of Slovenia. The square and surroundings have been closed to traffic since 1 September 2007. A scale model of the square is exhibited at Mini-Europe in Brussels in a proportion of 1:25 to the original.-Description:Prešeren Square was...
, there is a Franciscan Monastery dating from the 13th century. The monastery is famous for its library, containing more than 70,000 books, including many incunabulae and medieval manuscript
Manuscript
A manuscript or handwrite is written information that has been manually created by someone or some people, such as a hand-written letter, as opposed to being printed or reproduced some other way...
s. Founded in 1233, the monastery was initially located on Vodnik Square
Vodnik Square
Vodnik Square is a town square in Ljubljana, the capital of Slovenia. It spans the area from the Dragon Bridge across Pogačar Square to the Triple Bridge....
, moving to the present location during the Josephine reforms of the late 17th century.
The source of this article is wikipedia, the free encyclopedia.  The text of this article is licensed under the GFDL.