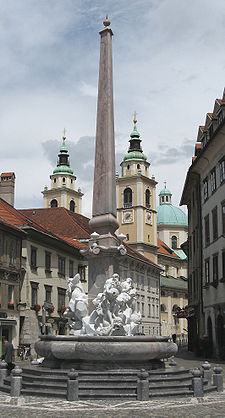 Francesco Robba was an Italian
Italy
Italy , officially the Italian Republic languages]] under the European Charter for Regional or Minority Languages. In each of these, Italy's official name is as follows:;;;;;;;;), is a unitary parliamentary republic in South-Central Europe. To the north it borders France, Switzerland, Austria and...
sculptor
Sculpture
Sculpture is three-dimensional artwork created by shaping or combining hard materials—typically stone such as marble—or metal, glass, or wood. Softer materials can also be used, such as clay, textiles, plastics, polymers and softer metals...
of the Baroque
Baroque
The Baroque is a period and the style that used exaggerated motion and clear, easily interpreted detail to produce drama, tension, exuberance, and grandeur in sculpture, painting, literature, dance, and music...
period. Even while he is regarded as the leading Baroque sculptor of marble
Marble
Marble is a metamorphic rock composed of recrystallized carbonate minerals, most commonly calcite or dolomite.Geologists use the term "marble" to refer to metamorphosed limestone; however stonemasons use the term more broadly to encompass unmetamorphosed limestone.Marble is commonly used for...
statues in the south-east Central Europe
Central Europe
Central Europe or alternatively Middle Europe is a region of the European continent lying between the variously defined areas of Eastern and Western Europe...
, he has remained practically unknown to the international scholarly public.

Francesco Robba was born in Venice
Venice
Venice is a city in northern Italy which is renowned for the beauty of its setting, its architecture and its artworks. It is the capital of the Veneto region...
. He received his training in the workshop of the Venetian sculptor Pietro Baratta
Pietro Baratta
Pietro Baratta was an Italian sculptor of the Baroque period, active in Venice.He was master of the sculptor Francesco Robba.-Biography:...
from 1711 to 1716. In 1720, he moved to Ljubljana to work with the Slovene master Luka Mislej
Luka Mislej
Luka Mislej was a Slovenian sculptor and painter.In 1722 the Italian sculptor Francesco Robba, who took over his atelier after his death, married his daughter Theresa.-Works:...
and married his daughter Theresa in 1722.

In this early period, his first marble statues and reliefs still reflect the influence of Pietro Baratta. When Mislej died in 1727, Robba took over his workshop and his clientele. Soon Robba started to earn his own reputation and was awarded prestigious commissions by ecclesiastical, aristocratic and bourgeois patrons. Already in 1729 his work was praised in a letter to Prince Emmerich Esterházy, Archbishop of Esztergom
Esztergom
Esztergom , is a city in northern Hungary, 46 km north-west of the capital Budapest. It lies in Komárom-Esztergom county, on the right bank of the river Danube, which forms the border with Slovakia there....
by the rector of the Jesuit College in Zagreb
Zagreb
Zagreb is the capital and the largest city of the Republic of Croatia. It is in the northwest of the country, along the Sava river, at the southern slopes of the Medvednica mountain. Zagreb lies at an elevation of approximately above sea level. According to the last official census, Zagreb's city...
, Francesco Saverio Barci.

From 1727 on his works attest of a growing self-confidence. His technical virtuosity manifests itself in the emotional expressions and the refined forms of his statues.

He was recognized by the people of Ljubljana as a "honorary citizen of Ljubljana". In 1743, he was elected to the External Council of the city. In 1745, he was appointed "state engineer" of Carniola
Carniola
Carniola was a historical region that comprised parts of what is now Slovenia. As part of Austria-Hungary, the region was a crown land officially known as the Duchy of Carniola until 1918. In 1849, the region was subdivided into Upper Carniola, Lower Carniola, and Inner Carniola...
. During all this time, he didn't loose contacts with Venice, since he paid several visits to his native city. This allowed him to remain familiar with the Baroque sculpture of central Italy and Rome
Rome
Rome is the capital of Italy and the country's largest and most populated city and comune, with over 2.7 million residents in . The city is located in the central-western portion of the Italian Peninsula, on the Tiber River within the Lazio region of Italy.Rome's history spans two and a half...
.

In 1755 he left Ljubljana for Zagreb
Zagreb
Zagreb is the capital and the largest city of the Republic of Croatia. It is in the northwest of the country, along the Sava river, at the southern slopes of the Medvednica mountain. Zagreb lies at an elevation of approximately above sea level. According to the last official census, Zagreb's city...
, Croatia, where he died on 24 January 1757.

The best-known work by Francesco Robba is the Fountain of the Three Rivers of Carniola
Robba's fountain
The Robba fountain , officially known as the Fountain of the Three Rivers of Carniola , is a fountain in the city of Ljubljana, the capital of Slovenia. It was originally located outside the Ljubljana town hall near the St. Nicholas Cathedral...
(1751), representing Ljubljanica
Ljubljanica
The Ljubljanica is a river in the southern part of Ljubljana Basin in Slovenia. The capital of Slovenia, Ljubljana, is situated on the river. The Ljubljanica rises to the south of the town Vrhnika and outflows in the Sava River about downstream from Ljubljana. Its largest affluent is Mali graben....
, Sava and Krka
Krka (Slovenia)
The Krka is a river in the historic Lower Carniola region of Slovenia, a right tributary of the Sava.It sources at Gradiček near the village of Krka, about southwest of Ivančna Gorica and around southeast of Ljubljana, before flowing southeast...
. It has been inspired by the Bernini's Fountain of the Four Rivers
Fontana dei Quattro Fiumi
The Fontana dei Quattro Fiumi or "Fountain of the Four Rivers" is a fountain in Rome, Italy, located in the urban square of the Piazza Navona...
on Piazza Navona
Piazza Navona
Piazza Navona is a city square in Rome, Italy. It is built on the site of the Stadium of Domitian, built in 1st century AD, and follows the form of the open space of the stadium. The ancient Romans came there to watch the agones , and hence it was known as 'Circus Agonalis'...
during Robba's visit to Rome.

Other works include the Narcissus fountain (Ljubljana), the altar and the statues (1736) in St. James's Church (Ljubljana), an altar in the cathedral of Saint Nicholas (Ljubljana), an altar in the Franciscan Church of the Annunciation
Franciscan Church of the Annunciation
The Franciscan Church of the Annunciation is a Franciscan church located on Prešeren Square in Ljubljana, the capital of Slovenia. It is the parish church of Ljubljana - Annunciation Parish....
(Ljubljana), a statue of St. John Nepomuk in Klagenfurt
Klagenfurt
-Name:Carinthia's eminent linguists Primus Lessiak and Eberhard Kranzmayer assumed that the city's name, which literally translates as "ford of lament" or "ford of complaints", had something to do with the superstitious thought that fateful fairies or demons tend to live around treacherous waters...
(Austria
Austria
Austria , officially the Republic of Austria , is a landlocked country of roughly 8.4 million people in Central Europe. It is bordered by the Czech Republic and Germany to the north, Slovakia and Hungary to the east, Slovenia and Italy to the south, and Switzerland and Liechtenstein to the...
) and an altar in the parish church in Vransko
Vransko
Vransko is a small town and municipality in central Slovenia. It lies on the western edge of the Savinja Valley. This area is part of the traditional region of Lower Styria. The municipality is now part of the Savinja statistical region....
.

The work of Francesco Robba was highlighted in an international scientific symposium, held in Ljubljana in November 1998.
The source of this article is wikipedia, the free encyclopedia.  The text of this article is licensed under the GFDL.