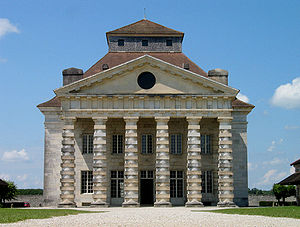 Franche-Comté the former "Free County" of Burgundy
County of Burgundy
The Free County of Burgundy , was a medieval county , within the traditional province and modern French region Franche-Comté, whose very French name is still reminiscent of the unusual title of its count: Freigraf...
, as distinct from the neighbouring Duchy
Duchy of Burgundy
The Duchy of Burgundy , was heir to an ancient and prestigious reputation and a large division of the lands of the Second Kingdom of Burgundy and in its own right was one of the geographically larger ducal territories in the emergence of Early Modern Europe from Medieval Europe.Even in that...
, is an administrative region
Régions of France
France is divided into 27 administrative regions , 22 of which are in Metropolitan France, and five of which are overseas. Corsica is a territorial collectivity , but is considered a region in mainstream usage, and is even shown as such on the INSEE website...
and a traditional province
Provinces of France
The Kingdom of France was organised into provinces until March 4, 1790, when the establishment of the département system superseded provinces. The provinces of France were roughly equivalent to the historic counties of England...
of eastern France. It is composed of the modern departments of Doubs, Jura, :Haute-Saône and Territoire de Belfort
Territoire de Belfort
The Territoire de Belfort is a department in the Franche-Comté region of eastern France.-Administration:Its departmental code is 90, and its prefecture is Belfort...
and has a population of 1,159,000 (2008).

The region has been inhabited since the Paleolithic age and was occupied by the Gauls
Gauls
The Gauls were a Celtic people living in Gaul, the region roughly corresponding to what is now France, Belgium, Switzerland and Northern Italy, from the Iron Age through the Roman period. They mostly spoke the Continental Celtic language called Gaulish....
. Little touched by the Germanic migrations, it was part of the territory of the Alamanni
Alamanni
The Alamanni, Allemanni, or Alemanni were originally an alliance of Germanic tribes located around the upper Rhine river . One of the earliest references to them is the cognomen Alamannicus assumed by Roman Emperor Caracalla, who ruled the Roman Empire from 211 to 217 and claimed thereby to be...
in the 5th century, then the Kingdom of Burgundy
Burgundians
The Burgundians were an East Germanic tribe which may have emigrated from mainland Scandinavia to the island of Bornholm, whose old form in Old Norse still was Burgundarholmr , and from there to mainland Europe...
from 457 to 534. It was Christianized
Christianity
Christianity is a monotheistic religion based on the life and teachings of Jesus as presented in canonical gospels and other New Testament writings...
through the influence of St. Columbanus, who founded several monasteries
Monastery
Monastery denotes the building, or complex of buildings, that houses a room reserved for prayer as well as the domestic quarters and workplace of monastics, whether monks or nuns, and whether living in community or alone .Monasteries may vary greatly in size – a small dwelling accommodating only...
there. In 534, it became part of the Frankish
Franks
The Franks were a confederation of Germanic tribes first attested in the third century AD as living north and east of the Lower Rhine River. From the third to fifth centuries some Franks raided Roman territory while other Franks joined the Roman troops in Gaul. Only the Salian Franks formed a...
kingdom. In 561 it was included in the Merovingian Kingdom of Burgundy, under Guntram
Guntram
Saint Guntram was the king of Burgundy from 561 to 592. He was a son of Chlothar I and Ingunda...
, the third son of Clotaire I
Clotaire I
Chlothar I , called the Old , King of the Franks, was one of the four sons of Clovis. He was born circa 497, in Soissons .-Life:...
. In 613, Clotaire II
Clotaire II
Chlothar II , called the Great or the Young , King of Neustria, and, from 613 to 629, King of all the Franks, was not yet born when his father, King Chilperic I died in 584...
reunited the Frankish Kingdom under his rule, and the region remained a part of the Kingdom of Burgundy under the later Merovingians and Carolingians.

The name Franche-Comté (Free County of Burgundy, or literally "Free County") did not officially appear until 1366. It had been a territory of the County of Burgundy
County of Burgundy
The Free County of Burgundy , was a medieval county , within the traditional province and modern French region Franche-Comté, whose very French name is still reminiscent of the unusual title of its count: Freigraf...
from 888, the province becoming subject to the Holy Roman Empire
Holy Roman Empire
The Holy Roman Empire was a realm that existed from 962 to 1806 in Central Europe.It was ruled by the Holy Roman Emperor. Its character changed during the Middle Ages and the Early Modern period, when the power of the emperor gradually weakened in favour of the princes...
in 1034. It was definitively separated from the neighboring Duchy of Burgundy
Duchy of Burgundy
The Duchy of Burgundy , was heir to an ancient and prestigious reputation and a large division of the lands of the Second Kingdom of Burgundy and in its own right was one of the geographically larger ducal territories in the emergence of Early Modern Europe from Medieval Europe.Even in that...
upon the latter's incorporation into France in 1477. That year at the Battle of Nancy
Battle of Nancy
The Battle of Nancy was the final and decisive battle of the Burgundian Wars, fought outside the walls of Nancy on 5 January 1477 between Charles the Bold, Duke of Burgundy, and René II, Duke of Lorraine...
during the Burgundian Wars
Burgundian Wars
The Burgundian Wars were a conflict between the Dukes of Burgundy and the Kings of France, later involving the Old Swiss Confederacy, which would play a decisive role. Open war broke out in 1474, and in the following years the Duke of Burgundy, Charles the Bold, was defeated three times on the...
, the last duke Charles the Bold was killed in battle. It was transferred to Austria
Austria
Austria , officially the Republic of Austria , is a landlocked country of roughly 8.4 million people in Central Europe. It is bordered by the Czech Republic and Germany to the north, Slovakia and Hungary to the east, Slovenia and Italy to the south, and Switzerland and Liechtenstein to the...
in 1481 and to Spain in 1556. Franche-Comté was captured by France in 1668 but returned under the Treaty of Aix-la-Chapelle
Treaty of Aix-la-Chapelle (1668)
The Treaty of Aix-la-Chapelle or Treaty of Aachen was signed on May 2, 1668 in Aachen. It ended the war of Devolution between France and Spain. It was mediated by the Triple Alliance of England, the Dutch Republic and Sweden at the first Congress of Aix-la-Chapelle...
. It was conquered a second time in 1674, and was finally ceded to France in the Treaty of Nijmegen (1678). Enclaves such as Montbéliard
Montbéliard
Montbéliard is a city in the Doubs department in the Franche-Comté region in eastern France. It is one of the two subprefectures of the department.-History:...
remained outside French control.

Franche-Comté was one of the last parts of France to have serfdom
Serfdom
Serfdom is the status of peasants under feudalism, specifically relating to Manorialism. It was a condition of bondage or modified slavery which developed primarily during the High Middle Ages in Europe and lasted to the mid-19th century...
. In 1784, half the population were serfs, 400,000 out of the 1 million French serfs. Landowners took 1/12 of the sales price if a serf (mainmortable) wanted to sell up. Serfs were not forced to stay on the land, but the lord could claim droit de suite, whereby a peasant who died away from his holding left it to the lord, even if he had heirs. A runaway serf's land was forfeit after ten years. Louis XVI issued a decree banning these practices on 8 August 1779 but the Parlement of Besançon
Parlement of Besançon
The Parlement of Besançon was the Ancien Regime Parlement that dealt with the Franche-Comté. It was created in 1676. The previous Parlement for much of the reason had been at Dôle, and had been created in 1422....
blocked this till 1787.

The region's population fell by a fifth from 1851 to 1946, reflecting low French natural growth and migration to more urbanized parts of the country. Most of the decline occurred in Haute-Saône and Jura, which remain among the country's more agriculture-dependent areas.

This little known region borders Switzerland and shares much of its architecture, cuisine, and culture with its neighbor. Between the Vosges range of mountains to the north and the Jura (Gaulish word meaning 'forest') range to the south, the landscape consists of rolling cultivated fields, dense pine forest and ramparts like mountains. Not as majestic as the Alps, the Jura mountains are more accessible and are France's first cross-country skiing area. It is also a superb place to hike, and there are some fine nature trails on the more gentle slopes. The Doubs and Loue valleys, with their timbered houses perched on stilts in the river, and the high valley of Ain, are popular visitor areas. The Région des Lacs is a land of gorges and waterfalls dotted with tiny villages, each with a domed belfry decorated with mosaic of tiles or slates or beaten from metal. The lakes are perfect for swimming in the warmer months. The summits of Haute Jura have wonderful views across Lac Léman (Lake Geneva) and towards the Alps.

Forty percent of the région's GDP is dependent on manufacturing activities, and most of its production is exported. Construction of automobiles and their parts is one of the most buoyant industries here. Forestry exploitation is steadily growing, and 38% of the agriculture is dairy and 17% cattle farming. The région has a large and lucrative cheese-making industry, with 40 million tons of cheese produced here each year, much of which is made by fruitières (traditional cheese dairies of Franche-Comté).

Among the regional language
Regional language
A regional language is a language spoken in an area of a nation state, whether it be a small area, a federal state or province, or some wider area....
s of France the term Franc-Comtois refers to two dialects of two different languages. Franc-Comtois is the name of both the dialect of Langue d'Oïl spoken by people in the northern part of the region and the dialect of Arpitan
Franco-Provençal language
Franco-Provençal , Arpitan, or Romand is a Romance language with several distinct dialects that form a linguistic sub-group separate from Langue d'Oïl and Langue d'Oc. The name Franco-Provençal was given to the language by G.I...
spoken in its southern part since as early as the 13th century (the southern two-thirds of Jura and the southern third of Doubs). Both are recognized as languages of France.