Encyclopedia
Foxstone Park is a 14.42 acres (58,355.7 m²) park
Park
A park is a protected area, in its natural or semi-natural state, or planted, and set aside for human recreation and enjoyment, or for the protection of wildlife or natural habitats. It may consist of rocks, soil, water, flora and fauna and grass areas. Many parks are legally protected by...
located at 1910 Creek Crossing Road in Vienna
Vienna, Virginia
Vienna is a town in Fairfax County, Virginia, United States. As of the 2010 United States Census, it had a population of 15,687. Significantly more people live in zip codes with the Vienna postal addresses bordered approximately by Interstate 66 on the south, Interstate 495 on the east, Route 7 to...
, Fairfax County
Fairfax County, Virginia
Fairfax County is a county in Virginia, in the United States. Per the 2010 Census, the population of the county is 1,081,726, making it the most populous jurisdiction in the Commonwealth of Virginia, with 13.5% of Virginia's population...
, Virginia
Virginia
The Commonwealth of Virginia , is a U.S. state on the Atlantic Coast of the Southern United States. Virginia is nicknamed the "Old Dominion" and sometimes the "Mother of Presidents" after the eight U.S. presidents born there...
, USA
United States
The United States of America is a federal constitutional republic comprising fifty states and a federal district...
and run by the Fairfax County Park Authority
Fairfax County Park Authority
The Fairfax County Park Authority is a department of the Fairfax County, Virginia county government responsible for developing and maintaining the various parks, historical sites, and recreational areas owned or administered by Fairfax County...
. Robert Hanssen
Robert Hanssen
Robert Philip Hanssen is a former American FBI agent who spied for Soviet and Russian intelligence services against the United States for 22 years from 1979 to 2001...
, who was convicted of spying for the Soviet Union
Soviet Union
The Soviet Union , officially the Union of Soviet Socialist Republics , was a constitutionally socialist state that existed in Eurasia between 1922 and 1991....
and Russia
Russia
Russia or , officially known as both Russia and the Russian Federation , is a country in northern Eurasia. It is a federal semi-presidential republic, comprising 83 federal subjects...
, conducted dead drops there. 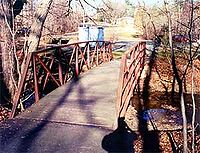