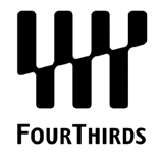 The system provides a standard
Standardization
Standardization is the process of developing and implementing technical standards.The goals of standardization can be to help with independence of single suppliers , compatibility, interoperability, safety, repeatability, or quality....
that, with digital camera
Digital camera
A digital camera is a camera that takes video or still photographs, or both, digitally by recording images via an electronic image sensor. It is the main device used in the field of digital photography...
s and lenses
Lenses for SLR and DSLR cameras
This article is about photographic lenses for single-lens reflex film cameras and digital single-lens reflex cameras .Furthermore, the emphasis is on modern lenses for 35 mm film SLRs and for DSLRs with sensor sizes less than or equal to 35 mm .-Interchangeable lenses:The major advantage...
available from multiple manufacturers, allows for the interchange of lenses and bodies from different manufacturers. seems to cover the standard. Proponents describe it as an open standard
Open standard
An open standard is a standard that is publicly available and has various rights to use associated with it, and may also have various properties of how it was designed . There is no single definition and interpretations vary with usage....
, but companies may only use it under a non-disclosure agreement.

Unlike older SLR systems, Four Thirds has been designed from the ground up to be entirely digital. Many lenses are extensively computerized, to the point that Olympus offers firmware
Firmware
In electronic systems and computing, firmware is a term often used to denote the fixed, usually rather small, programs and/or data structures that internally control various electronic devices...
updates for many of them. Lens design has been tailored to the requirements of digital sensors, most notably through telecentric
Telecentric lens
A telecentric lens is a compound lens which has its entrance or exit pupil at infinity; in the prior case, this produces an orthographic view of the subject. This means that the chief rays are parallel to the optical axis in front of or behind the system, respectively...
designs. The size of the sensor is significantly smaller than for most DSLRs and this implies that lenses, especially telephoto lenses, can be smaller. For example, a Four Thirds lens with a 300 mm focal length
Focal length
The focal length of an optical system is a measure of how strongly the system converges or diverges light. For an optical system in air, it is the distance over which initially collimated rays are brought to a focus...
would cover about the same angle of view as a 600 mm focal length lens for the 35 mm film
135 film
The term 135 was introduced by Kodak in 1934 as a designation for cartridge film wide, specifically for still photography. It quickly grew in popularity, surpassing 120 film by the late 1960s to become the most popular photographic film format...
standard, and is correspondingly more compact. However, with the smaller sensor The Four Thirds System has crop factor
Crop factor
In digital photography, a crop factor is related to the ratio of the dimensions of a camera's imaging area compared to a reference format; most often, this term is applied to digital cameras, relative to 35 mm film format as a reference. In the case of digital cameras, the imaging device would be a...
(focal length multiplier) of about 2, and while this enables longer focal length for greater magnification, it doesn't aid the manufacture of wide angle lenses. The smaller sensor area puts it at a disadvantage against other DSLRs, especially for low light photography, and also for image quality in general. The Four Thirds system does, however, give a marked improvement over compact point and shoot digital cameras in these areas. 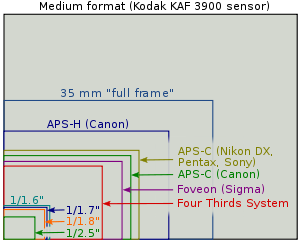 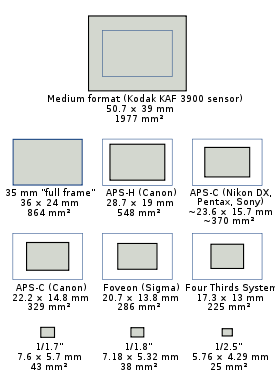 The name of the system stems from the size of the image sensor used in the cameras, which is commonly referred to as a 4/3" type or 4/3 type sensor. The common inch-based sizing system is derived from vacuum image-sensing video camera tube
Video camera tube
In older video cameras, before the mid to late 1980s, a video camera tube or pickup tube was used instead of a charge-coupled device for converting an optical image into an electrical signal. Several types were in use from the 1930s to the 1980s...
s, which are now obsolete. The imaging area of a Four Thirds sensor is equal to that of a video camera tube of 4/3" diameter.
The usual size of the sensor
Image sensor format
In digital photography, the image sensor format is the shape and size of the image sensor.The image sensor format of a digital camera determines the angle of view of a particular lens when used with a particular camera...
is 18×13.5 mm (22.5 mm diagonal), with an imaging area of 17.3×13.0 mm (21.63 mm diagonal). The sensor's area is about 30–40% smaller than the APS-C
APS-C
Advanced Photo System type-C is an image sensor format approximately equivalent in size to the Advanced Photo System "classic" size negatives...
sensors used in most other DSLRs, but still around 9 times larger than the 1/2.5" sensors typically used in compact digital cameras. Incidentally, the imaging area of a Four Thirds sensor is almost identical to that of 110 film
110 film
110 is a cartridge-based film format used in still photography. It was introduced by Kodak in 1972. 110 is a miniaturised version of Kodak's earlier 126 film format. Each frame is , with one registration hole....
.

The emphasis on the 4:3 image aspect ratio
Aspect ratio (image)
The aspect ratio of an image is the ratio of the width of the image to its height, expressed as two numbers separated by a colon. That is, for an x:y aspect ratio, no matter how big or small the image is, if the width is divided into x units of equal length and the height is measured using this...
sets Four Thirds apart from other DSLR systems, which usually adhere to the 3:2 aspect ratio of the traditional 35 mm
135 film
The term 135 was introduced by Kodak in 1934 as a designation for cartridge film wide, specifically for still photography. It quickly grew in popularity, surpassing 120 film by the late 1960s to become the most popular photographic film format...
format. However, the standard only specifies the sensor diagonal, thus Four Thirds cameras using the standard 3:2 aspect ratio would be possible; notably newer Panasonic Micro Four Thirds models even offer shooting at multiple aspect ratios while maintaining the same image diagonal. For instance, the Panasonic GH1 uses a multi-aspect sensor designed to maximize use of the image circle
Image circle
The image circle, or circle of illumination, of a lens is the circular area in the image plane formed by the cone of light transmitted by the lens . Within this circle is the smaller circle for which image definition is acceptable, the circle of good definition ; however, some authors make no...
at 4:3, 3:2, and 16:9; each ratio having a diagonal of 22.5mm.

Sensor aspect ratio has an impact on lens design. For example, many lenses designed by Olympus for the Four Thirds system contain internal rectangular baffles or permanently mounted "petal" lens hood
Lens hood
In photography, a lens hood or lens shade is a device used on the end of a lens to block the sun or other light source in order to prevent glare and lens flare....
s that optimise their operation for the 4:3 aspect ratio.

In an interview John Knaur, a Senior Product Manager at Olympus, stated that "The FourThirds refers to both the size of the imager and the aspect ratio of the sensor". He also pointed out the similarities between 4:3 and the standard printing size of 8×10 as well as medium format 6×4.5 and 6×7 cameras, thus explaining Olympus' rationale on choosing 4:3 rather than 3:2.


Advantages, disadvantages and other considerations 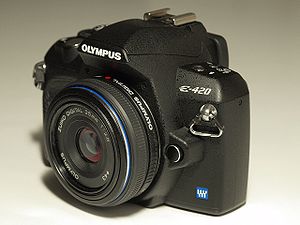 
This does not imply a commitment to end user products by each company. Currently only Leica, Olympus, and Panasonic have bodies. Olympus and Leica/Panasonic make dedicated Four Thirds lenses, and Sigma makes adapted versions of their "DC" lenses for APS-C format DSLRs. Kodak once sold sensors to Olympus for use in their Four Thirds bodies, but the newer Olympus Four Thirds cameras use Panasonic sensors.

The majority of Four Thirds system cameras (and Four Thirds lenses) are made by Olympus. Many Four Thirds cameras use "sensor-shift" in-body image stabilization
Image stabilization
Image stabilization is a family of techniques used to reduce blurring associated with the motion of a camera during exposure. Specifically, it compensates for pan and tilt of a camera or other imaging device. It is used in image-stabilized binoculars, still and video cameras, and astronomical...
, making the need for image stabilization technology in its lenses unnecessary. All Four Thirds cameras also incorporate an automatic sensor cleaning device, in which a thin glass filter in front of the sensor vibrates at 30 kHz causing dust to fall off and adhere to a piece of sticky material below. Olympus' E-system camera bodies are noted for their inclusion of a wide range of firmware-level features and customization, good JPEG engine, and compact size. Because of the smaller format of Four Thirds, the viewfinders tend to be smaller than on comparable cameras.

The Four Thirds lens mount
Lens mount
A lens mount is an interface — mechanical and often also electrical — between a photographic camera body and a lens. It is confined to cameras where the body allows interchangeable lenses, most usually the single lens reflex type or any movie camera of 16 mm or higher gauge...
is specified to be a bayonet
Bayonet mount
A bayonet mount or bayonet connector is a fastening mechanism consisting of a male side with one or more pins, and a female receptor with matching L slots and spring to keep the two parts locked together....
type with a flange focal distance
Flange focal distance
For an interchangeable lens camera, the flange focal distance of a lens mount system is the distance from the mounting flange to the...
of 38.67 mm.

There are currently around three dozen lenses for the Four Thirds system standard.

An official list of available lenses can be found on Four-Thirds.org web site.

The new system uses the same sensor, but removes the mirror box from the camera design. A live view preview is shown on either the camera's main LCD or via an electronic viewfinder
Electronic viewfinder
An electronic viewfinder or EVF is a viewfinder where the image captured by the lens is projected electronically onto a miniature display. The image on this display is used to assist in aiming the camera at the scene to be photographed.-Operation:...
, as in digital compact cameras. Autofocus is accomplished via a contrast-detect process using the main imager, again similar to digital compact cameras. The goal of the new system is to allow for even smaller cameras, competing directly with higher-end point-and-shoot compact digital cameras and lower-end DSLRs. The smaller flange focal distance
Flange focal distance
For an interchangeable lens camera, the flange focal distance of a lens mount system is the distance from the mounting flange to the...
allows for more compact normal and wideangle lenses.