Encyclopedia
An electronic viewfinder or EVF is a viewfinder
Viewfinder
In photography, a viewfinder is what the photographer looks through to compose, and in many cases to focus, the picture. Most viewfinders are separate, and suffer parallax, while the single-lens reflex camera lets the viewfinder use the main optical system. Viewfinders are used in many cameras of...
where the image captured by the lens is projected electronically onto a miniature display. The image on this display is used to assist in aiming the camera at the scene to be photographed.

The sensor records the view through the lens, the view is processed, and finally projected on a miniature display which is viewable through the eyepiece
Eyepiece
An eyepiece, or ocular lens, is a type of lens that is attached to a variety of optical devices such as telescopes and microscopes. It is so named because it is usually the lens that is closest to the eye when someone looks through the device. The objective lens or mirror collects light and brings...
. Electronic viewfinders in digital still camera
Still camera
A still camera is a type of camera used to take photographs. Traditional cameras capture light onto photographic film. Digital cameras use electronics, usually a charge coupled device to store digital images in computer memory inside the camera...
s are very similar to those in video camera
Video camera
A video camera is a camera used for electronic motion picture acquisition, initially developed by the television industry but now common in other applications as well. The earliest video cameras were those of John Logie Baird, based on the electromechanical Nipkow disk and used by the BBC in...
s. 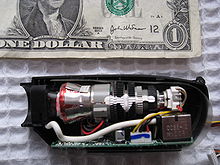 Electronic viewfinders have the following advantages over optical viewfinders:

Electronic viewfinders have the following limitations (2007):

Electronic viewfinders have been in use with bridge cameras for some years, and later entered the field of compact cameras (with the Ricoh
Ricoh
or Ricoh, is a Japanese company that was established in 1936 on February 6th, as , a company in the RIKEN zaibatsu. Its headquarters is located in Ricoh Building in Chūō, Tokyo....
GX100) and of cameras such as the micro four thirds camera Panasonic
Panasonic
Panasonic is an international brand name for Japanese electric products manufacturer Panasonic Corporation, which was formerly known as Matsushita Electric Industrial Co., Ltd...
DMC-G1 or the newer Nikon 1
Nikon 1 series
The Nikon 1 series are high-speed mirrorless interchangeable-lens cameras. Announced on 21 September 2011, Nikon claims that it is "Nikon's most significant announcement since we introduced our first digital camera 14 years ago"...
V1
Nikon 1 V1
The Nikon 1 V1 is a Nikon 1 series mirrorless interchangeable-lens camera launched by Nikon on 21 September 2011....
, which are not actually DSLR, but have interchangeable lenses, and electronic viewfinder in place of an optical one.