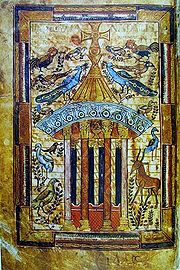 The Fountain of Life, or in its earlier form the Fountain of Living Waters, is a Christian iconography
Iconography
Iconography is the branch of art history which studies the identification, description, and the interpretation of the content of images. The word iconography literally means "image writing", and comes from the Greek "image" and "to write". A secondary meaning is the painting of icons in the...
symbol associated with baptism
Baptism
In Christianity, baptism is for the majority the rite of admission , almost invariably with the use of water, into the Christian Church generally and also membership of a particular church tradition...
, first appearing in the 5th century in illuminated manuscripts and later in other art forms such as panel painting
Panel painting
A panel painting is a painting made on a flat panel made of wood, either a single piece, or a number of pieces joined together. Until canvas became the more popular support medium in the 16th century, it was the normal form of support for a painting not on a wall or vellum, which was used for...
s.

The symbol is usually shown as a fountain enclosed in a hexagonal structure capped by a rounded dome and supported by eight columns. The fountain of living waters, fons vivus is a baptismal font
Baptismal font
A baptismal font is an article of church furniture or a fixture used for the baptism of children and adults.-Aspersion and affusion fonts:...
(a water fountain in which one is baptized, and thus reborn with Christ), and is often surrounded by animals associated with Baptism such as the hart
Deer
Deer are the ruminant mammals forming the family Cervidae. Species in the Cervidae family include white-tailed deer, elk, moose, red deer, reindeer, fallow deer, roe deer and chital. Male deer of all species and female reindeer grow and shed new antlers each year...
. The font probably represents the octagonal Lateran
Lateran
Lateran and Laterano are the shared names of several architectural projects throughout Rome. The properties were once owned by the Lateranus family of the former Roman Empire...
Baptistery
Baptistery
In Christian architecture the baptistry or baptistery is the separate centrally-planned structure surrounding the baptismal font. The baptistry may be incorporated within the body of a church or cathedral and be provided with an altar as a chapel...
in Rome
Rome
Rome is the capital of Italy and the country's largest and most populated city and comune, with over 2.7 million residents in . The city is located in the central-western portion of the Italian Peninsula, on the Tiber River within the Lazio region of Italy.Rome's history spans two and a half...
, consecrated by Pope Sixtus III (432-440), which was iconographically associated with the fountain of the water of life mentioned in Revelation
Revelation
In religion and theology, revelation is the revealing or disclosing, through active or passive communication with a supernatural or a divine entity...
21.6.

The best examples date from the Carolingian
Carolingian
The Carolingian dynasty was a Frankish noble family with origins in the Arnulfing and Pippinid clans of the 7th century AD. The name "Carolingian", Medieval Latin karolingi, an altered form of an unattested Old High German *karling, kerling The Carolingian dynasty (known variously as the...
period: the Godescalc Evangelistary
Godescalc Evangelistary
The Godescalc Evangelistary or Godescalc Gospel Lectionary is an illuminated manuscript Gospel Book made by the Frankish scribe Godescalc circa 781 - 783 C.E...
made to commemorate the Baptism of the son of Charlemagne
Charlemagne
Charlemagne was King of the Franks from 768 and Emperor of the Romans from 800 to his death in 814. He expanded the Frankish kingdom into an empire that incorporated much of Western and Central Europe. During his reign, he conquered Italy and was crowned by Pope Leo III on 25 December 800...
in 781
781
Year 781 was a common year starting on Monday of the Julian calendar. The denomination 781 for this year has been used since the early medieval period, when the Anno Domini calendar era became the prevalent method in Europe for naming years.- Asia :* July 31 – The oldest recorded eruption...
, and in the Soissons Gospels.

In the Ghent Altarpiece
Ghent Altarpiece
The Ghent Altarpiece or Adoration of the Mystic Lamb is a very large and complex Early Netherlandish polyptych panel painting which is considered to be one of Belgium's masterpieces and one of the world's treasures.It was once in the Joost Vijdt chapel at Saint Bavo Cathedral, Ghent, Belgium, but...
: The Adoration of the Lamb by Jan Van Eyck
Jan van Eyck
Jan van Eyck was a Flemish painter active in Bruges and considered one of the best Northern European painters of the 15th century....
(1438), the Lamb of God
Lamb of God
The title Lamb of God appears in the Gospel of John, with the exclamation of John the Baptist: "Behold the Lamb of God who takes away the sin of the world" in John 1:29 when he sees Jesus....
stands upon an altar dressed as for the Mass of the Precious Blood, with a blood-red frontal: the Lamb's blood is caught in a chalice, and its Eucharistic intention is signaled by the dove of the Holy Spirit above. In the foreground, offering the other means of grace, is the Fountain of the Living Water surrounded by the faithful. In the Prado, Madrid, is the Fountain of Living Water emanating from the Lamb of God, in which the open fountain is set into the outer wall of Heaven. That the water is not merely the purifying water of baptism is shown by the innumerable wafers that float upon its surface: the two sacraments are represented as one.

In a miniature in a Book of Hours
Book of Hours
The book of hours was a devotional book popular in the later Middle Ages. It is the most common type of surviving medieval illuminated manuscript. Like every manuscript, each manuscript book of hours is unique in one way or another, but most contain a similar collection of texts, prayers and...
, probably painted at Ghent at the end of the fifteenth century, the Fountain of Living Water has given way to a fountain of blood, the Fountain of Life. in which the figure of Christ stands upon a Gothic pedestal at the center and fills the fountain from his wounds, though the aureole that surrounds him identifies him as the transfigured Christ and the location as Paradise
Paradise
Paradise is a place in which existence is positive, harmonious and timeless. It is conceptually a counter-image of the miseries of human civilization, and in paradise there is only peace, prosperity, and happiness. Paradise is a place of contentment, but it is not necessarily a land of luxury and...
.

In Flanders at the close of the Middle Ages an intense devotion to the Precious Blood of Christ gave rise to an iconographic tradition of the fifteenth and sixteenth centuries, which rendered the theological concept of Grace
Actual grace
Actual grace is, in Roman Catholic theology, a share in God's life. It is contrasted with sanctifying grace, which is a state of being that can be permanent, in that it consists only in a passing influence of God on the soul....
, expressing Roman Catholic dogma allegorically
Allegory
Allegory is a demonstrative form of representation explaining meaning other than the words that are spoken. Allegory communicates its message by means of symbolic figures, actions or symbolic representation...
as a fountain of blood. This transformation was first addressed in Evelyn Underhill
Evelyn Underhill
Evelyn Underhill was an English Anglo-Catholic writer and pacifist known for her numerous works on religion and spiritual practice, in particular Christian mysticism....
in 1910, taking her point of departure an Assembly of Saints and the Fountain of Life of 1596 in Ghent
Ghent
Ghent is a city and a municipality located in the Flemish region of Belgium. It is the capital and biggest city of the East Flanders province. The city started as a settlement at the confluence of the Rivers Scheldt and Lys and in the Middle Ages became one of the largest and richest cities of...
, in which blood from the five Holy Wounds
Holy Wounds
The Five Holy Wounds or Five Sacred Wounds refer to what are believed to be the five piercing wounds that was suffered during the crucifixion of Jesus....
of Christ into the upper basin of a "Fountain of Life" and streams out through openings in the lower "Fountain of Mercy". Saints and martyrs, patriarchs and prophets hold golden chalices of blood, which some empty into the fountain. Below the faithful hold out their hearts to receive droplets of blood.
It is said that over a hundred year period that on who has drunken form the fountain of youth will feel miserable and try to die. It is possible to get cured from the fountain of youth. Where the fountain lies there is a place on the opposite side of the planet, and in this place there is another fountain. the fountain of death, but it is also commonly mistaken for the fountain of youth.
The source of this article is wikipedia, the free encyclopedia.  The text of this article is licensed under the GFDL.