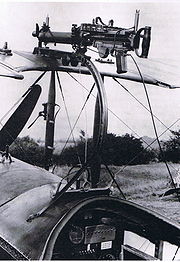 In early 1916
1916 in aviation
This is a list of aviation-related events from 1916:- Events :* Imperial Japanese Navy aircraft simulate night torpedo attacks for the first time against Japanese fleet units in Tateyama Bay during annual fleet maneuvers, although no torpedoes are dropped....
Sergeant Foster of No. 11 Squadron RFC
No. XI Squadron RAF
No. 11 or XI Squadron is a Royal Air Force fighter squadron. The squadron operated the Tornado F3 until 2005 when it was disbanded. It was reactivated in 2006 to operate the Typhoon F2, receiving its first aircraft on 9 October 2006....
devised a sliding rail mounting for the upper wing Lewis Gun
Lewis Gun
The Lewis Gun is a World War I–era light machine gun of American design that was perfected and widely used by the British Empire. It was first used in combat in World War I, and continued in service with a number of armed forces through to the end of the Korean War...
on a Nieuport 11
Nieuport 11
|-See also:-References:NotesBibliography* Angelucci, Enzio, ed. The Rand McNally Encyclopedia of Military Aircraft. New York: The Military Press, 1983. ISBN 0-517-41021-4....
. It enabled the gun to be pulled down so that its breech was conveniently in front of the pilot, making it much easier to change ammunition drums or to clear stoppages in flight. The mounting was readily adaptable to several other types of biplane
Biplane
A biplane is a fixed-wing aircraft with two superimposed main wings. The Wright brothers' Wright Flyer used a biplane design, as did most aircraft in the early years of aviation. While a biplane wing structure has a structural advantage, it produces more drag than a similar monoplane wing...
fighter aircraft
Fighter aircraft
A fighter aircraft is a military aircraft designed primarily for air-to-air combat with other aircraft, as opposed to a bomber, which is designed primarily to attack ground targets...
, including in particular the Nieuport 17
Nieuport 17
|-Specifications :-See also:-Bibliography:* Bruce, Jack. "Those Classic Nieuports". Air Enthusiast Quarterly. Number Two, 1976. Bromley, UK:Pilot Press. pp. 137–153....
and 24 (in British service) and the S.E.5a
Royal Aircraft Factory S.E.5
The Royal Aircraft Factory S.E.5 was a British biplane fighter aircraft of the First World War. Although the first examples reached the Western Front before the Sopwith Camel and it had a much better overall performance, problems with its Hispano-Suiza engine, particularly the geared-output H-S...
, and became a standard fitting for these aircraft and others.

Although possibly not part of the original intention the mounting allowed the Lewis gun to fire forwards and upwards, rather than straight ahead, to attack an enemy aircraft from behind and below, a favourite tactic of the ace Albert Ball
Albert Ball
Albert Ball VC, DSO & Two Bars, MC was an English fighter pilot of the First World War and a recipient of the Victoria Cross, the highest decoration for gallantry "in the face of the enemy" that can be awarded to members of the British or Commonwealth armed forces...
and a precursor of the Schräge Musik
Schräge Musik
Schräge Musik, derived from the German colloquialism for "Jazz Music" was the name given to installations of upward-firing autocannon mounted in night fighters by the Luftwaffe and Imperial Japanese Navy Air Service during World War II, with the first victories for each occurring in May 1943...
tactics used by German night fighter
Night fighter
A night fighter is a fighter aircraft adapted for use at night or in other times of bad visibility...
s in the Second World War
World War II
World War II, or the Second World War , was a global conflict lasting from 1939 to 1945, involving most of the world's nations—including all of the great powers—eventually forming two opposing military alliances: the Allies and the Axis...
. When fired directly forwards, the trigger of the Lewis Gun was controlled by a Bowden cable
Bowden cable
A Bowden cable is a type of flexible cable used to transmit mechanical force or energy by the movement of an inner cable relative to a hollow outer cable housing...
; when fired upwards the pistol grip was held to steady the weapon, and it was fired by pressing the trigger.

Twin Foster mountings were occasionally used, although the recoil and vibration of two Lewis guns firing simultaneously was considered a dangerous strain for the lightly braced centre section of the aircraft of the time.

As the gun's line of fire was outside the propeller
Propeller
A propeller is a type of fan that transmits power by converting rotational motion into thrust. A pressure difference is produced between the forward and rear surfaces of the airfoil-shaped blade, and a fluid is accelerated behind the blade. Propeller dynamics can be modeled by both Bernoulli's...
arc, Foster-mounted guns did not require synchronising
Interrupter gear
An interrupter gear is a device used on military aircraft and warships in order to allow them to target opponents without damaging themselves....
gear. The mounting could only be fitted to types with a suitable configuration, and was a little less stable and more subject to vibration than a mounting in the fuselage, resulting in a more widely spread pattern of fire.

The illustration shows a Foster mounting adapted to the Avro 504
Avro 504
The Avro 504 was a World War I biplane aircraft made by the Avro aircraft company and under licence by others. Production during the War totalled 8,970 and continued for almost 20 years, making it the most-produced aircraft of any kind that served in World War I, in any military capacity, during...
K night fighter. This aircraft had a much larger gap between the top of the fuselage and the upper wing than most types fitted with this type of mounting—in an S.E.5a for instance the gun was much more easily reached, and the mounting shorter and neater.
The source of this article is wikipedia, the free encyclopedia.  The text of this article is licensed under the GFDL.