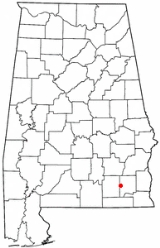 The main post has entrances from three bordering cities, Daleville
Daleville, Alabama
Daleville is a city in Dale County, Alabama, United States. At the 2000 census the population was 4,653. It is part of the Enterprise–Ozark Micropolitan Statistical Area. The city's nickname is "Gateway to Fort Rucker", as this U.S. Army post is located just north of town...
, Ozark
Ozark, Alabama
Ozark is a city in and the county seat of Dale County, Alabama, United States. In 1990 the city population was 12,922. As of the 2000 census, the population of the city was 15,119....
and Enterprise
Enterprise, Alabama
Enterprise is a city in the southeastern part of Coffee and Dale Counties in the southeastern part of Alabama in the Southern United States. The population was estimated to be 25,909 in the year 2009....
. In the years before the September 11, 2001 attacks
September 11, 2001 attacks
The September 11 attacks The September 11 attacks The September 11 attacks (also referred to as September 11, September 11th or 9/119/11 is pronounced "nine eleven". The slash is not part of the pronunciation...
, the main post (except airfields and other restricted areas) was an open post with unmanned gates allowing civilians to drive through. Following the attacks, this policy was changed, and the post is now closed to unauthorized traffic and visitors.

The U.S. Army Aviation Center of Excellence is the dominant military facility at Fort Rucker. Training, doctrine
Doctrine
Doctrine is a codification of beliefs or a body of teachings or instructions, taught principles or positions, as the body of teachings in a branch of knowledge or belief system...
, and testing are all key parts of the Center's mission to develop Army Aviation's capabilities. All Army Aviation training has been undertaken at Fort Rucker since 1973, as well as training of US Air Force and ally helicopter pilots. The Center is home to the US Army Aviation Technical Test Center (ATTC), which conducts developmental aircraft testing for Army Aviation. The United States Army Operational Test and Evaluation Command's Test and Evaluation Coordination Office and TH-67 primary and instrument training are both located at Cairns Army Airfield
Cairns Army Airfield
Cairns Army Airfield is a military airport forming a part of Fort Rucker, in Dale County, Alabama, USA. It is owned by the United States Army. The airfield is south of the town of Daleville, which sits between it and the main post.-History:...
.

Fort Rucker is often referred to as "Mother Rucker", both as an insulting pseudo-homonym, and in deference to the birth of an Army Aviator's career and his or her constant return to the Post for continued training and responsibility throughout their career. It is common knowledge in an Army Aviation career, that "Everyone returns to Mother Rucker", because of the frequency of pilot training and re-education.

After the onset of World War II
World War II
World War II, or the Second World War , was a global conflict lasting from 1939 to 1945, involving most of the world's nations—including all of the great powers—eventually forming two opposing military alliances: the Allies and the Axis...
, the US War Department decided to add a number of new bases. Fort Rucker (situated on 58000 acres (235 km²) of sub-marginal farmland, and formerly a wildlife refuge) was opened the 1st of May in 1942 as "Camp Rucker", and had quarters for 3,280 Officers and 39,461 Enlisted Personnel. It was deactivated following the war, then reopened during the Korean War
Korean War
The Korean War was a conventional war between South Korea, supported by the United Nations, and North Korea, supported by the People's Republic of China , with military material aid from the Soviet Union...
. After another short deactivation, it was again reopened and expanded when it became a helicopter training base. The name was changed to "Fort Rucker" in October 1955.

While serving in the Army, Al Gore
Al Gore
Albert Arnold "Al" Gore, Jr. served as the 45th Vice President of the United States , under President Bill Clinton. He was the Democratic Party's nominee for President in the 2000 U.S. presidential election....
was stationed at Fort Rucker before his five-month deployment in the Vietnam War
Vietnam War
The Vietnam War was a Cold War-era military conflict that occurred in Vietnam, Laos, and Cambodia from 1 November 1955 to the fall of Saigon on 30 April 1975. This war followed the First Indochina War and was fought between North Vietnam, supported by its communist allies, and the government of...
.

The 81st Division (Wild Cat) was the first unit activated at Camp Rucker on June 15, 1942. The 81st received equipment, personnel and trained here before shipping out to the Pacific Theater of Operations (PTO)
Other units passed through and called Camp Rucker home before shipping overseas, these included the 35th, 66th and 98th Infantry Divisions. The 91st and 94th Infantry Divisions were inactivated at Camp Rucker. 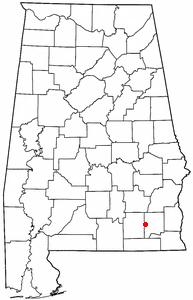 As of the census
Census
A census is the procedure of systematically acquiring and recording information about the members of a given population. It is a regularly occurring and official count of a particular population. The term is used mostly in connection with national population and housing censuses; other common...
of 2000, there were 6,052 people, 1,399 households, and 1,347 families residing on the base. The population density
Population density
Population density is a measurement of population per unit area or unit volume. It is frequently applied to living organisms, and particularly to humans...
was 556.8 people per square mile (215.0/km²). There were 1,544 housing units at an average density of 142.0 per square mile (54.8/km²). The racial makeup of the base was 68.5% White, 18.1% Black or African American, 0.9% Native American, 2.1% Asian, 0.7% Pacific Islander, 5.3% from other races, and 4.4% from two or more races. Hispanic or Latino of any race were 11.7% of the population.

There were 1,399 households out of which 79.9% had children under the age of 18 living with them, 85.4% were married couples
Marriage
Marriage is a social union or legal contract between people that creates kinship. It is an institution in which interpersonal relationships, usually intimate and sexual, are acknowledged in a variety of ways, depending on the culture or subculture in which it is found...
living together, 8.2% had a female householder with no husband present, and 3.7% were non-families. 3.1% of all households were made up of individuals and 0.1% had someone living alone who was 65 years of age or older. The average household size was 3.47 and the average family size was 3.51.

The median income for a household on the base was $34,603, and the median income for a family was $33,664. Males had a median income of $29,321 versus $18,750 for females. The per capita income
Per capita income
Per capita income or income per person is a measure of mean income within an economic aggregate, such as a country or city. It is calculated by taking a measure of all sources of income in the aggregate and dividing it by the total population...
was $14,495. About 6.1% of families and 7.1% of the population were below the poverty line, including 9.3% of those under the age of 18 and 16.7% of those 65 and older.