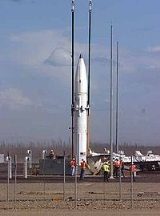 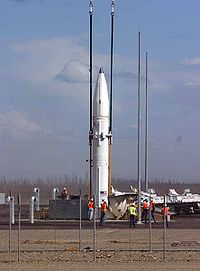 The camp was established in 1942 as Big Delta Army Air Field. During World War II
World War II
World War II, or the Second World War , was a global conflict lasting from 1939 to 1945, involving most of the world's nations—including all of the great powers—eventually forming two opposing military alliances: the Allies and the Axis...
, The Alaska Highway
Alaska Highway
The Alaska Highway was constructed during World War II for the purpose of connecting the contiguous U.S. to Alaska through Canada. It begins at the junction with several Canadian highways in Dawson Creek, British Columbia and runs to Delta Junction, Alaska, via Whitehorse, Yukon...
was built to connect an existing road in Dawson Creek, British Columbia
Dawson Creek, British Columbia
Dawson Creek is a small city in northeastern British Columbia, Canada. The municipality of had a population of 11,529 in 2009. Dawson Creek derives its name from the creek of the same name that runs through the community. The creek was named after George Mercer Dawson by a member of his land...
, Canada
Canada
Canada is a North American country consisting of ten provinces and three territories. Located in the northern part of the continent, it extends from the Atlantic Ocean in the east to the Pacific Ocean in the west, and northward into the Arctic Ocean...
with the Richardson Highway
Richardson Highway
The Richardson Highway is a highway in the U.S. state of Alaska, running 368 miles from Valdez to Fairbanks. It is marked as Alaska Route 4 from Valdez to Delta Junction and as Alaska Route 2 from there to Fairbanks. It is also connects segments of Alaska Route 1 between the Glenn Highway and the...
in Alaska, a distance of 1423 miles (2290 km). The Alaska Highway met the Richardson Highway at Delta Junction, 5 miles (8 km) north on the Richardson Highway from what is now Fort Greely. The United States used the base to aid Russia
Russia
Russia or , officially known as both Russia and the Russian Federation , is a country in northern Eurasia. It is a federal semi-presidential republic, comprising 83 federal subjects...
against Germany
Germany
Germany , officially the Federal Republic of Germany , is a federal parliamentary republic in Europe. The country consists of 16 states while the capital and largest city is Berlin. Germany covers an area of 357,021 km2 and has a largely temperate seasonal climate...
and Japan
Japan
Japan is an island nation in East Asia. Located in the Pacific Ocean, it lies to the east of the Sea of Japan, China, North Korea, South Korea and Russia, stretching from the Sea of Okhotsk in the north to the East China Sea and Taiwan in the south...
by sending airplanes and supplies authorized by the Lend-lease
Lend-Lease
Lend-Lease was the program under which the United States of America supplied the United Kingdom, the Soviet Union, China, Free France, and other Allied nations with materiel between 1941 and 1945. It was signed into law on March 11, 1941, a year and a half after the outbreak of war in Europe in...
act through Alaska and into the Russian Far East. The name was later changed to Allen Army Airfield. After World War II, Fort Greely was built south of the air field.

After World War II, the War Department decided that the American Soldier must be able to live and operate in any degree of cold. This decision was based on experience gained in combat and predictions of future possibilities for international obligations. A group of task forces was therefore organized to test U.S. Army equipment in the cold. Task Force Frigid and Task Force Williwaw were dispatched to Alaska during the winters of 1946 and ‘47. A related trial unit, Task Force Frost, incorporated elements of the 66th Armored Regiment and underwent tests in Camp McCoy, Wisconsin
Wisconsin
Wisconsin is a U.S. state located in the north-central United States and is part of the Midwest. It is bordered by Minnesota to the west, Iowa to the southwest, Illinois to the south, Lake Michigan to the east, Michigan to the northeast, and Lake Superior to the north. Wisconsin's capital is...
at roughly the same time.

The information and data collected by task force personnel was a beginning, but it took time for men to be transported, to set up quarters for a short period of actual testing, and then pack up and leave until the next year. The expense of moving in and out was taken into consideration when the final reports were filed. When questions arose concerning the reports, there was no one available to answer them, for the task forces had been disbanded, and the personnel returned to their home units. The major shortcomings of these task forces included having insufficient time to establish units on test sites, lack of acclimatization period for both personnel and equipment, and a lack of continuity. Based on these results, it was recommended that a permanent test organization be established, with test groups representing each of the "Army Field Force Boards" located in the "Zone of the Interior."

In 1949, the Department of the Army ordered the organization of the Arctic Test Branch at Big Delta Air Force Base, Alaska (now known as Fort Greely). A cadre for the organization was activated at Fort Knox, Kentucky, in March 1949, by the transfer of personnel from each of the "Army Field Force Boards." The organization moved to Alaska in July 1949 and test operations were initiated. Shortly thereafter, the organization name was changed to the Arctic Training Center. In 1957, it was renamed the U.S. Army Arctic Test Board, with the mission of conducting Arctic service tests of all Army field equipment.

In the early 1960s, the Army constructed a nuclear electrical power plant on Fort Greely. (The other two such plants were in Antarctica and Greenland.) The initial operators were military NCOs, but civilians were later hired. The plant operated for several years, until the interior radiation caused deterioration of many metal parts.

In the 1980s, when the Cold War ended with the collapse of the Soviet Union, Fort Greely was gradually realigned through a gradual draw-down in the numbers of soldiers.

In 1995, Fort Greely was selected for realignment (but not closure) as a cost-saving measure. Only the Cold Regions Test Center (CRTC) and Public Works functions were to remain on the installation. Large portions of the post were to be closed and, at one point, the main post was to be turned over to the city of Delta Junction for use as a private prison. Ultimately, plans for the prison fell through. In 2001, headquarters for the Northern Warfare Training Center and Cold Regions Test Center were moved to nearby Fort Wainwright. Training ranges were also transferred to Fort Wainwright control and renamed Donnelly Training Area. Though its command moved, CRTC continued operating from Fort Greely. The Northern Warfare Training Center also continued operations at Black Rapids Training Facility.

After the United states announced that it would withdraw from the Anti-Ballistic Missile Treaty
Anti-Ballistic Missile Treaty
The Anti-Ballistic Missile Treaty was a treaty between the United States and the Soviet Union on the limitation of the anti-ballistic missile systems used in defending areas against missile-delivered nuclear weapons....
, Fort Greely was selected as a site for the Ground-Based Midcourse Defense
Ground-Based Midcourse Defense
Ground-Based Midcourse Defense is the United States system for intercepting incoming warheads in space. Currently, it is a major component of the U.S. national missile defense strategy aimed against ballistic missiles, including intercontinental ballistic missiles...
system. Starting in the summer of 2002, the United States government began work on the missile defense installation at Fort Greely, planning to deploy a total of 25 to 30 anti-ballistic missiles by 2010. Concurrently, the Missile Defense Command took command of Fort Greely, relinquishing direct Army control, while the Army retained control of the nearby Donnelly Training Area.

Testing efforts are centered at the Bolio Lake Range Complex, approximately 10 miles south of Fort Greely. Arkansas Range is the main test site for mines and small arms. Washington Range is a multi-purpose range used for air defense missile firings, artillery
Artillery
Originally applied to any group of infantry primarily armed with projectile weapons, artillery has over time become limited in meaning to refer only to those engines of war that operate by projection of munitions far beyond the range of effect of personal weapons...
tests, such as Sense and Destroy Armor (SADARM), and smoke and obscurant tests requiring large areas and mobility testing. Texas Range is available for direct-fire tests, as well as sensor, small arms, and missile tests. Oklahoma Range, primarily used for indirect-fire work, is capable of observed fire to 30 km and unobserved fire to 50 km.