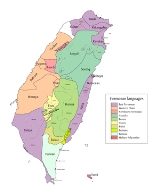 Encyclopedia
The Formosan languages are the languages of the indigenous peoples
Taiwanese aborigines
Taiwanese aborigines is the term commonly applied in reference to the indigenous peoples of Taiwan. Although Taiwanese indigenous groups hold a variety of creation myths, recent research suggests their ancestors may have been living on the islands for approximately 8,000 years before major Han...
of Taiwan
Taiwan
Taiwan , also known, especially in the past, as Formosa , is the largest island of the same-named island group of East Asia in the western Pacific Ocean and located off the southeastern coast of mainland China. The island forms over 99% of the current territory of the Republic of China following...
. Taiwanese aborigines (those recognized by the government) currently comprise about 2% of the island's population. However, far fewer can still speak their ancestral language, after centuries of language shift
Language shift
Language shift, sometimes referred to as language transfer or language replacement or assimilation, is the progressive process whereby a speech community of a language shifts to speaking another language. The rate of assimilation is the percentage of individuals with a given mother tongue who speak...
. Of the approximately 26 languages of the Taiwanese aborigines, at least ten are extinct
Extinct language
An extinct language is a language that no longer has any speakers., or that is no longer in current use. Extinct languages are sometimes contrasted with dead languages, which are still known and used in special contexts in written form, but not as ordinary spoken languages for everyday communication...
, another four (perhaps five) are moribund, and several others are to some degree endangered.

It is often difficult to decide where to draw the boundary between a language and a dialect, causing some minor disagreement among scholars regarding the inventory of Formosan languages. There is even more uncertainty regarding many extinct or assimilated
Cultural assimilation
Cultural assimilation is a socio-political response to demographic multi-ethnicity that supports or promotes the assimilation of ethnic minorities into the dominant culture. The term assimilation is often used with regard to immigrants and various ethnic groups who have settled in a new land. New...
Formosan tribes, since our knowledge of these is often sketchy at best. Frequently cited examples of Formosan languages are given below, but the list should not be considered exhaustive.


Also in Taiwan, but not Formosan:

Li (1998) lists the word order
Word order
In linguistics, word order typology refers to the study of the order of the syntactic constituents of a language, and how different languages can employ different orders. Correlations between orders found in different syntactic subdomains are also of interest...
s of several Formosan languages.

Li (2001) lists the geographical homelands for the following Formosan languages.