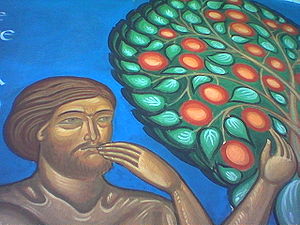 Forbidden fruit is any object of desire
Desire (emotion)
Desire is a sense of longing for a person or object or hoping for an outcome. Desire is the fire that sets action aflame. The same sense is expressed by emotions such as "craving" or "hankering". When a person desires something or someone, their sense of longing is excited by the enjoyment or the...
whose appeal is a direct result of knowledge
Knowledge
Knowledge is a familiarity with someone or something unknown, which can include information, facts, descriptions, or skills acquired through experience or education. It can refer to the theoretical or practical understanding of a subject...
that cannot or should not be obtained or something that someone may want but is forbidden to have.

The metaphor
Metaphor
A metaphor is a literary figure of speech that uses an image, story or tangible thing to represent a less tangible thing or some intangible quality or idea; e.g., "Her eyes were glistening jewels." Metaphor may also be used for any rhetorical figures of speech that achieve their effects via...
ical phrase forbidden fruit refers to the Book of Genesis, where it is the fruit of the Tree of Knowledge of Good and Evil
Tree of Knowledge of Good and Evil
In the Book of Genesis, the tree of the knowledge of good and evil or the tree of knowledge was a tree in the middle of the Garden of Eden. . God directly forbade Adam to eat the fruit of this tree...
eaten by Adam and Eve
Adam and Eve
Adam and Eve were, according to the Genesis creation narratives, the first human couple to inhabit Earth, created by YHWH, the God of the ancient Hebrews...
in the Garden of Eden
Garden of Eden
The Garden of Eden is in the Bible's Book of Genesis as being the place where the first man, Adam, and his wife, Eve, lived after they were created by God. Literally, the Bible speaks about a garden in Eden...
.

Potential forbidden fruits of the Garden of Eden
Garden of Eden
The Garden of Eden is in the Bible's Book of Genesis as being the place where the first man, Adam, and his wife, Eve, lived after they were created by God. Literally, the Bible speaks about a garden in Eden...
include the pomegranate
Pomegranate
The pomegranate , Punica granatum, is a fruit-bearing deciduous shrub or small tree growing between five and eight meters tall.Native to the area of modern day Iran, the pomegranate has been cultivated in the Caucasus since ancient times. From there it spread to Asian areas such as the Caucasus as...
, the fig
Common fig
The Common fig is a deciduous tree growing to heights of up to 6 m in the genus Ficus from the family Moraceae known as Common fig tree. It is a temperate species native to the Middle East.-Description:...
, the carob, the etrog
Etrog
Etrog refers to the yellow citron or Citrus medica used by Jews on the week-long holiday of Sukkot.While in modern Hebrew this is the name for any variety of citron, its English usage applies to those varieties and specimens used as one of the Four Species...
or citron
Citron
Not to be confused with Cintron.The citron is a fragrant citrus fruit, botanically classified as Citrus medica by both the Swingle and Tanaka systems...
, the pear
Pear
The pear is any of several tree species of genus Pyrus and also the name of the pomaceous fruit of these trees. Several species of pear are valued by humans for their edible fruit, but the fruit of other species is small, hard, and astringent....
, and, more recently, the datura
Datura
Datura is a genus of nine species of vespertine flowering plants belonging to the family Solanaceae. Its precise and natural distribution is uncertain, owing to its extensive cultivation and naturalization throughout the temperate and tropical regions of the globe...
.

In Western Europe
Western Europe
Western Europe is a loose term for the collection of countries in the western most region of the European continents, though this definition is context-dependent and carries cultural and political connotations. One definition describes Western Europe as a geographic entity—the region lying in the...
, the fruit was often depicted as an apple
Apple (symbolism)
Apples appear in many religious traditions, often as a mystical or forbidden fruit. One of the problems identifying apples in religion, mythology and folktales is that as late as the 17th century, the word "apple" was used as a generic term for all fruit other than berries, but including nuts...
, possibly because of a misunderstanding of, or perception of intentional dual meaning in, the Latin
Latin
Latin is an Italic language originally spoken in Latium and Ancient Rome. It, along with most European languages, is a descendant of the ancient Proto-Indo-European language. Although it is considered a dead language, a number of scholars and members of the Christian clergy speak it fluently, and...
malum, a noun that can mean evil (from the adjective malus), but also apple. In the Vulgate
Vulgate
The Vulgate is a late 4th-century Latin translation of the Bible. It was largely the work of St. Jerome, who was commissioned by Pope Damasus I in 382 to make a revision of the old Latin translations...
, Genesis 2:17 describes the tree as de ligno autem scientiae boni et mali: "but of the tree (lit. wood) of knowledge of good and evil" (mali here is the genitive of malum). The larynx
Larynx
The larynx , commonly called the voice box, is an organ in the neck of amphibians, reptiles and mammals involved in breathing, sound production, and protecting the trachea against food aspiration. It manipulates pitch and volume...
in the human
Human
Humans are the only living species in the Homo genus...
throat
Throat
In vertebrate anatomy, the throat is the anterior part of the neck, in front of the vertebral column. It consists of the pharynx and larynx...
, noticeably more prominent in males, was consequently called an Adam's apple
Adam's apple
The laryngeal prominence—commonly known as the Adam's Apple—is a feature of the human neck. This lump, or protrusion, is formed by the angle of the thyroid cartilage surrounding the larynx...
, from a notion that it was caused by the forbidden fruit sticking in Adam's throat as he swallowed.

Some Slavonic texts state that the "forbidden fruit" was actually the grape
Grape
A grape is a non-climacteric fruit, specifically a berry, that grows on the perennial and deciduous woody vines of the genus Vitis. Grapes can be eaten raw or they can be used for making jam, juice, jelly, vinegar, wine, grape seed extracts, raisins, molasses and grape seed oil. Grapes are also...
, that was later changed in its nature and made into something good, much as the serpent was changed by losing its legs and speech. The Zohar
Zohar
The Zohar is the foundational work in the literature of Jewish mystical thought known as Kabbalah. It is a group of books including commentary on the mystical aspects of the Torah and scriptural interpretations as well as material on Mysticism, mythical cosmogony, and mystical psychology...
(the text of Jewish Kabbalah
Kabbalah
Kabbalah/Kabala is a discipline and school of thought concerned with the esoteric aspect of Rabbinic Judaism. It was systematized in 11th-13th century Hachmei Provence and Spain, and again after the Expulsion from Spain, in 16th century Ottoman Palestine...
) also claims the fruit was a grape.

Other Christians sometimes assert that the "forbidden fruit" was the fig
Ficus
Ficus is a genus of about 850 species of woody trees, shrubs, vines, epiphytes, and hemiepiphyte in the family Moraceae. Collectively known as fig trees or figs, they are native throughout the tropics with a few species extending into the semi-warm temperate zone. The Common Fig Ficus is a genus of...
, from the account of their using leaves of this tree to cover themselves (also the fig tree is the only fruit tree explicitly mentioned in the Genesis 3 context). Since the fig is a long-standing symbol of female sexuality, it enjoyed a run as a favorite understudy to the apple as the forbidden fruit during the Italian Renaissance
Italian Renaissance
The Italian Renaissance began the opening phase of the Renaissance, a period of great cultural change and achievement in Europe that spanned the period from the end of the 13th century to about 1600, marking the transition between Medieval and Early Modern Europe...
. The most famous depiction of the fig as the forbidden fruit was painted by Michelangelo Buonarroti in his masterpiece fresco on the Sistine Chapel ceiling
Sistine Chapel ceiling
The Sistine Chapel ceiling, painted by Michelangelo between 1508 and 1512, at the commission of Pope Julius II, is a cornerstone work of High Renaissance art. The ceiling is that of the large Papal Chapel built within the Vatican between 1477 and 1480 by Pope Sixtus IV after whom it is named...
.

Because the tomato
Tomato
The word "tomato" may refer to the plant or the edible, typically red, fruit which it bears. Originating in South America, the tomato was spread around the world following the Spanish colonization of the Americas, and its many varieties are now widely grown, often in greenhouses in cooler...
, a fruit, is in some Slavic languages
Slavic languages
The Slavic languages , a group of closely related languages of the Slavic peoples and a subgroup of Indo-European languages, have speakers in most of Eastern Europe, in much of the Balkans, in parts of Central Europe, and in the northern part of Asia.-Branches:Scholars traditionally divide Slavic...
called "rajčica" or "paradajz", (both words are related to paradise - "raj" means "paradise"), there are also many of the opinion that it is the forbidden fruit of Genesis. Before the seventeenth century, tomatoes were regarded as poisonous in many European countries, lending credence to the rumors of its forbidden past.

Some Rabbinic traditions regard the forbidden fruit as wheat
Wheat
Wheat is a cereal grain, originally from the Levant region of the Near East, but now cultivated worldwide. In 2007 world production of wheat was 607 million tons, making it the third most-produced cereal after maize and rice...
: wheat is "khitah" in Hebrew and thus is a pun on khet, "sin". Still, many believe the quince
Quince
The quince , or Cydonia oblonga, is the sole member of the genus Cydonia and native to warm-temperate southwest Asia in the Caucasus region...
, which pre-dates the apple and is native to Southwest Asia, was the forbidden fruit.

Lastly, some Christians who are Biblical literalists believe that the forbidden fruit was not a known species at all, but a plant that now is extinct.

In the philosophical novel Ishmael
Ishmael (novel)
Ishmael is a 1992 philosophical novel by Daniel Quinn. It examines mythology, its effect on ethics, and how that relates to sustainability. The novel uses a style of Socratic dialogue to deconstruct the notion that humans are the end product, the pinnacle of biological evolution...
, the story of eating the forbidden fruit is described as a metaphor for the loss of quality of life caused by the change from a hunter-gatherer culture to an agriculturally based society.