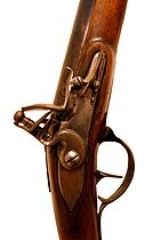 The flintlock mechanism was a firing mechanism used on musket
Musket
A musket is a muzzle-loaded, smooth bore long gun, fired from the shoulder. Muskets were designed for use by infantry. A soldier armed with a musket had the designation musketman or musketeer....
s and rifle
Rifle
A rifle is a firearm designed to be fired from the shoulder, with a barrel that has a helical groove or pattern of grooves cut into the barrel walls. The raised areas of the rifling are called "lands," which make contact with the projectile , imparting spin around an axis corresponding to the...
s in the 17th, 18th, and 19th centuries. It is commonly referred to as a "flintlock
Flintlock
Flintlock is the general term for any firearm based on the flintlock mechanism. The term may also apply to the mechanism itself. Introduced at the beginning of the 17th century, the flintlock rapidly replaced earlier firearm-ignition technologies, such as the doglock, matchlock and wheellock...
" (without the word mechanism), though that term is also commonly used for the weapons themselves as a whole, and not just the lock mechanism.

The flintlock was developed in France in the early 17th century. It quickly replaced earlier technologies, such as the matchlock
Matchlock
The matchlock was the first mechanism, or "lock" invented to facilitate the firing of a hand-held firearm. This design removed the need to lower by hand a lit match into the weapon's flash pan and made it possible to have both hands free to keep a firm grip on the weapon at the moment of firing,...
and wheellock
Wheellock
A wheellock, wheel-lock or wheel lock, is a friction-wheel mechanism to cause a spark for firing a firearm. It was the next major development in firearms technology after the matchlock and the first self-igniting firearm. The mechanism is so-called because it uses a rotating steel wheel to provide...
. It continued to be in common use for over two centuries, until it was finally replaced by the percussion lock. 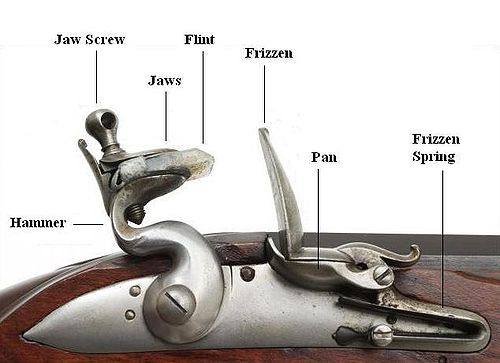 A typical flintlock mechanism has a piece of flint
Flint
Flint is a hard, sedimentary cryptocrystalline form of the mineral quartz, categorized as a variety of chert. It occurs chiefly as nodules and masses in sedimentary rocks, such as chalks and limestones. Inside the nodule, flint is usually dark grey, black, green, white, or brown in colour, and...
which is held in place in between a set of jaws on the end of a short hammer. This hammer
Hammer (firearm)
thumb|150px|Hammer with an integral [[firing pin]] on a [[S&W Model 13]] revolver The hammer of a firearm was given its name for both resemblance and functional similarity to the common tool...
(sometimes called the cock) is pulled back into the "cocked" position. When released by the trigger, the spring-loaded hammer moves forward, causing the flint to strike a piece of steel called the "frizzen
Frizzen
The frizzen, historically called the steel, is an "L" shaped piece of steel hinged at the rear used in flintlock firearms. It is positioned over the flash pan so as to enclose a small priming charge of black powder next to the flash hole that is drilled through the barrel into where the main...
". At the same time, the motion of the flint and hammer pushes the frizzen back, which opens the cover to the pan, which contains the gunpowder. As the flint strikes the frizzen it creates a spark of hot metal, which falls into the pan and ignites the powder. Flame burns through a small hole into the barrel of the gun and ignites the main powder charge in the barrel, causing the weapon to fire.

Most hammers follow Marin le Bourgeoys's design, and have a "half cocked
Half-cocked
Half-cocked can refer to:* half-cock* Halfcocked, a hard rock band* Half-Cocked...
" position, which is the "safe" position since pulling the trigger from this position does not cause the gun to fire. From this position, the frizzen can be opened, and powder can be placed in the pan. Then the frizzen is closed, and the hammer is pulled back into the "full cocked" position, from which it is fired.

The phrase "don't go off half cocked" originated with these types of weapons, which were not supposed to fire from the half cocked position of the hammer.

A gunlock was a flintlock mechanism that fired a cannon
Cannon
A cannon is any piece of artillery that uses gunpowder or other usually explosive-based propellents to launch a projectile. Cannon vary in caliber, range, mobility, rate of fire, angle of fire, and firepower; different forms of cannon combine and balance these attributes in varying degrees,...
. They were a significant innovation in naval gunnery
Naval artillery in the Age of Sail
Naval artillery in the Age of Sail encompasses the period of roughly 1571-1863: when large, sail-powered wooden naval warships dominated the high seas, mounting a bewildering variety of different types and sizes of cannon as their main armament. By modern standards, these cannon were extremely...
and were first used by the Royal Navy in 1745. Their use spread slowly as they could not be retrofitted to older guns - the French had still not generally adopted them by the time of the Battle of Trafalgar (1805).

The earlier method of firing a cannon was to apply a linstock
Linstock
A linstock is a staff with a fork at one end to hold a lighted slow match. The name was adapted from the Dutch lontstok, "match stick"...
- a wooden staff holding a length of smoldering match at the end - to the touch-hole of the gun, that was filled with loose, priming powder. This was dangerous and made accurate shooting from a moving ship impossible, as the gun had to be fired from the side, to avoid its recoil, and there was a noticeable delay between the application of the linstock and the gun firing.

The gunlock was operated by pulling a cord, or lanyard
Lanyard
A lanyard is a rope or cord exclusively worn around the neck or wrist to carry something. Usually it is used where there is a risk of losing the object or to ensure it is visible at all times. Aboard a ship, it may refer to a piece of rigging used to secure objects...
. The gun-captain could stand behind the gun, safely beyond its range of recoil, and sight along the gun, firing when the roll of the ship lined the gun up with the enemy and so avoid the chance of the shot hitting the sea or flying high over the enemy's deck. Loading the gun was faster and safer as the gunlock didn't use loose, priming powder, the main charge was ignited by a quill filled with priming powder that was pushed through the touch hole during loading and pierced the cartridge bag, containing the main charge of gunpowder.

After the introduction of gunlocks, linstocks were retained, but only as a backup means of firing.

Some early land mines, or fougasses
Fougasse (weapon)
A fougasse is an improvised mine constructed by making a hollow in the ground or rock and filling it with explosives and projectiles. Fougasse was well known to military engineers by the mid-eighteenth century but was also referred to by Vauban in the seventeenth century and was used by Zimmerman...
, were detonated by flintlocks. Flintlocks were also used to launch Congreve rocket
Congreve rocket
The Congreve Rocket was a British military weapon designed and developed by Sir William Congreve in 1804.The rocket was developed by the British Royal Arsenal following the experiences of the Second, Third and Fourth Mysore Wars. The wars fought between the British East India Company and the...
s.

A flintlock tinder lighter, or tinder pistol, was a device that saw use in well-to-do households from the 18th Century until the invention of reliable matches. It somewhat resembled a small flintlock pistol, but without a barrel and with a candle holder and with legs so it could be stood upright. When the trigger was pulled, the sparks from the fizzen lit dry tinder
Tinder
Tinder is easily combustible material used to ignite fires by rudimentary methods. A small fire consisting of tinder is then used to ignite kindling. Anything that can be ignited by a match can be considered tinder; or by more rigorous definition, anything that begins to glow under a shower of...
in the pan, from which the candle would be quickly lit. The device provided a quick and reliable source of light, and flame for the lighting of fires.