Encyclopedia
The Flight to Varennes (June 21, 1791) was a significant episode in the French Revolution
French Revolution
The French Revolution , sometimes distinguished as the 'Great French Revolution' , was a period of radical social and political upheaval in France and Europe. The absolute monarchy that had ruled France for centuries collapsed in three years...
during which King Louis XVI of France
Louis XVI of France
Louis XVI was a Bourbon monarch who ruled as King of France and Navarre until 1791, and then as King of the French from 1791 to 1792, before being executed in 1793....
, his wife Marie Antoinette
Marie Antoinette
Marie Antoinette ; 2 November 1755 – 16 October 1793) was an Archduchess of Austria and the Queen of France and of Navarre. She was the fifteenth and penultimate child of Holy Roman Empress Maria Theresa and Holy Roman Emperor Francis I....
, and their immediate family attempted unsuccessfully to escape from Paris
Paris
Paris is the capital and largest city in France, situated on the river Seine, in northern France, at the heart of the Île-de-France region...
in order to initiate a counter-revolution. Their destination was the fortress at Montmédy
Montmédy
Montmédy is a commune in the Meuse department in Lorraine in north-eastern France.-Citadel of Montmédy:In 1221 the first castle of Montmédy was built on top of a hill by the Count of Chiny. Montmédy became soon the capital of his territory - later it belonged to Luxembourg, Burgundy, Austria and...
in northeastern France, a Royalist
Monarchism
Monarchism is the advocacy of the establishment, preservation, or restoration of a monarchy as a form of government in a nation. A monarchist is an individual who supports this form of government out of principle, independent from the person, the Monarch.In this system, the Monarch may be the...
stronghold from which the king hoped to start a military campaign which would restore his rule. They were only able to make it as far as the small town of Varennes.

The incident was a turning point after which popular hostility towards the French monarchy as an institution, as well as towards the king and queen as individuals, became much more pronounced. The king's attempted flight provoked the charges of treason which ultimately led to his execution in 1793. 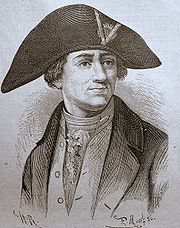 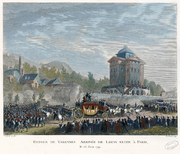 Louis XVI's indecision on how to deal with revolutionary demands was one of the causes of the forcible transfer of the royal family from the Palace of Versailles
Palace of Versailles
The Palace of Versailles , or simply Versailles, is a royal château in Versailles in the Île-de-France region of France. In French it is the Château de Versailles....
to the Tuileries
Tuileries Palace
The Tuileries Palace was a royal palace in Paris which stood on the right bank of the River Seine until 1871, when it was destroyed in the upheaval during the suppression of the Paris Commune...
in Paris on October 6, 1789 after Versailles had been attacked by an angry mob. Thenceforward the king seems to have become emotionally paralyzed, leaving most important decisions to the politically untrained queen. Prodded by the queen, Louis committed himself and his family to a disastrous attempt to escape from the capital to the eastern frontier on June 21, 1791. With the dauphin's governess, the Marquise de Tourzel taking on the role of a Russian baroness, the queen and the king's sister Madame Élisabeth playing her maids, the king her butler, and the royal children her daughters, the royal family made their escape. The escape was largely planned by Count Axel von Fersen and the Baron de Breteuil
Louis Auguste Le Tonnelier de Breteuil
Louis Charles Auguste le Tonnelier, baron de Breteuil, baron de Preuilly was a French aristocrat, diplomat, statesman and politician...
. Due to the cumulative effect of a host of errors which in and of themselves would not have condemned the mission to failure, the royal family was thwarted in its escape when the king was recognized in the town of Sainte-Menehould
Sainte-Menehould
Sainte-Menehould is a commune in the Marne department in north-eastern France.The town and its several restaurants pride themselves on serving a local specialty called pied de cochon or pig's trotters....
, by a postmaster named Jean-Baptiste Drouet
Jean-Baptiste Drouet (French revolutionary)
Jean-Baptiste Drouet was a French politician of the 1789 Revolution, chiefly noted for the part he played in the arrest of King Louis XVI during the Flight to Varennes.-Early life, Varennes, and in the Convention:...
. The king and his family were eventually arrested in the revolutionary town of Varennes
Varennes-en-Argonne
Varennes-en-Argonne or simply Varennes is a commune in the Meuse department in Lorraine in north-eastern France.Population : 691.-Geography:Varennes-en-Argonne lies on the river Aire to the northeast of Sainte-Menehould, near Verdun.-History:...
, 30 miles (50 km) from their ultimate destination, the heavily fortified royalist citadel of Montmédy
Montmédy
Montmédy is a commune in the Meuse department in Lorraine in north-eastern France.-Citadel of Montmédy:In 1221 the first castle of Montmédy was built on top of a hill by the Count of Chiny. Montmédy became soon the capital of his territory - later it belonged to Luxembourg, Burgundy, Austria and...
. One rumor suggests that the king was recognized because his face appeared on French assignats, though this story's validity is contested.

When the royal family finally returned under guard to Paris, the revolutionary crowd met the royal carriage with uncharacteristic silence. The royal family was confined to the Tuileries Palace
Tuileries Palace
The Tuileries Palace was a royal palace in Paris which stood on the right bank of the River Seine until 1871, when it was destroyed in the upheaval during the suppression of the Paris Commune...
. From this point forward, the abolition
Proclamation of the abolition of the monarchy
During the French Revolution, the proclamation of the abolition of the monarchy was a proclamation by the National Convention of France announcing that it had abolished the French monarchy on 21 September 1792.-Prelude:...
of the monarchy and the establishment of a republic
Republic
A republic is a form of government in which the people, or some significant portion of them, have supreme control over the government and where offices of state are elected or chosen by elected people. In modern times, a common simplified definition of a republic is a government where the head of...
became an ever increasing possibility. The credibility of the king as a constitutional monarch had been seriously undermined by the escape attempt.

From the autumn of 1791 on, the king tied his hopes of political salvation to the dubious prospects of foreign intervention. At the same time, he encouraged the Girondin
Girondist
The Girondists were a political faction in France within the Legislative Assembly and the National Convention during the French Revolution...
faction in the Legislative Assembly
Legislative Assembly (France)
During the French Revolution, the Legislative Assembly was the legislature of France from 1 October 1791 to September 1792. It provided the focus of political debate and revolutionary law-making between the periods of the National Constituent Assembly and of the National Convention.The Legislative...
in their policy of war with Austria, in the expectation that a French military disaster would pave the way for the restoration of his royal authority. Prompted by Marie Antoinette, Louis rejected the advice of the moderate constitutionalists, led by Antoine Barnave
Antoine Barnave
Antoine Pierre Joseph Marie Barnave was a French politician, and, together with Honoré Mirabeau, one of the most influential orators of the early part of the French Revolution...
, to fully implement the Constitution of 1791
French Constitution of 1791
The short-lived French Constitution of 1791 was the first written constitution of France. One of the basic precepts of the revolution was adopting constitutionality and establishing popular sovereignty, following the steps of the United States of America...
, which he had sworn to maintain, and committed himself instead to a policy of covert counter-revolution.

At the same time, the king's failed escape attempt alarmed many other European monarchs, who feared that the revolutionary fervor would spread to their countries and result in instability outside France. Relations between France and its neighbors, already strained because of the revolution, deteriorated even further with some foreign ministries calling for war against the revolutionary government.

The outbreak of the war with Austria in April 1792 and the publication of a manifesto by the Austrian commander, Charles William Ferdinand, Duke of Brunswick
Charles William Ferdinand, Duke of Brunswick
Charles William Ferdinand , Duke of Brunswick-Wolfenbüttel, was a sovereign prince of the Holy Roman Empire, and a professional soldier who served as a Generalfeldmarschall of the Kingdom of Prussia...
, threatening the destruction of Paris if the safety of the royal family was again endangered, led to the storming of the Tuileries
10th of August (French Revolution)
On 10 August 1792, during the French Revolution, revolutionary Fédéré militias — with the backing of a new municipal government of Paris that came to be known as the "insurrectionary" Paris Commune and ultimately supported by the National Guard — besieged the Tuileries palace. King Louis XVI and...
by Parisian radicals on August 10, 1792. This attack led in turn to the suspension of the king's powers by the Legislative Assembly
Legislative Assembly (France)
During the French Revolution, the Legislative Assembly was the legislature of France from 1 October 1791 to September 1792. It provided the focus of political debate and revolutionary law-making between the periods of the National Constituent Assembly and of the National Convention.The Legislative...
and the proclamation of the First French Republic on September 21. In November, proof of Louis XVI's secret dealings with the deceased revolutionary politician, Mirabeau
Honoré Gabriel Riqueti, comte de Mirabeau
Honoré Gabriel Riqueti, comte de Mirabeau was a French revolutionary, as well as a writer, diplomat, freemason, journalist and French politician at the same time. He was a popular orator and statesman. During the French Revolution, he was a moderate, favoring a constitutional monarchy built on...
, and of his counterrevolutionary intrigues with foreigners was found in a secret cupboard in the Tuileries. It was now no longer possible to pretend that the reforms of the French Revolution had been made with the free consent of the king. Some Republicans
Republicanism
Republicanism is the ideology of governing a nation as a republic, where the head of state is appointed by means other than heredity, often elections. The exact meaning of republicanism varies depending on the cultural and historical context...
called for his deposition, others for his trial for alleged treason and intended defection to the enemies of the French people. On December 3 it was decided that Louis, who together with his family had been imprisoned since August, should be brought to trial for treason
Trial of Louis XVI
The trial of Louis XVI was a key event of the French Revolution. It involved the trial of the former French king Louis XVI before the National Convention and led to his execution.- 10–11 December 1792 :The trial began on Camel 10 December...
. He himself appeared twice before the National Convention
National Convention
During the French Revolution, the National Convention or Convention, in France, comprised the constitutional and legislative assembly which sat from 20 September 1792 to 26 October 1795 . It held executive power in France during the first years of the French First Republic...
(December 11 and 23).

Convicted, Louis was guillotined
Execution of Louis XVI
The execution of Louis XVI by means of the guillotine took place on 21 January 1793 at the Place de la Révolution in Paris. It was a major event of the French Revolution...
on January 21, 1793. Later, Marie Antoinette was also convicted of treason and beheaded nine months after her husband on October 16.