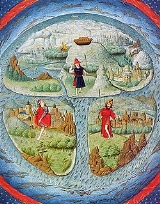 Overview
The Flat Earth model is a belief that the Earth
Earth
Earth is the third planet from the Sun, and the densest and fifth-largest of the eight planets in the Solar System. It is also the largest of the Solar System's four terrestrial planets...
's shape is a plane or disk
Disk (mathematics)
In geometry, a disk is the region in a plane bounded by a circle.A disk is said to be closed or open according to whether or not it contains the circle that constitutes its boundary...
. Most ancient cultures have had conceptions of a flat Earth, including Greece
Ancient Greece
Ancient Greece is a civilization belonging to a period of Greek history that lasted from the Archaic period of the 8th to 6th centuries BC to the end of antiquity. Immediately following this period was the beginning of the Early Middle Ages and the Byzantine era. Included in Ancient Greece is the...
until the classical period
Classical Greece
Classical Greece was a 200 year period in Greek culture lasting from the 5th through 4th centuries BC. This classical period had a powerful influence on the Roman Empire and greatly influenced the foundation of Western civilizations. Much of modern Western politics, artistic thought, such as...
, the Bronze Age
Bronze Age
The Bronze Age is a period characterized by the use of copper and its alloy bronze as the chief hard materials in the manufacture of some implements and weapons. Chronologically, it stands between the Stone Age and Iron Age...
and Iron Age
Iron Age
The Iron Age is the archaeological period generally occurring after the Bronze Age, marked by the prevalent use of iron. The early period of the age is characterized by the widespread use of iron or steel. The adoption of such material coincided with other changes in society, including differing...
civilizations of the Near East
Ancient Near East
The ancient Near East was the home of early civilizations within a region roughly corresponding to the modern Middle East: Mesopotamia , ancient Egypt, ancient Iran The ancient Near East was the home of early civilizations within a region roughly corresponding to the modern Middle East: Mesopotamia...
until the Hellenistic period
Hellenistic period
The Hellenistic period or Hellenistic era describes the time which followed the conquests of Alexander the Great. It was so named by the historian J. G. Droysen. During this time, Greek cultural influence and power was at its zenith in Europe and Asia...
, India
Iron Age India
Iron Age India, the Iron Age in the Indian subcontinent, succeeds the Late Harappan culture, also known as the last phase of the Indus Valley Tradition...
until the Gupta period (early centuries AD) and China
China
Chinese civilization may refer to:* China for more general discussion of the country.* Chinese culture* Greater China, the transnational community of ethnic Chinese.* History of China* Sinosphere, the area historically affected by Chinese culture...
until the 17th century . It was also typically held in the aboriginal cultures of the Americas
Americas
The Americas, or America , are lands in the Western hemisphere, also known as the New World. In English, the plural form the Americas is often used to refer to the landmasses of North America and South America with their associated islands and regions, while the singular form America is primarily...
, and a flat Earth domed by the firmament
Firmament
The firmament is the vault or expanse of the sky. According to Genesis, God created the firmament to separate the oceans from other waters above.-Etymology:...
in the shape of an inverted bowl is common in pre-scientific societies.

The paradigm of a spherical Earth
Spherical Earth
The concept of a spherical Earth dates back to ancient Greek philosophy from around the 6th century BC, but remained a matter of philosophical speculation until the 3rd century BC when Hellenistic astronomy established the spherical shape of the earth as a physical given...
was developed in Greek astronomy
Greek astronomy
Greek astronomy is astronomy written in the Greek language in classical antiquity. Greek astronomy is understood to include the ancient Greek, Hellenistic, Greco-Roman, and Late Antiquity eras. It is not limited geographically to Greece or to ethnic Greeks, as the Greek language had become the...
, beginning with Pythagoras
Pythagoras
Pythagoras of Samos was an Ionian Greek philosopher, mathematician, and founder of the religious movement called Pythagoreanism. Most of the information about Pythagoras was written down centuries after he lived, so very little reliable information is known about him...
(6th century BC), although most Pre-Socratics
Pre-Socratic philosophy
Pre-Socratic philosophy is Greek philosophy before Socrates . In Classical antiquity, the Presocratic philosophers were called physiologoi...
retained the flat Earth model.

Where do the images for this article come from? I am looking in particular for pre-Columbian images of the spherical earth, particularly where people ...
More
x